The return of the Chicano activist Brown Buffalo

The return of the Chicano activist Brown Buffalo 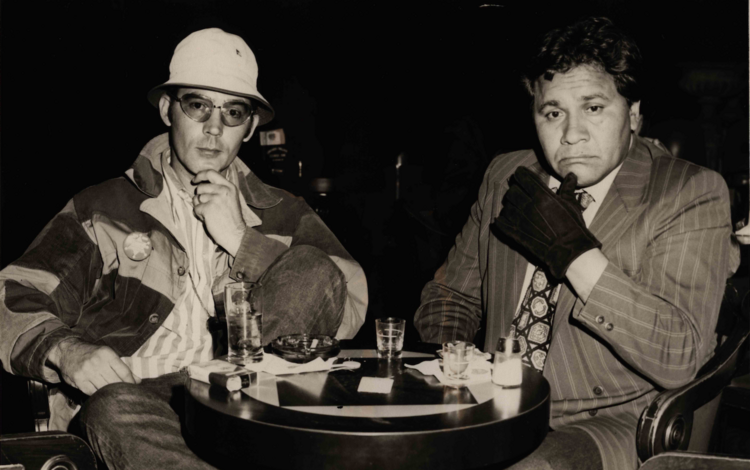 Oscar Zeta Acosta (right) and Hunter S. Thompson in Las Vegas, 1971. Their trip would become the basis for Thompson's renown "Fear and Loathing in Las Vegas". (Press kit photo courtesy of "The Rise and Fall of Brown Buffalo").

If Oscar Zeta Acosta is remembered at all, it is not as a fighter for Chicano civil rights. It is not even as a Chicano. Acosta has gone down in history as “Dr. Gonzo,” Hunter S. Thompson’s companion in the film “Fear and Loathing in Las Vegas.” Thompson describes Dr. Gonzo as Samoan, and the character comes across as an even more irresponsible, hedonistic buffoon than Thompson himself. But the real Acosta was more than just another 1960s druggie. He was a Baptist missionary, a peach-picker, a lawyer, an activist and a visionary. Above all, he was “the Brown Buffalo,” the name he chose for himself because, as he put it, the buffalo is “the animal everyone is out to get.”

Decades after Oscar Zeta Acosta’s disappearance in Mexico, a new documentary aims to reintroduce him in the context of the Chicano movement.

Now, decades after Acosta’s 1974 disappearance in Mexico, a new documentary aims to reintroduce him in the context of the Chicano movement. “The Rise and Fall of Brown Buffalo,” directed by Philip Rodriguez and airing on PBS on March 23, presents a complex portrait of Acosta as a man rife with contradictions. He was fearless, angered by injustice and constantly wrestling with his own demons. His childhood was traumatic; he was subject to abuse at home and racial humiliation at school. In his youth, Acosta tried to assimilate. But ultimately it was connection to his own people that he sought. In Los Angeles, at the height of the Chicano movement, he would find the community he longed for.

The documentary provides a valuable snapshot of the United States’ largest minority group in an era of revolt, showing how Mexican-American youth organized and demonstrated from Denver to Los Angeles. They demanded better schools, equal treatment in the criminal justice system and fair labor conditions for farmworkers. They wanted to stop being sent off to fight in Vietnam and to learn their own history in the classroom. Above all, they reimagined themselves not as undeserving foreigners but as natives in a stolen land—proudly “Chicano,” a once derogatory term now reclaimed as their own.

“The Rise of Brown Buffalo” provides a valuable snapshot of the United States’ largest minority group in an era of revolt.

Presented as a “dramatization,” the unconventional documentary uses actors to portray its real-life characters. An actor playing Acosta narrates the film, and scenes from his life are staged as if in a play. The technique can feel gimmicky, but it is an earnest attempt to bring a story that lacks many visual aids to life. Notable are the cameos made by prominent Latino politicians, often portraying the more assimilated “Mexican-Americans” Acosta accused of forgetting their own race (despite his own years of attempting to assimilate). The cameos remind us of how far the Chicano community has come. Among the actors is Antonio Villaraigosa, the former mayor of Los Angeles who is now running for governor. If elected, he would be the first person of Mexican-origin to hold the office.

Such a political achievement would have been inconceivable in Acosta’s time and would represent the progress that Acosta, for all his flaws, helped advance. Despite his inexperience, Acosta served as the main trial lawyer for the East LA 13, the young organizers of the historic 1968 Chicano high school walkouts. He was also present at the Chicano Moratorium, one of the largest anti-war demonstrations in the country, born of resentment over Chicanos’ disproportionately high casualty rates in Vietnam. He also wrote two autobiographical novels, chronicling his involvement in the cause and the heady days of the Chicano movement.

PBS’ “Brown Buffalo” is an overdue acknowledgment for a forgotten figure in U.S. history. It was Acosta who first spoke to me of my race. The first book I read with the word “Chicano” in it was Acosta’s Revolt of the Cockroach People, which I stumbled upon in the public library. Reading his words was the first time I felt unabashed pride in who I am.

“So what is it? Am I ashamed of my race? Who has brought me to this detestable place?” Acosta wrote. The documentary answers his questions, pointing to his upbringing at a time when Chicanos could not use the swimming pool or ask a white girl out on a date. Though much has improved since Acosta’s time, hatred of Mexico and of Mexicans remains endemic in our society. To be Mexican-American today is to watch your country build a wall against your kin. Acosta demonstrates how to rebel against the wall of the hyphen and to be at peace with ourselves.

Are you Latino or Hispanic?
J.D. Long-García

Compared to the giants of the Civil Rights era, Acosta did not accomplish much. His run for L.A. County sheriff in 1970 was certainly more about making a point than achieving lasting change. But by imagining the impossible, Acosta foresaw changes still to come. In his own lifetime, U.S. society simply did not want to listen to a fat brown man. But Acosta did not care, and he lived and died on his own terms. For that he will be remembered—not as “Dr. Gonzo,” part of the counterculture the real Acosta ultimately denounced as “white acid,” blind to the struggles of oppressed people. Perhaps he will finally be known as “the Brown Buffalo,” a voice for the Chicano people who are only now beginning to claim our proper place in this country.

This article also appeared in print, under the headline “A Chicano activist reclaimed from history’s margins,” in the April 16, 2018, issue.