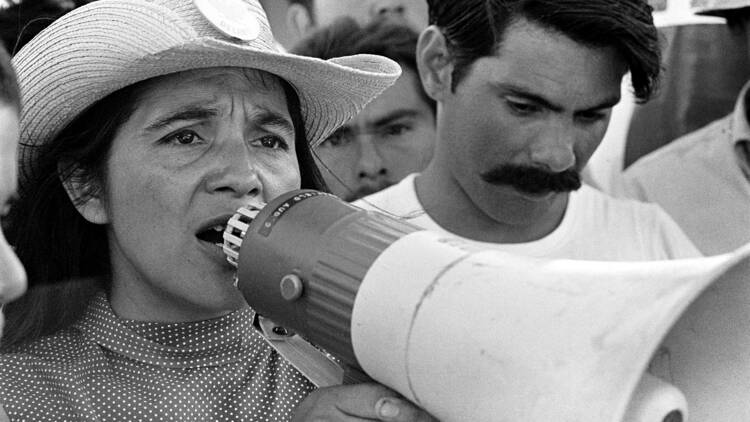 Living in the United States, a nation divided among racial and cultural lines, you would be forgiven for thinking that you are living in a 1950s television rerun. Perhaps that is why the arrival of the new documentary “Dolores” feels so timely. Directed by Peter Bratt, produced by musician Carlos Santana and distributed by PBS, “Dolores” tells the story of Dolores Huerta, the activist who co-founded the United Farm Workers union with Cesar Chavez and helped to articulate a growing Latino political consciousness.

Although the documentary at times feels like a made-to-order response to the age of Trump, the film’s real purpose is confronting older injustices, chief among them Dolores Huerta’s relative obscurity. In doing so it invites us all to reflect on the politics of memory: What do we remember, what do we forget, and why?

Huerta’s lack of recognition is certainly not due to a lack of proximity to power; she stood alongside giants of American history. She was thanked by name by Robert Kennedy as she stood beside him on the night he was assassinated. She was presented with the Presidential Medal of Freedom by Barack Obama, who concedes that it was Huerta who first uttered the phrase si se puede, which Obama translated into “yes we can”—the slogan of his 2008 campaign. In the documentary, Hillary Clinton, Gloria Steinem and Angela Davis are interviewed to attest to Huerta’s influence.

The most powerful interviews of “Dolores,” however, are not with these celebrities, or even with Dolores herself, but with her children. We see the personal cost that a lifetime of activism exacted on a real family.

Obama concedes that it was Huerta who first uttered the phrase si se puede, which Obama translated into “yes we can”—the slogan of his 2008 campaign.

Determined to live like the people she served, Huerta made her family live in voluntary poverty. When organizing work for the farmworkers’ movement, it would often take her far from home, Huerta would then leave her children alone or in the custody of friends. Huerta’s status as a twice-divorced single mother of 11 children by 3 men was often criticized, even within activist circles.

Neither Huerta nor her now-adult children shy away from describing the pain and tensions these decisions caused. Huerta’s willing sacrifice of herself and her children is sobering and, if you are to believe the documentary, a painful but necessary step in her quest for social progress. “We’ve all learned we’re not afraid to struggle, we’re not afraid to sacrifice, because you can’t make change if you’re not willing to give something up,” Dolores says at one point. Without a doubt, she walked the walk.

History is brought to life in “Dolores” with visceral footage of violence and the bitter fight for justice in the fields. Occurring parallel to the civil rights movement in the South, the farmworkers’ movement led to similar scenes of confrontation with police enforcing racial and economic stratification. The bitterness of these clashes is felt in the description a farmworker offers of Dolores as “the first general I followed into war.”

Determined to live like the people she served, Huerta made her family live in voluntary poverty.

Growing up as a Mexican-American in California’s central valley, I had heard these stories. And in “Dolores,” they are presented in full, saturated, color; the red flags of the U.F.W. blazing against the gold-green background of the land.

The film ends in the present day with the decision by Arizona Republicans to ban Mexican-American studies classes in high schools. This was in part due to a controversial comment that Dolores Huerta made in a talk to an ethnic studies class: “Republicans hate Latinos.” Arizona Republicans responded by denying Latino children their history. After the film’s completion a court struck down the Arizona ban on ethnic studies as unconstitutional. Perhaps one day soon this film will play in a classroom full of Latino children.

But the film does not address the question I have always had: If Chavez, Huerta and the U.F.W. were so successful, why are farmworkers still so marginalized today? When I worked in an after-school program in a camp for migrant farmworkers, many of the children had never heard of Chavez, let alone Huerta. None of their parents worked under a union contract, and many still toil under awful conditions. What did all the sacrifice we witness in the film accomplish? The Central Valley is still a land of agriculture, small towns and racial inequity hidden behind the veneer of “progressive” California. The story of Dolores Huerta inspires me to imagine a world where that will not be the case. The political battles over Latinos’ right to be in the United States feel more contentious than ever. Yet as the film concludes—with Huerta surrounded by her children—I was reminded that this struggle is generational. Dolores Huerta’s final legacy will depend on how the next generations, including my own, receive, carry and ultimately pass on the torch of her struggle. The film cannot answer all the questions it raises, but it can keep those questions in our memory.

Antonio De Loera-Brust is an Joseph A. O’Hare fellow at America.

In the past decade or so historians have researched deeply into the lives of Chavez and Huerta. What they found was that Heurta was complicit in Chavez's growing instability. Chavez fell in with the founder of Synanon and dragged the UFW in with him, creating a disturbing commitment to "the Game." Matt Garcia's FROM THE JAWS OF VICTORY (University of California Press, 2012) is a sobering account of the UFW's fall. Among other things, it reminds us to be cautious in turning flesh-and-blood leaders into heroes.

Let's see if this reporter and this website actually reports on this atrocity by the UFW union (which Dolores Huerta is part of); or if they'll turn their back on THOUSANDS of REAL farmworkers; the 99% of California's farmworkers: https://www.freshfruitportal.com/news/2017/09/13/california-farmworker-dues-pay-us1-2m-ufw-internal-strife/

The author of this piece seems to have falling into the same trap of the Arizona Republicans to promotion an Un-Catholic approach to God's Children. He says, "Perhaps one day soon this film will play in a classroom full of Latino children". Why just "Latino children"? Does he to wish to keep them hidden? This viewpoint of the separation of God's children should never be the Church's position and should be critized whenever preached, especially in a Catholic magazine. The better classroom is a classroom with children of all mixed heritages and histories watching this film and other similar films of different histories talking and learning to appreciate each other's value in their lives. Change is brought about in a classroom of differences, where their histories are shared and respected with each other. This is the future classroom that saves us all.

Possibly Huerta is not remembered for the same reason that the author does not remember Larry Itliong, one of the THREE founders of the UFW. Itliong was leader and founder of the Agricultural Workers Organizing Committee (AWOC). It was the AWOC that initiated the Delano grape strike. The National Farm Worker's association of Huerta and Chavez then joined the AWOC to form the UFW. On the other hand perhaps Mr. DeLoera-Brust doesn't remember Larry Itliong because he was a Filipino and not a Mexican-American. Unlike Chavez, Itliong did not have an army of lawyers, PR people, and Hollywood sycophants.

There were many advances made, after the death of Cesar Chavez, the media went away, and many of the laws passed the Corporate growers have found ways to get around. The root of the cause has not been dealt with and applys to all of us, not just farmworkers, primarily beliefs of inequality instead of Equality or Equal Rights and Concern for one another.
The Creative Force, Power, Being, by what ever name or language you use, cannot be limited to just the male sex!
Just as The Universally found Golden Rule of Loving others as you you are most capable of Loving Yourself, cannot apply to just self, but equally to others.
Some narrow it to just those who are like themselves, but that is a very narrow definition, and another form of selfishness and turns into a negative, because it limits and isolates the Holiness = Wholeness of Love.
It is included in the Prophecy of "Equality" because it applys to all, in the most creative sense!
THE PROPHECY OF “EQUALITY”
The practice of inequality and unfair hoarding of profits, most created by workers and consumers, are needed for the people’s needs and not just used for a few, or in power wars as for hundreds of years now! Maybe why I was shown God’s Hand at five years old, and not another such sign for over 25 years when given just the One Word of “Equality”.

“Equality” means people, regardless of their sex or race have Equal Rights. Also called The Golden Rule: to treat each other with Equal Respect and Concern!
Males in control when writing scriptures, hid the feminine nature of God with Patriarchal languages using only male nouns or pronouns to limit God, creating a form of idolatry. Yet the first and official Priestly version in Genesis 1:27, and the third Creation story beginning in Chapter 5:1, tell us male and female were both created in the God’s Image.
In the Aramaic language spoken in Jesus time. “ABBA” for God meant “Our Heavenly Parent” (AB for Dad and BA for Mom), and not just a “Father”. (Gotten in Old City of Jerusalem Armenian Monastery Library, from oldest Aramaic definition of "ABBA" the language of the people in Jesus's time.)

Within Christian Churches Pope Francis could help most to end discrimination, especially for the female half, and be an example to ending inequality in our world. Clearly stated since Vatican II, in the Pastoral Constitution, article 29+, “to end discrimination because of race or sex…as not the Will of God”.
Please share especially with His Holiness Pope Francis. May need international stamp, Vatican City State, in Rome, Italy 00120.

I agree with Vince Killoran and Michael Baland in their analysis. When I worked on the national grape and lettuce boycott in the late 60s and early 70s, the farmworker movement was in its prime. Later, UFW activists, who had been fired by Chavez after the "growing instability" Killoran describes, told us the union deteriorated and forgot its mission of organizing farmworkers. Along with Garcia's book, there are numerous other studies of the movement that give the same sad picture. Today, there is a Chavez foundation that mirrors the MLKing Foundation, operated by family members who take in salaries far above the $5 a day most of us earned. On the bright side, former UFW activists are still struggling in California. One organization, the Labor Council for Latin-American Advancement in Sacramento, with Albert Rojas, is involved in the immigration movement and most recently, the Driscoll Berry Boycott by farmworkers in Baja, Mexico. Unfortunately, the UFW is in the news now for failing to pay its organizers, who successfully sued the union for wages. Si se puede indeed!