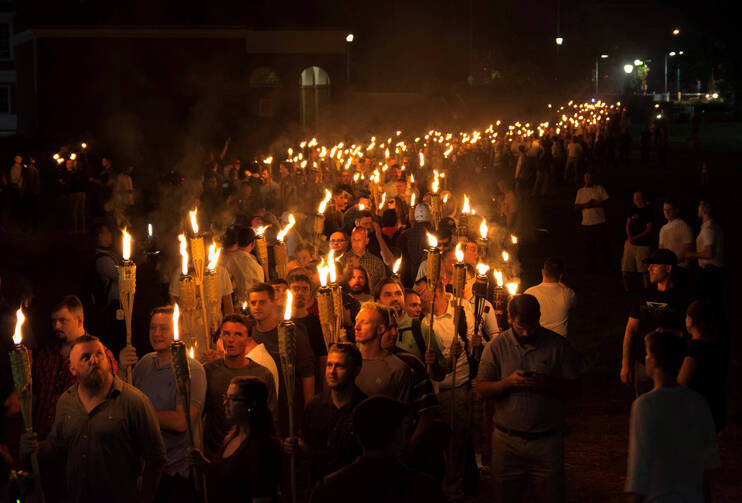 White nationalists carry torches on the grounds of the University of Virginia in Charlottesville, Va., Aug. 11, 2017 over a plan to remove the statue of a Confederate general from a city park. (CNS photo/Alejandro Alvarez)

In 1968, the Black Catholic Clergy Caucus’s inaugural public statement indicted the Catholic church in the United States for being a “white racist institution.” The following year, Vine Deloria Jr., a champion of Native American rights, chronicled the genocidal effects of the “Doctrine of Discovery” on indigenous peoples throughout the Americas. The year after that, theologian James Cone called the white Christian ideology that undergirded U.S. slavery and Jim Crow nothing less than “Antichrist.”

The proposition that Christianity has continuously operated hand-in-glove with white supremacy since even before Spanish, French and English seafarers first washed up on North and South American shores is not itself a new thought. However, it is also true that this suggestion is still guaranteed to offend white (liberal and conservative alike) sensibilities and elicit a cacophony of scoffing, deflection and outright aggression, all drawn from the menu of evergreen cognitive dissonance management tools.

In fact, these latter responses can themselves be seen as symptomatic of the white Christian lens’s monopoly on the mainstream historical narrative in the United States. For this reason, The Sin of White Supremacy, Jeannine Hill Fletcher’s wrenching and meticulous genealogy of the relationship between Christian thought and racism, is guaranteed to shock, depress and enrage more than a few white readers. At the same time, others will read it and think it to be among the most obvious and historically demonstrable theses in world history.

Jeannine Hill Fletcher’s The Sin of White Supremacy is guaranteed to shock, depress and enrage more than a few white readers.

By virtue of its legibility and intellectual rigor, Hill Fletcher’s work is strong meat for inquiring minds who seek to study seriously the American legacy of white supremacy.“As we seek a way forward we must see how Whiteness and Christianness have been twin pillars of the dominant religio-racial project,” Hill Fletcher writes, adding:

Fr. James Martin on Charlottesville: "White supremacy is the opposite of Jesus' message"
America Video

In a cultural environment that has recently seen the emboldening of self-described white supremacists, Hill Fletcher’s work inoculates against the familiar impulse among American liberal elites to locate racism and its corrosive effects squarely within the disenfranchised, “uneducated” white proletariat, the people that Meryl Streep derided as the “football and mixed martial arts” class at last year’s Golden Globes. Hill Fletcher, however, lays bare the endemic white supremacy that is also present in the rarefied air of European and white American scholarly circles and elite-professional life. One of the many hard truths she uncovers is that virtually every white thinker in the intellectual canon in the United States was—among everything else they were—a white supremacist by our contemporary standards. This is how normalized white supremacy has been throughout modern history.

Hill Fletcher lays bare the endemic white supremacy that is also present in the rarefied air of European and white American scholarly circles and elite-professional life.

The rub here that Hill Fletcher points to is that white supremacy is not just the result of “horizontal hostility,” the case of whites in economically precarious positions revolting against proximate melaninated labor competition. This has long been a common logical presupposition in leftist “identity politics” critiques, and was most recently and prominently visible in liberal autopsies of the 2016 presidential election. But far from being a marginal feature that takes root only in the presence of white poverty, as Hill Fletcher demonstrates, white supremacy often remains a central element of Christian intellectual formation in this nation.

Hill Fletcher’s work invites readers to interrogate the deeper implications for conventional optimism regarding the liberatory promise of education, given the incredible resilience of structural racism. The most educatedmen in the history of the world contributed to designing the architecture of white supremacy. If white racism can still be usefully thought of as a form of ignorance, we must contend with the realization that it has merged with our very understanding of what “education” is, and conscripted the keenest minds in the history of white people.

Some readers will notice an affinity between Hill Fletcher’s work and texts like J. Kameron Carter’s Race: A Theological Account (2008). However, Hill Fletcher makes a particular contribution to the genealogy of Christian racism by framing its ideological roots within an exclusivist relationship to other faith communities. A conquesting, Christian supremacist universalism has served as cover for the development of a tiered “sliding scale of humanity,” one that depicts non-Christians as ontologically other while nevertheless maintaining a rosy Christian self-image as the great hope for transcendental unity. The survival of Christian innocence—the notion that American Christianity is fundamentally committed to the equality of all humanity, despite voluminous evidence to the contrary—is the soil out of which white supremacy grew, she contends.

Fr. James Martin on Charlottesville: "White supremacy is the opposite of Jesus' message"
America Video

While Hill Fletcher is unflinching in her critique of Christian theo-racial exceptionalism, she continues to find vibrant resources within the Christian tradition for the promise of white conversion, reparations and reconciliation. Contemplation of the Sacred Heart and the Ignatian Examen couple with contemporary interreligious dialogue praxis to offer proactive methods for the struggle against the enduring legacy of white supremacy. “Love looks like Christ crucified—tortured and hanging from a cross,” she writes, adding: “But the witness of Christ crucified is also affirmation of the tragedy of the cross as the negative measure of where human love has failed. The failure to love is the indictment of the cross.”

The humble, receptive posture of contemporary comparative theology models Hill Fletcher’s vision for early steps toward racial justice. However, this is predicated on the scrupulous contrition of white Christians; part of what that contrition requires is a willingness to accept the fact that white Christians are not, in fact, the heroes of this story. The figure of the Black Christ raised up on the cross of white supremacy is a legacy that belies both Christian optimism and moral exceptionalism. White Christians have been the crucifiers, not the crucified.

Hill Fletcher finds cause for hope in a “theology of intimacy,” one which can re-form an anti-racist Christian community of love, not just on the level of abstract sentimentality, but actualized through material restitution and political agency. She meticulously enumerates the systematic oppression of indigenous, black and of-color communities as concrete expressions of white supremacist ideology, and notes that white Christians’ self-examination, conversion and repentance are necessary but not sufficient, so long as they remain uncoupled from concrete structural action. And yet, in this nation that so prides itself on dreaming the impossible into reality, the mere mention of “reparations” is more likely to be met with nervous sputtering about pragmatic impossibilities than with serious deliberation. White Catholic institutions are beginning to reckon with their internal traditions of racism, but justice will remain an ever-receding horizon without a full accounting of, and divestment from, their spoils of white supremacy.

This article also appeared in print, under the headline “A History of Evil ,” in the March 19, 2018, issue. 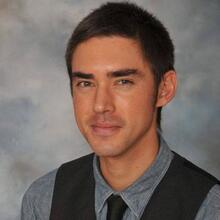 Jack Downey, an assistant professor of religion and theology at La Salle University in Philadelphia, Pa., is the author of The Bread of the Strong: Lacouturisme and the Folly of the Cross, 1910-1985.