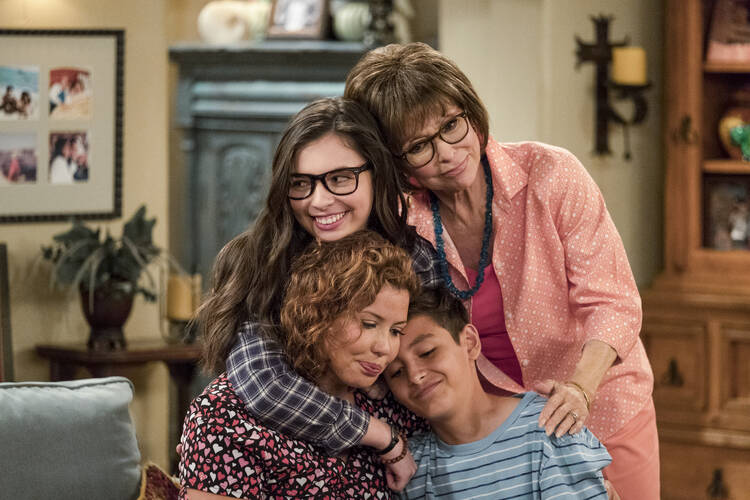 “My parents came over from Cuba in 1962 during Operation Pedro Pan,” Gloria Calderón Kellett tells me. It is the Thursday before the Season 2 premiere of her Netflix series, “One Day at a Time.” The show, which follows a Cuban-American family in Los Angeles, was inspired by Ms. Calderón’s own life. “My parents and a bunch of other Cubans were sent to Portland, Oregon, where the Catholic communities there supported them and helped them get on their feet.”

In the United States, Ms. Calderón’s family rebuilt their lives, first in Portland and later in California, where she attended Loyola Marymount University. After completing her master’s degree in theater from the University of London, she came back to the United States and worked as an assistant to the writer and director Cameron Crowe until deciding to work in television. For years, she worked her way up from staff writer, eventually writing and producing for shows like “How I Met Your Mother,” “Devious Maids” and “iZombie.”

“I loved the shows I saw growing up, ‘Family Ties’ and ‘Growing Pains’ and ‘The Cosby Show,’” she says. “None of those were about a Latino family, but I could see myself in those families.” Eventually, she decided that it was time to write about her own Cuban family.

She received a call from Norman Lear, who produced the original 1970s series that Ms. Calderón’s Netflix show is loosely based on. After meeting with Lear, she felt she could trust him to tell her family’s story. “I love my family, and they’re very precious to me,” she says. “The things that [Lear] talks about and cares about are things that I care about, and he had a real interest and a real curiosity that made me feel safe.”

The show seamlessly transitions between witty one-liners—like Lydia referring to a tissue as a “Latinx”—and serious, topical issues like gun control and immigration.

Ms. Calderón joined Lear along with Mike Royce, who worked on “Everybody Loves Raymond” and “Men of a Certain Age,” to bring the series to Netflix. In 2017, Season 1 of “One Day at a Time” was released.

The show brings audiences into the life of a single, Cuban-American mother, Penelope Alvarez (Justina Machado), living with her family in Los Angeles. Penelope, a former Army medic dealing with post-traumatic stress disorder, is raising her daughter Elena (Isabella Gómez) and her son Alex (Marcel Ruiz) with help from her mother Lydia (Rita Moreno).

In the first season, we see Penelope acknowledge her P.T.S.D., begin therapy and get a divorce. Elena comes out as gay to her family, and Lydia struggles to keep her family in the church. In Season 2, we watch as Alex struggles with what it means to be a person of color in the United States after being told to “go back to Mexico” on a school trip, Lydia becomes an American citizen, and Penelope begins a romantic relationship. The show seamlessly transitions between witty one-liners—like Lydia referring to a tissue as a “Latinx”—and serious, topical issues like gun control and immigration.

Ms. Calderón credits her diverse writing room for the show’s success. “It’s what we talk about in the room. I think everything is laced with comedy and tragedy,” she says. “We’re comedy writers, so we’re also trying to entertain one another in the room. It all comes from real conversations that we have.”

One of the most refreshing parts of the show is its treatment of Catholicism. The Alvarez household is full of religious imagery, from crosses on the wall to pictures of John Paul II and explicit references to Pope Francis.

In one of the most touching scenes in Season 1, in the episode “Pride & Prejudice,” Lydia admits to Penelope that she is not comfortable with Elena’s sexuality because it goes against church teaching. “Although God did make us in his image. And God doesn’t make mistakes,” she says. “And when it comes to the gays, the pope did say, ‘Who am I to judge?’ And the pope represents God. So, what, am I going to go against the pope and God? Who the hell do I think I am?”

Much of the show’s treatment of Catholicism is due to Ms. Calderón’s own upbringing. She grew up in a devout Catholic family with positive examples of faith and leadership both within and outside the church. She also credits her education at Loyola Marymount.

For many Latinos, the family they see in “One Day at a Time” is the first time they see their culture on television.

“Jesuits were so great about having real conversations about faith,” she says. “People feel nervous about questioning faith. The Jesuits were like, ‘Let’s talk about it.’” The Jesuits she encountered encouraged her to ask questions and to constantly dig deeper into her beliefs, which, she says, “made me feel good as opposed to making me feel bad and guilty.”

Another important theme “One Day at a Time” focuses on is mental health. Issues like depression, P.T.S.D. and generalized anxiety disorder are common within the Latino community, yet, according to surveys, less than 15 percent of Latinos in the United States will speak with a mental health specialist.

Growing up, mental health was not something that was openly discussed in Ms. Calderón’s family.

“There [are] definitely mental health issues in my family, but there’s stuff that I think is undiagnosed that people would be unwilling to talk about,” she says. “It would be like, ‘That’s kind of your loopy aunt, or that’s your loopy cousin.’”

For many Latino families coming to the United States, Ms. Calderón believes, mental health issues are often seen as struggles everyone goes through in life, or, if they are acknowledged, they are not prioritized.

“When you’re an immigrant and you’re coming in and you’re fighting so many things, you’re worried about feeding your family and paying your bills,” she says. “You don’t have the luxury of also worrying about your mental health.”

Highlighting Penelope’s post-traumatic stress disorder on the series, she tells me, was an opportunity to focus on an issue that is still heavily stigmatized in Latino communities, adding that it is a chance to “start a conversation within Latino families and within the community about how we can better support one another.”

As Hollywood undergoes a cultural shift, from the #MeToo movement to calls for more diverse and inclusive roles, Justina Machado and Rita Moreno are powerful examples to watch on screen. “Rita was the first time I saw myself represented on TV. ‘West Side Story’ was playing,” she tells me. “‘She looked like my mom to me, which blew my mind.... In many ways, I am here because of Rita.”

Ms. Calderón hopes that she can continue to change the industry for future female and Latino showrunners. Indeed, for many Latinos, the family they see in “One Day at a Time” is the first time they see their culture on television.

“I feel like we get to set the record straight a little bit, even though we’re just a little TV show,” Ms. Calderón tells me. “When we do events, people come up to us afterwards and thank us so much... This one woman said, ‘I didn’t realize that I needed to see a can of Goya and a cafetera until I saw it—it made me cry. I was so confused. Why am I crying? It’s just a cafetera. But I’d never seen it before onscreen.’”

As, you mentioned that One Day at a Time focuses on mental disorders like depression, anxiety, P.S.T.D, etc. There are people like psychic like Voyance Pure( http://www.martine-voyance.com/qui-suis-je ), tarot card readers, counsellors;who can help a person suffering from these problems come out of it. There are other ways to available on the internet that can help a person come out of their problems.