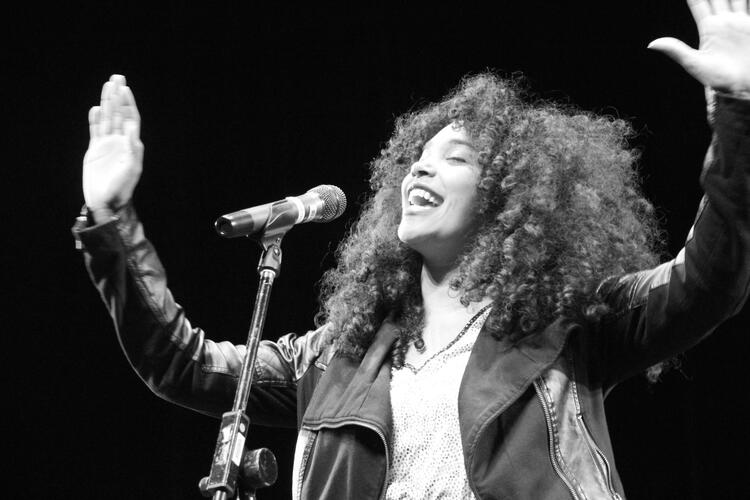 Ms. Acevedo was performing at the Word Up Community Bookstore in the Washington Heights neighborhood of New York City in October 2016. Her collection of poetry, Beastgirl & Other Origin Myths, had just been published. Surrounded by books and an audience of about 30 people, she performed her spoken word, seamlessly switching between English and Spanish.

Beastgirl is centered on the experiences of first-generation American women. Written over several years, it is what Ms. Acevedo describes as “contemplations on Caribbean womanhood,” exploring themes like Dominican folklore (such as the mythological Ciguapa), family, the dictatorship of Rafael Trujillo and sexuality. Born in New York City to Dominican immigrants, the poet writes about experiences that often mirror her own.

Beastgirl is what Ms. Acevedo describes as “contemplations on Caribbean womanhood,” exploring themes like Dominican folklore and sexuality.

Ms. Acevedo describes learning as early as the first grade about the tensions that exist in the ways Latinos identify in the United States. “You feel so Dominican at home, and you don’t ever question that,” she told me when we spoke last fall. “Then you go to school and you start realizing that there are certain values, certain ideas that you have that people may not share with you, and you start seeing these values, ideas fall across cultural lines.”

Coming from a family of storytellers, Ms. Acevedo has always seen poetry and writing as a means to talk about the world she knows.

“When I was 12, I really started using hip-hop as a medium to talk about my neighborhood, to talk about the things that were happening in current events that I was reading about,” she said.

Slam poetry, the style of poetry Ms. Acevedo is known for, is a genre in which poets recite original poetry, combining elements of theater, storytelling and other kinds of performance. Like hip-hop artists, slam poets focus on issues like racism, sex, poverty and identity. Ms. Acevedo’s influences growing up ranged from Latina writers like Sandra Cisneros and Julia Alvarez to rappers like Eve, Foxy Brown and Jay-Z. “I remember my first official rap verse I wrote when I was 12 years old,” she told me. “I started realizing that not only could I write about it, recite it, but now there was a conversation being opened because of my ability to turn what I thought into art.”

Some of the poet’s most popular spoken-word performances include “Hair,” on the complicated relationship Dominican women have with their hair; “Bittersweet Love Poem,” an ode to her partner; and “Beloved or If You Are Murdered Tomorrow,” on the murder of black men by police officers.

Less than two years after the publication of Beastgirl, Ms. Acevedo will be releasing her debut novel, The Poet X, this March. The seed for the book was planted while Ms. Acevedo was an eighth-grade teacher in Maryland, where her students, who were predominantly Latino, would ask why none of the characters in the books they were required to read looked like them.

“I went out and tried to find these books at first, but then realized that there just still aren’t enough,” she said.

She decided to write the story of Xiomara Batista, an Afro-Latina teenager growing up in Harlem, who is struggling between her own desires—wanting to be a slam poet—and those of her mother, who wants her to follow the teachings of the Catholic Church.

Ms. Acevedo grew up in a devout Catholic household. “I went to church every Sunday with my mom. And I have had every sacrament up to confirmation. And I think my relationship is still developing with religion,” she told me. “I don’t know that I would call myself necessarily Catholic anymore. I think I have a relationship with God, and I’m still exploring what that looks like.”

In The Poet X, Ms. Acevedo captures the complicated relationship many Dominicans have with Catholicism, particularly focusing on the ways in which faith can affect women.

“There is a lot that is taught through the church that can be empowering, and also a lot that can really make someone, especially girls, question themselves,” she said. “It was important for me to have Xiomara realize that her voice can push against the varying structures that are trying to tell her that she has to be one kind of girl.”

Slam poetry, the style of poetry Ms. Acevedo is known for, is a genre in which poets recite original poetry, combining elements of theater, storytelling and other kinds of performance.

We see this dynamic within Xiomara, who hides her relationship with her classmate, Aman, from her family, while still questioning what she has been taught about temptation. In one of the chapters of the novel, “Wants,” Ms. Acevedo describes the attraction Xiomara is beginning to feel for him, writing, “As much as boys and men/ have told me all of the things/ they would like to do to my body,/ this is the first time I’ve actually wanted/ some of those things done.” Ms. Acevedo wants Xiomara to be a character who challenges how society, especially Latino culture, talks about sex.

In light of the conversations sparked by the #MeToo movement, the theme of sexuality in The Poet X feels especially timely. “I think young people are taught to be afraid of their bodies,” Ms. Acevedo told me. She believes that for a culture that glorifies sex, we do not know how to teach young people about it.

Like other Dominican writers such as Ms. Alvarez and Junot Díaz, Ms. Acevedo presents perspectives not often represented in literature that refute many of the stereotypes associated with Dominican-Americans. Telling these authentic Latino stories is paramount, Ms. Acevedo believes. “I believe in storytelling,” she said. “If we sit with what hurts us by ourselves, we think we are alone in our pain. It’s important to tell these stories, to hear these stories, to see these stories as a realization that we’re not alone.”

An engaging essay about an emerging poet and writer. I'd be interested to learn more about how this book might be taught in a college course.

It is interesting to read this article as a woman called to priesthood in her teens and having dealt with the crippling rejection of her church and its teachings to women that are simply put, all about how women should hate themselves if they are drawn to anything other than motherhood or the convent.

Like with these young women, women in my generation, put on a smile and hid the pain as best they could but now I hear so many of my Catholic sisters say, I am staying in our church but I am not expecting my daughter to stay and I am not sure I want her to either, or my son either. Too much agony and not enough ecstasy here. They tell me that they can't see inviting women who are friends to join Catholicism either. We need to fix what is broken first. Catholicism is not a very healthy place for the female soul right now and no ones really listening either. Our leaders are just doing a lot of pretending to listen. We talk about women deacons but not priesthood for women even though we know that there are not that many women expressing a calling to the permanent deaconate but there are many called to priesthood. We talk about roles but roles for women is slang for holes, little cages of lesserness we won't restrict men to.

God has pressed on me this past year more than any other that the quest for same ordination for men and women is about creating a Just Church, for all, rather than just a purpose to increase women. Until we are Righteous aka Just in the ways that are obvious to those who enter our churches for the first time, they have little reason to return. This world needs Jesus Christ desperately but won't believe him to be truly present in a Church that espouses misogynistic and biased ordination practices.