The Catholic punk rock of The Hold Steady’s Craig Finn 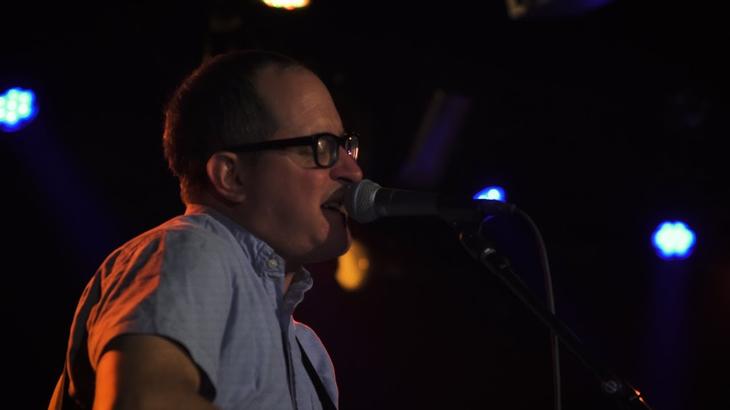 “It’s been a terrible week,” Craig Finn told the crowd at a Greenwich Village club a few days after a white nationalist rally in Charlottesville, Va., left three people dead and several injured. He was there to take part in a discussion about spirituality and music, but the events of the previous weekend were never far from people’s minds. “I don’t know what I can do,” he said. “I think to feel helpless is to be alive, right?” To anyone familiar with Finn’s work—whether as a solo artist or as the frontman for the beloved indie-rock group The Hold Steady—that sounds about right.

In his songs, people desperately seek transcendence but usually end up settling for some form of escape or oblivion.

Finn’s songs are populated by broken characters that careen through life in varying stages of helplessness and aliveness. He has carved out a unique niche over the past decade as a songwriter with an impressionistic, Kerouacian-Catholic approach to character and narrative. In his songs, people desperately seek transcendence but usually end up settling for some form of escape or oblivion—leaving listeners to wonder at times if there is a meaningful distinction between the two. Despite the circumstances of his characters, Finn’s songs somehow manage to avoid cheap nihilism in favor of a palpable sense of mercy. His characters may lack jobs, direction or even a regular roof over their heads, but they are rarely without humanity or hope.

The evening was the latest installment in the Friday Night Jam—a series with a mission to host spiritual meditations and conversations on music, which has featured artists like Matisyahu, Lisa Loeb and Lenny Kaye of Patti Smith Group. Created by Mike Greenhaus, the editor in chief of the music magazine Relix, and Rabbi Dan Ain, the founder of Because Jewish, the series had previously focused on Jewish artists. But they asked me to participate in (and America to co-sponsor) the event that night because Finn is Catholic.

I discovered quickly just how deeply that fact resonated with people. “Separation Sunday is a great Catholic rock and roll album. Possibly the greatest,” one fan commented on Facebook moments after the event was promoted on social media.

The 2005 Hold Steady album to which the commenter was referring has taken on near mythic status among certain fans for being, as Finn put it, “a deep dive into Catholicism.” The album is a song cycle about a runaway/addict/sometime prostitute and erstwhile Catholic named Holly (short for Halleluiah) as she travels to parties around the Midwest with a pimp named Charlemagne and a skinhead named Gideon. Their Midwestern odyssey comes to a conclusion with the album’s final song, “How A Resurrection Really Feels”:

The priest just kinda laughed
The deacon caught a draft
She crashed into the Easter Mass
With her hair done up in broken glass
She was limping left on broken heels
When she said, “Father, can I tell your congregation how a resurrection really feels?”

“I was thinking about the prodigal son, which is still to me the most beautiful and interesting Bible story,” Finn says. “That song is about somebody coming back in a very dramatic fashion, in ways that I have never done. Busting into Easter Mass and saying I’m sorry I’ve been away, but I’m here now. Can you take me back?”

Craig Finn: “Punk rock was my religion early on.”

Growing up Catholic in Minneapolis, Finn saw church as more of an obligation than a free choice. It was in middle school that he had a conversion of sorts when listening to the album “Hootenanny,” by the legendary Minneapolis rock group The Replacements. “Honestly it was like a religious experience,” he says. “By the third song, ‘Color Me Impressed,’ I knew I had a new favorite band, but I also knew that things had maybe changed more so than that. That maybe my life had changed.” Decades later he recalls that it was like the truth being delivered from on high: “Punk rock was my religion early on.”

Though he stopped going to Mass when he left home for college at 18, the Jesuits he encountered at Boston College helped him connect to faith philosophically and intellectually.

It was not until his early 30s that his connection to faith began to change. He was married at the time, and his now ex-wife started to have some problems. “I was sort of grasping at straws,” he says. It was around the time when The Hold Steady was starting that Finn began to go back to church. “That’s kind of where the two rivers connected. The love of punk rock and the longing for something bigger. Something to explain some of the hard times I was going through in the comfort of faith,” he says.

His third solo album, “We All Want the Same Things,” released this past spring, finds Finn continuing to mine “big picture things.” In songs like “God in Chicago” and “Preludes,” we are introduced to new characters that are lost, down and out but still somehow slouching toward Bethlehem. For Finn, it is as if the subject matter seems to have chosen him rather than the other way around. “That to me is still the most beautiful thing; this forgiveness that I continue to explore,” he says. “In a lot of songs I’ve written, the concepts of forgiveness and redemption just keep coming back.”

Provocative article. Yes, to continuing the struggle for faith and forgiveness of self and others In a turbulent world..