Arcade Fire looks for God in a material world. 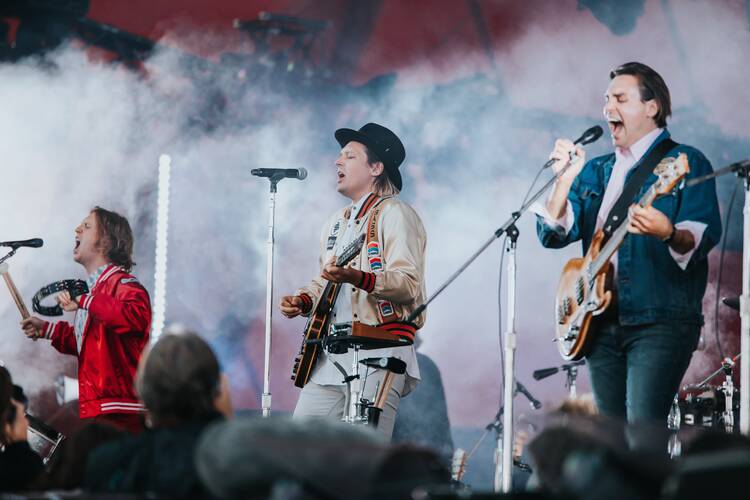 In his 1982 hit “The Coffee Cola Song,” the late Cameroonian artist Francis Bebey takes a dire view of wealth and those who possess it: “There are people in town, weird people in town,” he croons over a deceptively perky Afro-pop arrangement, “eating bread and butter and honey, and drinking black coffee cola. Money is what they like most…. But if you could go and see how they live…. Then, you discover how savage they are.” They are brutal and corrupt, these moneyed folk, in Bebey’s eyes, their wealth built on “war, hate and crime.”

A sample of that song’s kooky panpipe-and-vocal riff features prominently in the title track from Québécois band Arcade Fire’s latest album, “Everything Now.” Bebey’s words aren’t heard, nor is the band’s message quite as direct, but there is a similar viciousness in its critique of consumer culture and the soullessness that can attend a life cluttered with stuff. “Every room in my house is filled with shit I couldn’t live without,” frontman Win Butler sings. Meanwhile, “Every inch of space in my heart is filled with something I’ll never start.”

This theme, of a tension between materialism and a yearning for greater meaning or purpose, runs throughout the album. It is both self-aware and satirical. The lyric book is laid out as a retro store catalogue, the words stylized as ads for cereal, clothes and gadgets. The album begins and ends with variations on the title track (each titled “Everything Now (Continued)”); listen on repeat and it loops back seamlessly, an endless repetition. This, too, is a product after all: commodified art, a part of the consumer culture it is lampooning.

A tension between materialism and a yearning for greater meaning runs throughout the band's new album.

Arcade Fire has always been a Serious Band. On “Everything Now,” the seriousness is tempered by a lighter touch. As producers, Thomas Bangalter of Daft Punk and Pulp bassist Steve Mackey guide the band through a range of retro pop and dance styles. “Chemistry,” a menacing tale of unrequited attraction, is delivered with a horns-driven swagger. “Peter Pan” is busy with bitsy synth as it explores the near-thwarting of human connection in the modern world: “Born so close but we grow apart, and all the sickness starts in the heart.”

Elsewhere, “Infinite Content” is a slight but on-point comment on the glut of information and entertainment in the digital age: “We’re infinitely content…. All your money is already spent, on infinite content.” Oddly, the song is performed twice, once in punk rock style and then as a languorous country ditty. Perhaps this too is a comment on music as product—the identical content repackaged and resold to a different audience, or the art rock equivalent of “two for the price of one”—making it a joke within a joke. But it feels a little too clever to resonate.

The album’s strongest tracks stick closer to the Arcade Fire blueprint (albeit embellished by Bangalter and Mackey)—expansive, epic, elegiac. Aside from the title track, there is also “Creature Comfort,” an emphatic and empathetic anthem for young people struggling for survival in an image-obsessed world; they “starve themselves…and wait for the feedback,” or lie in bathtubs contemplating suicide. “God, make me famous,” cry Butler and co-vocalist Régine Chassagne. “If you can’t, just make it painless.”

Arcade Fire has always been a Serious Band. On “Everything Now,” the seriousness is tempered by a lighter touch.

In the lives and worlds painted here, God is present, but the relationship with him is vexed. In the chunky ’80s pop-inspired “Signs of Life,” Butler declares: “Love is hard, sex is easy. God in heaven, could you please me”—a sardonic evocation of a life lived for self-gratification, where God is viewed as a vendor doling out small pleasures. Conversely, the protagonist in the slow-funk “Good God Damn” is on the verge of suicide before being arrested by the graceful notion, perhaps for the first time, that “Maybe there’s a good God—damn.”

What theologians and environmentalists can learn from Sufjan Stevens
Christine E. McCarthy

These ruminations lead eventually to the epic, slow-burning ballad “We Don’t Deserve Love.” Adorned by atonal synths and sparse piano plinks, the lyric describes a pair of estranged lovers trying and failing to reconnect. The imagery suggests this is about more than human romance, evoking a God longing for reunion with those who have turned away (distracted, presumably, by all the stuff that fills up their lives): “Keep you waiting hour after hour, every night in your lonely tower, looking down at all the wreckage.…”Amid the excesses enunciated throughout the album, the possibility of finding solace in being loved by God persists, though it seems at times frustratingly out of reach: “Mary, roll away the stone. The men that you love always leave you alone.” Tellingly, “We Don’t Deserve Love” suggests authentic human connection is one of the places in which God’s love can be located (“If you don’t deserve love, and if I don’t deserve love, could we deserve?”). Accumulated wealth or possessions can’t replace that. Sings Butler: “Stop pretending you’ve got everything now.” 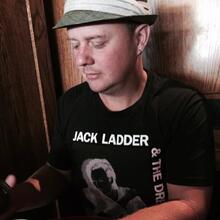 Tim Kroenert is the editor of the Australian politics and culture journal Eureka Street.

Quebecois band?! That's a bit of a stretch.