State of Shakespeare: The Bard’s many incarnations 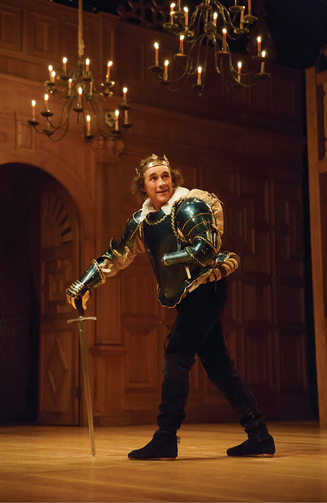 New York found itself awash in Shakespeare this season, and the best of it, it is only fair to report, has traversed the Atlantic from the playwright’s homeland: a shuddering, immersive “Julius Caesar” set in a women’s prison, imported from London’s Donmar Warehouse to St. Ann’ s Warehouse in Brooklyn in late October, and a pair of Broadway hits still running in repertory, “Richard III” and “Twelfth Night,” that come to us from Shakespeare’s Globe, also in London. All three appear to illustrate the facility for verse that seems inbred in the British—though I would argue that this national advantage is largely a myth, and that what makes these shows work above all is their ensemble ethic and inspired directorial concepts.

But more on those anon. Also worth noting are the more middling American-born efforts of this unofficial Shakespeare season. There was a Broadway “Romeo and Juliet” most notable for starring a single Brit, Orlando Bloom, as Romeo, amid a diverse American cast that, by most accounts, was not shown to best advantage (I sat this one out, I must confess). More creditable is Julie Taymor’s ravishing, if lopsided “A Midsummer Night’s Dream,” which christens the brand-sparkling-new Brooklyn home of a longtime New York-based classics company, Theatre for a New Audience. Last and certainly least is a muddled, misbegotten “Macbeth” at Lincoln Center, with the easygoing Ethan Hawke stranded and straining in a stark, silly staging.

By popular reputation, New York has something of a Shakespeare deficit; apart from the offerings each summer by the Public Theater’s Shakespeare in the Park, which have held to a high and playful standard in the past few years, and the aforementioned T.F.A.N.A., Gotham largely gets its Bard from abroad. To see world-class North American Shakespeare, you’d do better to head north, to Stratford, Ontario, or way west, to the Shakespeare Festival in Ashland, Ore.—both places, among others in the United States, where neither the cohesion of the acting company nor the verse speaking are given short shrift. Economics are partly to blame here: The large casts and long running times required for Shakespeare are anathema to commercial producers and nonprofit theaters alike. The city’s East Coast berth, so convenient for regular incursions by top-flight British troupes, may be another reason for our slight Shakespearean inferiority complex.

Of course, the greatest distance this Elizabethan canon has traveled is not the journey across the Atlantic but its passage through the oceans of time—from a rowdy, robust theater tradition embattled by Puritans to a more fragile, rarefied theater culture now threatened, or so it would seem, by the attention-span-narrowing charms of populist entertainment. What the best current Shakespeare productions show, though, is that these old plays have nothing to prove; they survive handily because they’re not in competition with our popular culture—they’re more like the wellspring of it, the ur-text of every police procedural, political thriller, domestic tragedy, rom-com and mistaken-identity farce we now consume on-demand on whatever screen is near at hand.

Not that these texts are easy or self-evident. They remain contemporary only insofar as contemporary actors, directors and designers find ways to speak through them, to make them their own (and in turn ours, as well). The Donmar Warehouse “Julius Caesar” did so with a vengeance, and was rife with what may sound like gimmicks: 14 female actors entered the prison space as detainees and guards, then played all the roles as well as some loud onstage rock instruments.

Indeed, some of the innovations by the director, Phyllida Lloyd, skirted the edge of excess, and the women-in-prison notion didn’t bear close scrutiny. But somehow the athletic severity of the frame only made the picture inside it that much sharper and brighter. I have never seen or heard Shakespeare’s anguished tragedy about the alternating temptations of power and principle more clearly or searingly, or felt actual suspense about an outcome foreordained by history.

On their surface, the Globe productions on Broadway could not be more different from this pungent “Caesar” salad. Both “Richard III” and “Twelfth Night” are performed and staged in a meticulous recreation of Elizabethan stage practice, right down to the starched ruffs, tooting recorders and all-male cast; audience members who arrive 20 minutes before curtain can watch the actors get into their authentic costumes and makeup on the stage of the Belasco Theatre. But in following to the hilt a trend so diametrically opposite from contemporary interpretations like Donmar’s, these original-practices stagings end up making a similar point about the plays: that strong, unfamiliar concepts can make them shine in a new light.

This is most true of “Twelfth Night,” played here with a revelatory luxuriance and musicality; not a moment of comedy or pathos seems forced, which naturally allows them to gather all the more force, until the plot’s absurdities finally boil over into both riots of laughter and a heartening swell of melancholy. The production’s utter trust in the play—which is another way to say its trust in the audience—is enormously flattering to both.

This confidence wavers a bit with “Richard III,” admittedly a thornier play but here rendered somewhat toothless. I would lay some of the blame at the feet of Mark Rylance, the sneaky acting powerhouse who improbably turns the lust-addled widow Olivia in “Twelfth Night” into another of his inimitable star turns. He plays the scheming Richard as a pathetic, preoccupied clown, a diverting but ultimately defusing choice.

There’s no lack of confidence in Julie Taymor’s sumptuous, if bloated “Midsummer.” Largely redeeming herself after the high-profile train wreck of the Spider-Man musical, she has conceived this romp as a literal dream, heavy on suspended bodies, billowing sheets of fabric and plays of shadows, light and projected images that constitute a visual language all Taymor’s own. You are unlikely to see the play’s forest fairy world rendered more beautifully, from a jet-black Oberon festooned with sharp gold quills to a glowing, diaphanous Titania; from a Puck who’s like an Edwardian marionette with a rasping, ageless voice—a sort of crone/imp—to a seemingly endless chorus of small children who at one point inexplicably march through the theater blowing on didgeridoos. But there’s a lot more to “Midsummer” than fairyland, and the rest of the play—the young lovers who tangle in the woods, the theatrical efforts of a troupe of clueless working men—does not seem to have engaged Taymor’s full attention; her boredom, alas, is contagious.

It’s hard to stay bored for long at the new “Macbeth,” but not for the right reasons. This witch-heavy, would-be scary mess manages precisely two relatively effective scenes in which its stage gadgetry and monochrome design pay off: The banquet at which Banquo’s ghost haunts Macbeth has a convincingly antic pitch, and Macbeth’s cauldron-side consultation with the prophesying witches has a well-wrought bad-trip swirl as he takes a puff from their long pipe and shares their unsettling visions.

Almost nothing else in this overproduced yet undernourished rendition comes off well, least of all the two leads. Anne-Marie Duff’s icy Lady Macbeth generates few sparks of electricity, positive or negative, off of Ethan Hawke’s listless Macbeth. It’s not the verse that stumps Hawke so much as the bloody-minded intention behind it; he can be a fine actor in the right material, but his quintessential pose is the slouch, not the crouch. His lumbering battle scenes here are among the more ludicrous in memory.

In this fall’s battle of the Bards, then, the Brits may have the unmistakable edge. But these plays transcend national boundaries as surely as they’ve lived past their own age, and doubtless old Will will be contested again ere long.

@RobKendt
Show Comments (
2
)
Comments are automatically closed two weeks after an article's initial publication. See our comments policy for more.
Wayne Myers
7 years 4 months ago
I would not call Shakespeare's Globe's staging of "Twelfth Night" an "inspired directorial concept." Rather, it deals a devastating blow to the understanding of the play as a strange and intensely erotic masterwork--the gateway play to Shakespeare's sexually darkest works. The gimmick in this production is its all-men cast. But Shakespeare productions in the Elizabethan Age were all-male, not all-men. Young boys would have played the parts of Viola and Olivia. What the Rylance production has really done is to distort this to turn the play into what it is not--a farce comedy, thereby warping the perspective of the play for a new generation of theatergoers who will now think this is "Twelfth Night." Many theater companies have staged gimmick-filled, self-serving "Twelfth Nights," but for the Globe to have recklessly done so is unforgivable. -- Wayne Myers, author of "The Book of Twelfth Night, or What You Will: Musings on Shakespeare's Most Wonderful (and Erotic) Play."
John Hudson
7 years 3 months ago
It is sad that this production paid absolutely no attention to the religious meanings of Twelfth Night. For instance as Paul Dean notes in his article “’Nothing that is so is so’: Twelfth Night and Transubstantiation” (2003) “important aspects of the play’s meaning depend upon recognition of allusions to Eucharistic theology specifically the doctrine of transubstantiation”. Dean also describes in his article ‘The Harrowing of Malvolio’ (1997-8), how the clown attempts the Harrowing of Hell. My own research shows how the encounter between Cesario and 'Madonna' is a parody of the Annunciation. It is disappointing that a review in this magazine would ignore the religious dimensions of the play. John Hudson (Director, Dark Lady Players NYC and author of Shakespeare's Dark Lady, Amberley Publishing March 2014).