What can one black man's outreach to the Ku Klux Klan teach us about healing?

What can one black man's outreach to the Ku Klux Klan teach us about healing? 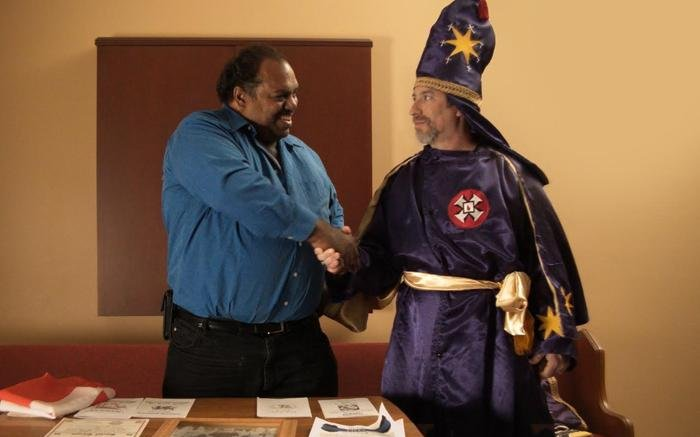 “How can you hate me when you don’t know me?” asks Daryl Davis in Accidental Courtesy: Daryl Davis, Race & America,” now on Netflix. Davis is a 59-year-old black man—married to a white woman—who regularly meets with Ku Klux Klan leaders around the country for one-on-one dialogues on race and prejudice. In the decades he's been doing it, Davis has even developed close friendships with numerous Klansmen, some of whom have disavowed the K.K.K. and surrendered their robes to him. It is a provocative question that might seem like a rhetorical device coming from any other speaker, but for Davis—who has relentlessly sought an answer for over 30 years—it is both a statement of his life’s mission and a sincere plea to comprehend viewpoints many may find incomprehensible.

“How can you hate me when you don’t know me?”

“Accidental Courtesy” chronicles Davis’s fascination with the K.K.K., from the 1980s through his current work with the Klan, American Nazis and other white supremacists and separatists. It is a strange, compelling and, at times, unsettling documentary that has to be seen to be believed. Davis’s approach on race relations is unorthodox and not without its detractors. (His sitdown with Baltimore’s Black Lives Matter activists is tense and unsuccessful). But given our current political and cultural climate, his unconventional methods are a reminder of the potentially transformative power of being in relationship—or, at the very least, conversation—with those we perceive as enemies.

A musician by trade, Davis has befriended and played piano for some of rock and roll’s early icons, like Jerry Lee Lewis and Bo Diddley. But it is Chuck Berry—whom he played with on and off for many years—whom he singles out not only as an artist but as a bridge builder between races. “To me...his music did as much for civil rights as others did by protests and marches,” Davis writes in Klan-destine Relationships: A Black Man's Odyssey in the Ku Klux Klan. “At Berry’s concerts, an atmosphere of tolerance permeated. Blacks and whites danced and intermingled without incident.”

Davis is not an academic or even an activist in any traditional sense of the term, which makes for fascinating viewing as he engages various people throughout the film. Whether it is the Southern Poverty Law Center representative who calls Davis’s work “more of a retail strategy” as opposed to their “wholesale” approach, or Baltimore’s Black Lives Matter activists who see his efforts as a “fetish,” Davis confounds the traditional categories applied to people in the civil rights field.

Many of the warmest encounters in the film involve Klan members he has befriended over the years. It is moving to hear Scott Shepherd, a former Grand Dragon in the Klan who is now an anti-racism activist, discuss the violent, alcoholic household where he grew up in Mississippi and how it led him to look for belonging in the Klan when he was young.

Davis’s meeting with his “good friend” Frank Ancona, an active K.K.K. imperial wizard, is moving for different reasons. After receiving an honorary certificate of friendship from Ancona’s Klan organization, Davis tells him that he hopes to welcome Ancona and his wife and daughter to his home someday. Their meeting takes on an unintentional resonance now that Ancona’s wife and stepson have been indicted for his murder this past February.

To be sure, Davis’s approach requires enormous patience, and his results cannot be measured in terms of political impact or policy. The Black Lives Matter activists he meets are stunned that he has only collected 25 or so robes from members who have left the Klan. Davis, however, is undeterred, noting that “time and exposure” are the great healers, “perhaps the only healers for irrational fear and hatred.”

There is something eccentric and prophetic about Davis. Quirky, cockeyed and occasionally misguided, Davis seems radically committed to the sometimes challenging Ignatian ideal of “meeting people where they are.”

It is an ideal that has been sorely put to the test recently in the United States. “When two enemies are talking, they are not fighting,” Davis said in a recent interview. “They may be yelling and screaming at each other…but at least they're talking. It's when the talking ceases that the ground becomes fertile for violence, so always keep the conversation going.”

This article also appeared in print, under the headline “Radical Reconciliation,” in the May 15, 2017, issue.