Game Show Philosophy: 'Jeopardy!' is a show for our time; 'Wheel of Fortune' is from another 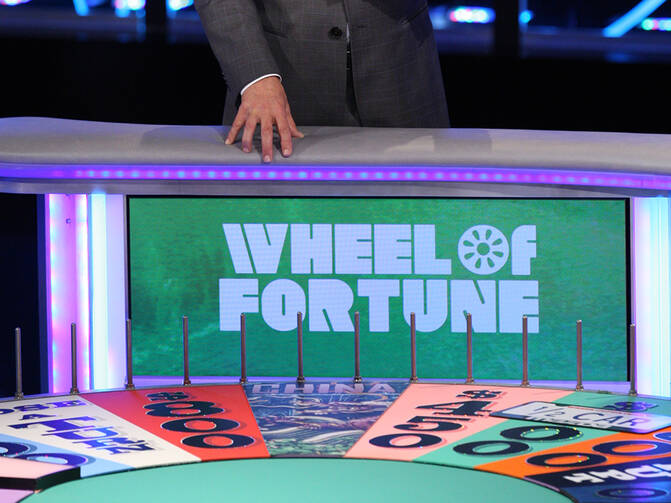 Like millions of other Americans, I am perched in front of what my grandmother called “the last vestige of Western civilization”: “Jeopardy!” With the dapper Alex Trebek as our cicerone, I try to outguess the contestants as we negotiate state capitals, French monarchs and the Book of Exodus. “Jeopardy!” celebrates intelligence, memory, alertness and self-mastery, with luck occasionally making an entry. Fortunes can be won or lost on the Daily Double or Final Jeopardy. But even here, strategic skill is awarded—and applauded. Life here is rational. It is mastered through hard work, study, eagerness and fair play. Awards are commensurate with merit.

I rush to change the channel to avoid the Las Vegasesque screams and set of “Wheel of Fortune.” At least, I used to. What at first seemed to be mindless entertainment seems to me now something more profound. It is a neon-lit reminder that much of what happens to us in life has nothing to do with our virtues or our vices. It simply happens. It is the given. The audience’s yells of “Big money!” have no effect on whether the wheel will land on a vacation in Disneyworld or on Bankrupt. The intellectual acumen of the contestants does little to decide whether you walk away with a Camry or a $99 toaster. Life here is guided by the blindfolded Dame Fortune through a wheel that suddenly turns kings into paupers. Life here is opaque, unreasonable and inscrutable.

“Wheel of Fortune”points to a less rational world where goodness is often ignored and evil often triumphs.

Rather than being a recent outcropping of American pop culture at its most vulgar, “Wheel of Fortune” is arguably our clearest survival of classical civilization. The goddess Fortuna presided over the wheel in Roman mythology, raining down health and illness, wealth and poverty, glory and disgrace in unpredictable turns of fate. There was no discernable pattern to the work of the wheel. Reversals of fortune rained down on the just and unjust alike. Things simply fell out of the hand of the blindfolded goddess. There was no reward or punishment. Events just happened.

The wheel of fortune would not appear to fit well with the Christian faith. Saint Augustine opposed it for the same reason he opposed astrology: it seemed to be a species of determinism, denying divine providence and denying the human agency of free will. But in the sixth century Boethius baptized it. The wheel was now at the service of divine causation, but that causation’s nature and purpose remained obscure. Dante, Chaucer and Shakespeare also planted the arbitrary wheel within the mystery of divine providence. The unpredictable was now an offshoot of a veiled divine wisdom. Medieval scientists routinely located the wheel churning behind the crystalline spheres moving the stars as it spun out the occasional surprise meteor or earthquake. With its theory of random selection, even contemporary Darwinism seems to detect the gyrations of the wheel in its account of biological evolution.

The wheel does not rule out human agency. On the contrary, in freedom we must respond to the unexpected disasters and bonanzas that crash down upon us. This is where the corporal and spiritual works of mercy are born. This is the foyer of justice and charity.

"Frantz" may be the most Christian film you will see this year.
Raymond A. Schroth, S.J.

Most of us would prefer to live in the rational, predictable, merit-based subdivision of “Jeopardy!” But “Wheel of Fortune”points to a less rational world where goodness is often ignored and evil often triumphs. The wheel does not obscure the scandal of the suffering of the innocent and the scandal of the success of the indolent or unjust. It points to what is chaotic and inexplicable as we muddle through a world marked by chance—and, for the Christian, by the traces of an original sin. Even Vanna’s much-mocked silent performance each evening underlines that the wordless work of the wheel admits of no moral explanation. It just is. The world is simply there in its bobbing, weaving change.

Perhaps Pat, Vanna, Las Vegas and the wheel understand something about the unhinging nature of the real we forget at our peril.

Jeopardy, as you say, illustrates the potential of reward earned, so to speak, by hard work, study and eagerness (although I confess that how “fair play” fits that narrative is not particularly obvious to me). The achievement is somehow connected to the result as cause is to effect.

On the other hand, the reward experienced in Wheel of Fortune seems to be the effect of a totally unknown efficient cause, that is to say, of an efficient cause about which we possess not knowledge, but ignorance. But this state of affairs does not prevent us from making totally unsubstantiated assertions about it. We say that “it has nothing to do with our virtues or our vices,” and that “the intellectual acumen of the contestants does little to decide,” but the fact is we don’t know any of these things for a fact; we are, in fact ignorant of these things.

Since the Enlightenment we have become accustomed to using the words “chance” or “randomness” to describe events, the efficient cause of which we know nothing, and various probabilistic theorems have been developed to apply to outcomes of processes that, experiential knowledge has taught us, have been observed with certain comparative frequencies of occurrence. But our condition remains: chance is not causal, but descriptive of the state of our ignorance, and probabilistic descriptions are often ways to pretend that we can quantify the likelihood of an outcome about the efficient cause of which we have not the slightest idea.

Here's my "take." Simplistic? Maybe! Does anything on this earth ever happen by mere chance? I really doubt that, as there are always contributory factors that help determine outcomes. Like in Wheel of Fortune.
The enthusiasm or lack of it with which contestants spin the Wheel, any wheel, dependent on mood, strength, the latter related to food and physical condition, all have parts in what’s going to happen. Destiny? That’s just a word used to try to explain what one does not understand. It’s simply that which happens when this, or that does, or does not happen.

Sound waves rippling throughout the Wheel of Fortune Auditorium can invisibly push the Wheel a smidgen further that may change a fortune into bankruptcy, or the other way around. There are countless “ contributors” to all outcomes, including the push of the Divine Hand resulting in a win, or a loss, a lesser win, a lesser lost, a greater win, a greater loss, however and why ever and for whom ever outcomes happen.

Of course to the best of our ability one must always work for and hope for the best possible outcome, realistically expecting whatever happens nothing more, nothing less. If good accept it, or attempt to make it better, because that which is good is always the better, or best choice. If not so good, examine why and remove negatives as best as one can, finally finding contentment through acceptance that only whatever is, “is.” That which “is not” simply doesn’t exist. That why whatever exists in God-time, already exists in fact! Like resurrection of the dead?

I think this is the best, at least the better way to live, not difficult if one believes in a Provident God, ever at work even in the most mundane, even the most secular, or even “in sin” as St. Augustine says – “For those who love (God) all things work together unto good, even sin,” promoting the ultimate best for all, whether one accepts it or not. So play Wheel of Fortune, Jeopardy, do Lotto, look for goodness, whatever, have fun understanding that one never wins, or loses by mere chance! So it seems to me.