Pope Francis on Netflix: from the slums of Argentina to the halls of the Vatican 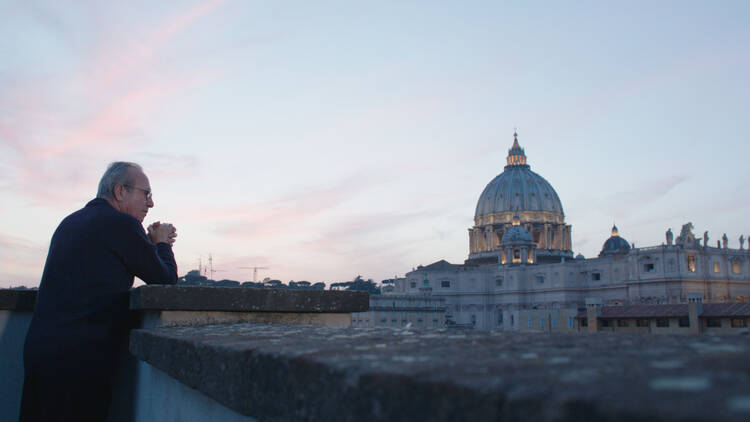 Sergio Hernández in "Call Me Francis"

Released in Italian cinemas in late 2015, “Call Me Francis” could not have predicted the pontiff’s more startling recent statements about marriage and the clergy. But the series, now available on Netflix, obviously has a good sense of the pope’s character and ethos. And where they tend to lead him.

In one key scene, the no-longer-fresh-faced but ever-wiser Jorge Mario Bergoglio (Rodrigo De la Serna) is ministering near Buenos Aires to a slum priest who has fallen in love with a young catechist. Bergoglio doesn’t chastise. He doesn’t judge. He counsels: The people here need you, he says; your work is important. And if you really can’t leave the girl, “there are churches that can accept you as a married priest. The Evangelical Church, for example.” The look on the younger cleric’s face is comically confused.

“Call Me Francis” is unafraid to delve into Francis’ intellectual conflicts. But neither is it afraid to be funny.

“Call Me Francis” is unafraid to delve into Francis’ subtle intellectual conflicts with himself, the anxieties of being a pro-Peronist in the polarized Argentina of the 1960s, the real peril of defying, however clandestinely, the military junta that oppressed his native land from 1976 to 1983. But neither is it afraid to be funny. The scene described above takes a rather light-hearted approach to a serious priestly dilemma; so does a sequence in Buenos Aires earlier in the series during which Bergoglio seeks an alliance with a sympathetic judge (Muriel Santa Ana). They have dinner, he agrees to baptize her baby and only then learns that she is unmarried with three children. You can literally hear him gulp.

The scene with the amorous priest is not just funny but, like much of “Call Me Francis,” also bitingly political. The challenge to Roman Catholicism dominance by Evangelical Protestantism in South America has much to do with the church’s perceived moral rigidity and compliance with the kind of government that Bergoglio valiantly—if pragmatically—resisted as provincial superior of the Society of Jesus during the mid- to late-70s. It is also quite revealing of Francis’ nature as a spiritual shepherd: He does not instruct his subordinate in the course he must follow; he lays out the man’s options in a way that encourages the righteous path. One might say his papacy has taken a similar tack.

If one is inclined to celebrate the four years of this pope by watching the four parts of “Call Me Francis,” rest assured there are worse ways of spending one’s time. If you understand Spanish, great. Otherwise you will find the subtitles less than fully illuminating. The initial episode of the series is something of a slog, at least until the young Bergoglio somehow gets the illustrious Jorge Luis Borges to visit his high school literature class in Santa Fe, Argentina—where, again, pro-and anti-Peronist sentiments clash and the half-blind Borges is insulted by the kind of privileged individual who will later be oppressing his country.

De la Serna—who was Gael García Bernal’s sidekick when the latter played Che Guevara in “The Motorcycle Diaries”—is more of a leading man than the pope probably ever was, but he brings to the role an inner life and intellectual gravity that serve his character well. The romance that the pope has said nearly derailed his early vocation is portrayed here as almost entirely one-sided—the young woman is in love with him, not he with her, and his extrication from what is less than a romance is a little awkward, but mostly gentle. His interrogation by Jesuits when he tries to join the order is an intricate dance of minds, the questions arcane, the answers equally subtle. When he goes to Rome 10 years after his teaching career in Santa Fe, he expects, perhaps, an assignment to Japan. But no, he is told, “You are strong in your doctrine, and flexible with humanity.” He is exactly who they need back in Argentina. (His differences with the order are not part of the story.)

As a de facto politician during the Junta, Bergoglio is unafraid to play hardball, using the imprimatur of the church to extort decency out of thuggish generals who don’t mind torturing innocents if their hereafter is assured by an accommodating church. Yes, the church takes a few beatings itself in “Call Me Francis,” for absolving the sins of oppressors, for complicity with the dictatorship and, even, a decade after the fact, urging “forgiveness” for crimes that were never prosecuted—or, in most cases, acknowledged. It was not anyone’s finest hour, but Bergoglio, it is made clear, acquitted himself with honor, compassion and no small amount of remorse for some very human shortcomings.

The Chilean actor Sergio Hernández plays Francis as an older man (De la Serna is Argentine); his ruminations in Rome, just prior to his election, bookend the chapters and the series. The transition from one actor to the other is one of the more stirring sequences in the film: During a homily about poverty and exclusion delivered to a church full of well-to-do Argentines, there are two priests speaking, two Bergoglios; the initial effect is bewildering, but then one realizes we are watching the physical man change before our eyes, while his principals remain the same. And though older, he will wade back into the crisis in Argentina with vigor when bodies begin turning up and the scandals of the dictatorship resurface.

“Call Me Francis” is occasionally much too talky; the direction by the Italian Daniele Luchetti, despite a few dazzling flourishes, is mostly workmanlike. But the charity and soulfulness of the story are considerable. That it was purchased by Netflix from an Italian production company owned by Silvio Berlusconi might give one pause. But why be small-minded about such a big-hearted story?

Interested in all things Francis, I've added this to my Netflix cue. Will check back here with some comments after I've watched a few episodes. I love watching Francis so much in the flesh and in real time, I hope I'm not disappointed with someone else playing his role in a manufactured setting.

Interested in all things Francis, I've added this to my Netflix cue. Will check back here with some comments after I've watched a few episodes. I love watching Francis so much in the flesh and in real time, I hope I'm not disappointed with someone else playing his role in a manufactured setting.

I watched this movie about a month ago. I recommended it to parishioners in a homily. It is a beautiful and powerful film. The only downside is that many elderly parishioners had trouble reading the small subtitles since the film is in Spanish. I was fortunate that my TV gives me some options on the size and type style for subtitles. In fact, I watch nearly all my Netflix and Amazon shows (I don't have cable anymore) with subtitles because my hearing is getting so bad.

The movie tracks the growth of Pope Francis (Jorgé) in political and social conscience as well as holiness. It is particularly good at showing his development while Provincial Superior of the Jesuit Order in Argentina and the agony of the Dirty War. I felt I understood him much better after watching this movie. I highly recommend it to those who wish to see how he became the Pope he is. It is clear why the people of Argentina love him so much.