The Price of Beer and Redemption in "Manchester by the Sea"

The Price of Beer and Redemption in "Manchester by the Sea" 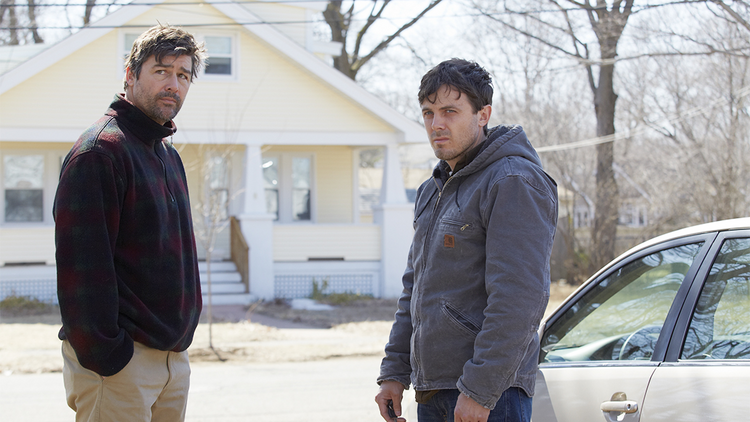 Plenty of movies make you think. Far fewer allow you to think, which is something rather different. Take “Manchester by the Sea,” writer-director Kenneth Lonergan’s heartbreaker starring Casey Affleck: There’s the occasional sense of a breath being taken, of visual caesurae, which—as the story unfolds across its mournfully gray New England landscapes and seascapes—permits one to ruminate about vanishing industry and vanishing fisheries; climate change and societal upheaval; moral transformations and moral turpitude. The price of beer. And, mostly, redemption.

The one in need of redemption is Lee Chandler (Affleck), who is what New Yorkers would call the “super” at a four-building complex in the less-than-fashionable Boston suburb of Quincy, Mass. He is the guy who unplugs the toilets, shovels the seemingly endless snow, takes out the trash. He is a man in slow, painful motion, a fellow with a reputation of incivility toward annoying tenants, who avoids his fellow man (and woman) and who, now and then, drinks himself into a state of belligerence so he can start fistfights at local bars with guys who wear ties.

First, he gets a call: His brother Joe (played by Kyle Chandler in flashbacks) has died. Then he gets a wake-up call: Joe, in his will, has named Lee guardian to his virtually motherless 16-year-old, Patrick (Lucas Hedges). It seems like the introduction to a Silas Marner-style story. But it is a job Lee reflexively turns down.

Why, exactly? Director Lonergan (“You Can Count on Me,” “Margaret”) is such skillful writer (he co-wrote the screenplays to “Analyze This” and “Gangs of New York”) that the viewer is constantly kept on the balls of his or her feet, poised in anticipation of information that arrives just when it should, not a moment before. Lee’s history unfolds with no more velocity than is necessary to create a gnawing, tense anticipation, a craving for revelation. What do we know about him? That he’s a nasty drunk; that he’s spiritually stagnant; that his avoidance of people is pathological. To mention the reasons for all this is a spoiler, I suppose, since the “reveal” arrives about an hour into the film, but it needs to be addressed and if you don’t want to know you ought to look away....

Following a drunken, beer-and-cocaine-fueled party with his buddies a few years earlier, while his wife, Randi (Michelle Williams) slept, Lee started a fire in the fireplace, neglected to replace the screen, went out to buy more beer and returned to a conflagration that was consuming his home and his three children. Upon making his required statement at the local police station, he is surprised—no, appalled—to learn that he can leave, that accidents will happen; there is no law against forgetting the fireplace screen and he will not be subject to gruesome retribution. He wants punishment. He needs it. On his way out of the station, he grabs a cop’s gun and is barely prevented from blowing out his brains.

Lee Chandler has been tried and convicted by his own self, and has been sentenced to—what? A kind of walking death. Lonergan avoids religious context/content—even though Lee’s spiritual disability is the fulcrum of the film—but the character is an misanthropic advertisement for spiritual intervention. It would be a poor drama in which no one develops, or experiences a catharsis, or makes no impact on his fellow characters. Lee certainly does all of the above—not in a manner that meets expectations, but rather in a fashion that is honest and true.

And, to tell the absolute truth, it is thrilling, in the sense of artistic accomplishment and the recognition of the soul’s capacity for roiling emotions and depth of feeling. Casey Affleck is a profoundly gifted actor who seems to do nothing while taking up occupancy in our hearts and minds, and making a character like Lee Chandler an embraceable casualty. The aforementioned scene with the police is horrifying and heartbreaking. It is also one of the hardest kinds of things an actor can undertake, grief being an emotion so easy to mishandle, which is why his scenes later with Williams are so magnificent. You can hardly believe that they attempt to do what they do, much less accomplish it, which is to transport us into their peculiar realm of existence, a place of mourning, self-recrimination and stymied love.

Affleck and Williams are surrounded by similarly gifted people. Lucas Hedges, like his co-star, inhabits a deliberately abrasive character, and plays Patrick as headstrong and sarcastic, a teenage satyr who juggles girlfriends and enlists his uncle as a conspirator in his romantic deceptions. But he’s also a believable human. Likewise Kyle Chandler, who in his limited screen time establishes Joe Chandler as the kind of salt-of-the-earth personality and affectionate father whom everyone loved, and who represents, more painfully, what Lee might have been—or perhaps even was—before calamity struck.

Not quite so human are the characters played by Gretchen Mol and Matthew Broderick. Mol is Elise, Patrick’s mother and Joe’s alcoholic ex-wife, who has been M.I.A. for some time but resurfaces after hearing of Joe’s death; Patrick has been in touch with her by email and when Lee threatens him with relocation to Boston, he starts to imagine a life with his long-absent mother. He has lunch with her and her fiancé, Jeffrey (Broderick), a painfully stilted affair, during which Jeffrey follows Elise to the kitchen, presumably to make sure she’s not hitting the cooking sherry. Later, while debriefing Patrick, Lee asks what Jeffrey was like:

“Catholics are Christian, too,” Lee says, laughing. “You know that right?” It is one of the film’s funnier moments, if not necessarily a joke for everyone.

But Lonergan is not a moviemaker for “everyone.” He is a maker of films for adults, and he harbors the notion that his viewer has an intellect and a memory. Lee, who moves from one place to another over the course of the movie, packs, very carefully, three framed pictures, which he places in whatever room he sleeps. At one point, Patrick sees them on top of a dresser, a flicker of recognition and dread crossing his face. We know who they are, of course. But Lonergan never shows the photos, and I think we are grateful for being spared. Maybe even flattered at the nod to our intelligence. At the same time, there are very few directors who so appreciate the emotional efficacy of omission, of allowing an audience to put the pieces together in its head, while not being banged over it. “Manchester by the Sea” is a film that knocks politely on the door of the mind, and the heart. The advice here is to let it in immediately.

John Anderson is a film critic for The Wall Street Journal and a regular contributor to the Arts & Leisure section of The New York Times.