Bad films about gay Christians are still worth watching. 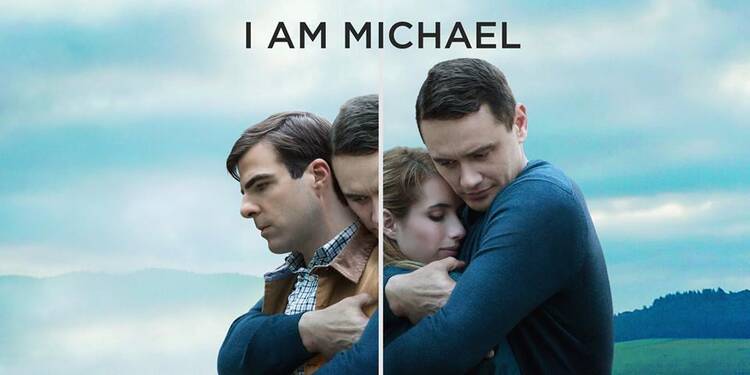 ("I am Michael," image courtesy of Brainstorm Media)

The deeper concern of “I am Michael” is individualism and its capacity for isolation. On the surface Michael’s conversion is attributed to fear of death. He’s still grieving his mother, and his increasing anxieties over relationships and religion propel him into panic attacks that make him fear that he’s dying. But when he quotes the Bible, Michael is drawn to passages about individual sacrifice: “Whoever finds his life will lose it, and whoever loses his life for my sake will find it.” “Be not conformed to the pattern of this world, but be transformed by the renewing of your mind.”

Christianity, with its promise of a new life and an overwhelming love, attracts tumultuous people who feel driven by longings their loved ones can’t understand. What do our churches do with these burning souls? How do you shepherd a sheep on fire?

Those would be fascinating questions to explore in a much better movie. “I am Michael” features silent bar brooding, sad piano-scored walking and absolutely no fun, anywhere, ever. The sex isn’t fun, the politics isn’t fun, the prayer is determined but never ecstatic or tender, and we are trapped for an hour and a half in Michael’s serious, driven, self-absorbed mind. The film is as straightforward and sincere as a PSA.

Beyond religious life and marriage: A look at friendship as vocation
Eve Tushnet

Michael is a blogger, which allows the film to use clunky voiceover exposition—but it also suggests that he’s out there alone, with no editor and no guide. Bloggers have no superiors to whom we owe obedience. Michael’s blog, then, is the synecdoche for his spiritual life. When he does seek out guidance, at a Bible college, he rebels against it because they’re teaching him to fear: “You can never, never, never stop fearing yourself,” the teacher intones. Michael became Christian to find his true self in sacrifice, not to be afraid of self-expression. This is a fascinating and deeply American story—the writer who has to start his own magazine, the preacher who has to plant his own church—and part of why it resonates is that even when Michael does seek out guidance, what he receives isn't trustworthy.

Michael’s faith separates him from his two partners. He requires endless patience with his drama, declaring: “I need to live for myself now.” Jesus’ own words might offer validation for Michael’s rejection of those who love him. But there are other ways to love Jesus. “I am Michael” reminded me of the 2015 documentary “Desire of the Everlasting Hills.” This aesthetically modest but surprisingly well-structured and well-paced film follows three Catholics who experience same-sex attraction—the film is careful to avoid any labels—who gave up sexual relationships in order to live out their faith. One man, Paul, still lives with his partner, and transformed their relationship into a chaste love. Another person returned to her ex in order to care for her during her final illness. Their stories, like Michael’s, are marked by suffering, fear of loss and unstinting sacrifice for God—but also by human loves, domestic self-gift.

Throughout Christian history people have sought to leap into the divine fire, to surrender themselves to God alone, to live with him in exclusive union. God tends to humble these people—sending crowds to the hermits, making the monks and nuns learn to live with each other—but then, the most elusive rewards of our vocations are often the parts we longed for most.

Eve Tushnet is the author of Gay and Catholic: Accepting My Sexuality, Finding Community, Living My Faith and Amends: A Novel. She is a contributing writer at America.