Can watching a Netflix series actually make you a better Catholic? 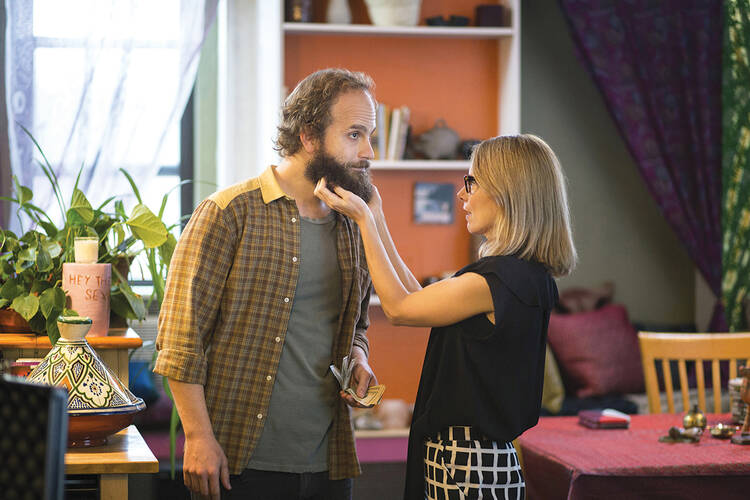 At first glance “Easy” and “High Maintenance” might look boring. Neither television show has an overarching plotline, and both have a taste for the ordinary. “Easy,” available on Netflix, holds patient focus on quotidian drama: a couple buys Halloween costumes to buoy up their marriage, two brothers bicker about their fledgling business, a washed-up author gratefully accepts attention from a graduate student.

HBO’s “High Maintenance,” which began as a low-key (and free) web series on Vimeo, is likewise mundane. Each episode follows a new character’s day-to-day turmoils and excitements. All of these characters have one thing in common: they share a “weed guy.” In one episode a man attempts to sever ties with his abusive best friend by joining Alcoholics Anonymous. In another a Muslim teen parties while her aunt and uncle sleep. In a later episode, a husband learns he has contracted chlamydia and then hosts a birthday party with his wife. “The weed guy”—an affable, balding presence—is the most reliably recurring character, but he is more of a plot pivot than a protagonist. His perspective is only sometimes inhabited, and he mostly appears in a supporting role.

“High Maintenance” and “Easy” both highlight the growing popularity of “latticework” television. This trend, coined by Richard Brody, a writer for The New Yorker, denies the viewer a primary protagonist and instead overlays the stories of multiple, tangentially connected characters throughout the course of a season. In shows like “Easy” and “High Maintenance,” Brody writes, a season unfurls “not from the pursuit of a single story but from the impulsive addition of a new facet, a new connection, a new idea.”

The latticework format is related to—though distinct from—vignette-driven television shows, which allow different perspectives to take center stage but remain focused on a tight-knit cast of characters. “Transparent,” for example, concentrates primarily on the Pfefferman family; “Orange Is the New Black” trains its eye on the inmates of the Litchfield prison; and “The Affair” spends most of its time with the two eponymous cheaters. In contrast, the wide-angle approach of latticework television draws seemingly random people together within the confines of a larger geographic area—Chicago, in the case of “Easy,” and New York in “High Maintenance.”

These shows require work on the part of the viewer, who is constantly asked to put herself in another person’s shoes—and then another’s. You cannot get too comfortable, or too sympathetic, with any one person or place. It is also the viewer’s job, rewarding though it may be, to notice how the characters are connected to one another. In “Easy,” for example, the dowdy husband attempting to connect with his wife in episode one reappears as a boisterous colleague of a despairing, though successful, actress in episode seven. In “High Maintenance,” this game of connect-the-dots is particularly intricate, as characters from the web series make thoughtful cameos in the souped-up HBO series.
The spoils of this work are comparable to the satisfaction of piecing together a puzzle. But more than satisfaction, the viewer reaps the rewards of being trained to think outside of herself and to consider what is going on inside other people. It is difficult to cling to your biases when you are required to move between at least two minds per episode and so many more over the course of a season. To use Iris Murdoch’s terminology, this is a practice of “unselfing,” which forces your ego and vanity to drop away—a prerequisite for making ethical decisions.
In addition to helping us to “unself,” latticework television encourages viewers to contemplate the daily lives of other people. In both “Easy” and “High Maintenance,” endearing and unlikeable personalities abound, and the viewer repeatedly witnesses betrayals (both minor and more intense) as well as kindnesses. These shows remind us to question the idea that for art to be morally valuable it must present us with paradigms of virtue. Both series embrace complication, with no character presented as wholly good or wholly bad. Unlike “The Sopranos” or “Breaking Bad,” both of which hone in on an anti-hero, latticework television reveals these dualities to exist in everyone. “Easy” and “High Maintenance” ask us to scatter our attention evenly among disparate and complicated people, from the people we live with to the people with whom we commute.
The value of compassion has been long debated in ethical and psychological circles. Empathy can be used to manipulate people as well as to serve them, and it can even fool us into making overly lenient and unjust decisions. The French philosopher Emmanuel Levinas goes so far as to suggest that empathy is a doomed enterprise, because there is so much room for the “empathizer” to project his or her own feelings. Paul Bloom, a Yale psychologist, argues that empathy holds far too much sway over human decision-making, leading people to be drawn to a particular set of plights close to their own hearts (he uses the example of a child falling down a well) and ignoring other forms of suffering (poverty, war, racism). While it is true that people often convince themselves that they are experiencing empathy when they are navel-gazing, my hope is that the “unselfing” quality of latticework television can serve as an antidote to solipsism.

The push to spend our attention and compassion in an egalitarian way remains valuable, though not infallible.

Take episode two of “High Maintenance,” in which we see a Muslim teenager, Easha, torn between her desires to please her aunt and uncle and to rebel against them. We watch Easha pick up her cousin from school in her hijab, try to buy cigarettes at a bodega and study at her college library while avoiding the gaze of boys. Considering the recent Georgetown study that found Catholics to have poor understandings of Islam, such an episode is a worthwhile, although very much incomplete, glimpse of what life for a young Muslim-American might look like: at times dull or joyful, and at others devastating. It is a perspective that demands our attention.
And then on to the next.
More: Films / Spirituality

Eloise Blondiau is an editorial assistant at America.

@eloiseblondiau
Show Comments (
2
)
Comments are automatically closed two weeks after an article's initial publication. See our comments policy for more.
Jim MacGregor
5 years 7 months ago
I'm no expert at TV ratings, but the shows just mentioned do not seem to be among the top rated, mostly watched ones. It would be interesting to see the network and Netflix statistics on the rental and streaming of the shows mentioned in the article as “latticework” television and compare them to other programs to determine any trend.
raju ram
5 years ago

Hello! I could have sworn I’ve visited this website before but after going through a few of the posts I realized it’s new to me.
Anyways, I’m definitely happy I stumbled upon it and I’ll be book-marking it and checking back often!voot