It's time to admit it: Benedict Cumberbatch isn't a good Sherlock Holmes 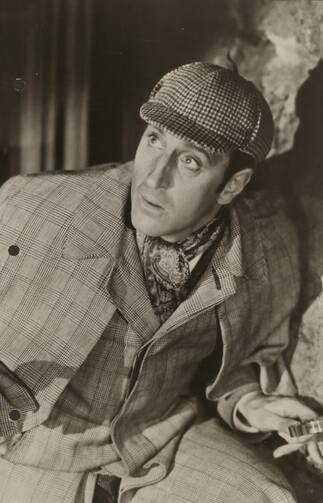 Is Sherlock Holmes back? Well, it depends on how we define “back.” Does it mean these stories are required reading in honors courses? Or does it mean new novels and short stories by wannabe Arthur Conan Doyles who imagine they can match the master? Or is it the TV series, like “Elementary” on CBS and “Sherlock” on Masterpiece, that modernizes the dark, foggy streets and mansions of 19th-century London, replaces the mumbling, servile comrade Dr. Watson with a tough-minded girlfriend and plants an iPhone in every teenaged fist?

Doyle first gave us Holmes in The Study in Scarlet in 1887 and, fed up, killed him off in 1893, sending him off in a fight to the death with arch-enemy Professor Moriarty over the Reichenbach Falls in Switzerland. “If I had not killed him,” Doyle explained, “he would certainly have killed me.” Then, in 1902, short on cash, he brought him back in The Hound of the Baskervilles. But to what extent are the current resurrections, whether “Elementary” or “Sherlock” on PBS, which are written and produced to sell as a product to the millennial generation, the same man who truly died with his creator in 1930?

Between William Gillette, who introduced the curved calabash pipe and the expression, “Elementary, my dear Watson,” 75 actors have played this role in stage plays and musicals, films, radio and TV. The Hound of the Baskervilles was produced 12 times, including in German (Der Hund von Baskerville). I’ve seen six of the leads, most memorably Frank Langella in “Sherlock’s Last Case,” on Broadway in 1990. I must have seen most of the 15 Basil Rathbone series in the 1940s, updated so Holmes could play a part in the war against Hitler, climaxing in one film with the words of Winston Churchill. Rathbone and Jeremy Brett were the two stars who did most to embed the image of Holmes in the 20th century, the latter particularly personifying the character whom Doyle created and who drove him mad.

In the last two weeks I have returned to Sherlock Holmes’ The House of Fear, Brett’s “The Hound of the Baskervilles” and “The Eligible Bachelor” and Benedict Cumberbatch’s “The Six Thatchers” and “The Lying Detective” on Masterpiece Theater.

The Masterpiece production includes much from its predecessors. Rathbone occasionally sputtered in a clipped diction, but he was usually intelligible; Cumberbatch has a speedometer on his tongue, “Thefactisthatyouarenotgivingthis therightattention.” Both are psychologically screwed up, haunted by dreams and the minute possibility they have made a mistake.

Physical action for Brett is chasing a suspect across the moor or up or down a mansion’s stairs. A Cumberbatch fistfight in the dark smashes a lot of furniture, crashes through a glass window into a swimming pool where he and his opponent  struggle under water to strangle one another. On Masterpiece a bag thrown across the room lingers in the air before descending. Between shows the BBC producers offer a mini-documentary on how to blow up a car with the biggest fiery blast.

In a climax Cumberbatch attempts to arrest an older woman whom he has declared guilty. She pulls out her revolver and fires at him point blank. In a photo-shot similar to the fast ball pitch in a baseball game when the slow motion shot shows the ball slowly on its way to the batter, we see the bullet leave the pistol and move toward Holmes’ chest. Suddenly Dr. Watson’s wife leaps in front of the bullet and takes it in the heart. She dies. In Watson’s mind, his friend Holmes has killed his wife. In the next episode the wife appears as a ghost giving advice to the detectives. Meanwhile Holmes struggles with therapy to become a human person.

The actor closest to the Holmes whom Doyle gave to history was Jeremy Brett. A perfectionist, from 1984 to 1994 he slimmed down to look like Holmes, studied the 1890s until late at night. A friend compared Holmes to a shell in which Brett lived, and eventually the two became one. With the death from cancer of his second wife in 1985 he fell into depression. Holmes was a dark and moody solitary character, while Brett was gregarious but handicapped. With a nervous breakdown Brett spent eight weeks in a psychiatric hospital and was diagnosed as manic-depressive, for which he was prescribed lithium. The medication for his depression made Brett appear bloated, and there is something pitiful about watching him playing Holmes dressed in only a long white pajama shirt running out into the street in pursuit of a woman suspect.

This month three new books—Baker Street Irregulars: Thirteen Authors With New Takes on Sherlock Holmes, edited by Michael A. Ventrella and Jonathan Maberry, The Whole Art of Detection: Lost Mysteries of Sherlock Holmes by Lyndsay Faye and Sherlock Holmes andThe Eisendorf Enigma, by Larry Millett, which is set in Minnesota—will appear. According to a review, while authors have sent Holmes to Greece, India, Brazil, Tibet, Japan and the American prairie, Faye returns him to 221 Baker Street in Victorian England. Now that I think of it, it may be time for me to write a story about Sherlock Holmes. I’m thinking of having him join the Jesuits, and going to Mars. But perhaps that has been done already.