Hospice chaplain Kerry Egan reflects on the stories and grace she has encountered in her work.

This is one of the best books I have read all year: moving, inspiring, beautifully written. It offers a valuable look into the work of a hospice chaplain, but also, and perhaps more important, it will be of use to people who put off visiting a friend who’s in hospice because they feel uncomfortable and don’t know what to say. According to Kerry Egan, you don’t have to say much. The important thing is to listen and make room for dying people to talk, to say whatever it is they need to say.

Egan helpfully dispatches the misconceptions people have about the work she does, admitting that “meaningful spiritual care is, by its nature, nebulous and ineffable, and trying to describe it tends to make you sound silly.” She encounters skepticism from a woman who equates Egan’s attempts at making “a peaceful presence” for patients with serving them coffee. Her 5-year-old son describes her work as making people die so they can go to heaven.

Egan generously shares her stories about her discoveries on the job, learning to ask evangelical Christians, for example, “What was it like for you when you were saved?” Even the most despondent patients, she finds, respond to that question with joy. She offers the reader many glimpses into the grace she has witnessed in unlikely people. The victim of a severe stroke, a violent, aphasic man whom the hospice staff had found difficult to work with, proves to have something to say when she hands him a Bible and asks him to find his favorite verse. After great difficulty his clumsy hands finally settle on a verse from Jeremiah: “I have loved you with an everlasting love; I have drawn you with unfailing kindness.”

A hospice chaplain hears a lot of stories, pieces of people’s lives that, as Egan writes, they have “poured out and puzzled over, the stories they turned over in their minds like the rosary beads and worn Bibles they turned over in their hands.” She discovers that even the repetition that many visitors find disturbing can have value, for as people retell their stories they often find new and expanded meaning in them.

A hospice chaplain learns that people carry burdensome secrets and regrets, and the prospect of dying makes them want to unload them. A woman who had lived for years hating her body says, “If I had only known, I would have danced more.” Another comments, “I never did become wise. Y’always think that when you get old, you’re supposed to become wise. But here I am, gonna die, and I never did.” One woman asks Egan to tell her son who his true father is. The resolution of that situation is one of the gems of this book.

Egan encounters a man in a public nursing home who suffers from severe pulmonary disease but hopes for a lung transplant. Rather than admit that he is far too weak to survive the surgery, he expresses anger with the doctors who seem unwilling to help him. He teaches Egan that “a chaplain’s power lies in the powerlessness of the role,” because when he is with her—someone he knows can’t get him the transplant—he can stop fighting. Instead he is able to imagine something better for himself. “Wouldn’t it be great if I could take a deep breath?” he asks, and she responds, “It would be wonderful.” Her experience with him leads Egan to reflect: “Regret hones hope, sharpens and clarifies the desire at the heart of it. If you’re alive, even if you’re on hospice, you can still work on making those hopes come true.”

My favorite passage in the book begins with an experience Egan had in divinity school, when a professor mocked her description of her work as a chaplain intern. She had said that it mainly consisted of listening to people talk about their families. “And that was this student’s understanding of faith,” he had said to a class, “That was as deep as this person’s spiritual life went!” Her classmates laughed.

But after 15 years of hospice work, Egan has gained a better understanding of the value of her original insight. “We don’t live in our heads,” she writes, “in theology and theories. We live...in our families: the families we are born into, the families we create.... Family is where we first experience love and where we first give it. It’s probably the first place where we’ve been hurt by someone we love, and if we’re fortunate, it’s the place where we learn that love can overcome even the most painful rejection. This crucible of love is where we start to ask those big spiritual questions, and ultimately it’s where they end.”

Having listened to many stories of abuse, Egan is well aware that monstrous things happen in families. But, she writes, this has made her “amazed at the strength of the human soul. Even the people who did not know love in their families knew that they should have been loved.” This passage is typical of the wisdom to be found in On Living. It is a book well worth exploring.

This article also appeared in print, under the headline “Our First Love,” in the January 2, 2017, issue. 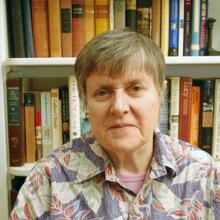 Kathleen Norris is the author of The Cloister Walk and Acedia & Me. She held the Randall Chair in Christian Culture at Providence College in 2014-15.