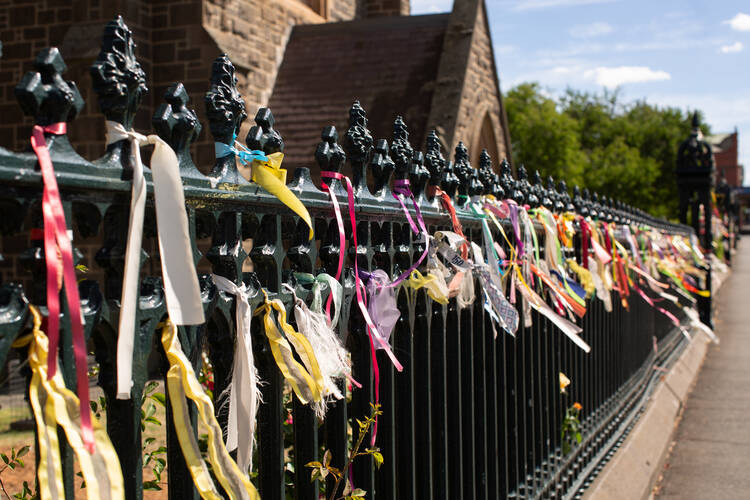 Hundreds of ribbons attached to the fence of St Patrick's Catholic Cathedral in Ballarat, Australia, have been placed in support of survivors of child sexual abuse (iStock)

During the height of the crisis provoked in 2002 and 2003 by the sexual abuse of young people by members of the Catholic clergy in the United States, John McGreevy, the respected Notre Dame historian, called it “the single most important event in American Catholicism since the Second Vatican Council” and “the worst crisis in the history of the American Church.” At the time, at least one high-ranking Roman curial official arrogantly dismissed the crisis as largely a problem confined to the United States and the English-speaking world. On the contrary, the devastating revelations of clerical sexual abuse in Germany, Belgium and elsewhere in Europe during the past year indicate that the good cardinal’s observations were wishful thinking and that this phenomenon has not been limited to les Anglo-Saxons, as Charles DeGaulle would have put it.

One may wonder if there is a need for one more entry in the crowded field of books and articles about the sexual abuse crisis in the United States, but Joseph Chinnici explores the issue from a unique perspective. A professor of church history at the Franciscan School of Theology, Graduate Theological Union, Berkeley, and past president of the American Catholic Historical Association, he is also a Franciscan friar who had to deal with this issue firsthand.

While Father Chinnici was the provincial of the California province of the Franciscans between 1988 and 1997, a major scandal of this kind came to light at their minor seminary in Santa Barbara. Father Chinnici and his fellow friars had few guidelines to follow in dealing with the crisis, but they opted for a process of transparency and the formation of a predominantly lay independent board of inquiry that came to the conclusion a year later that 11 friars had abused 34 seminarians in a case that The New York Times called “one of the largest involving sexual abuse by clergy ever disclosed.”

“This book is the fruit of my own reflection and the discussions of our brothers after twenty years,” says Chinnici. He deftly places the Santa Barbara seminary scandal within the context of the larger sexual abuse crisis that was unfolding in the United States at that time and convincingly presents it as “a dense local event revelatory of much larger patterns at the center of the crisis.” He appears to have read everything published on the sexual abuse crisis in the United States during the past 20 years, with the result that his 38 pages of endnotes are an invaluable reference work.

Chinnici is at pains, however, to point out that his main purpose is not to offer another narrative of the crisis, but to explain how the crimes of individual priests escalated into a crisis of confidence in a hierarchy that was perceived to have handled felonious clerics in an inept and even culpable way. The fear of giving scandal led many bishops to conceal the full extent of the crisis. More than a century ago, in another context, John Henry Newman criticized the “endemic perennial fidget” to suppress unedifying aspects of church history as the greatest of all scandals. Many will be grateful to Chinnici for his contention that “the naming of this ‘culture of denial’ [is] a central insight that this whole scandal has revealed.”

Like the U.S. bishops on a larger stage, the friars in California had to reconcile the requirements of civil law, canon law and the evangelical injunctions of love and forgiveness. The Franciscans seem to have been remarkably successful in negotiating the conflicting demands of these obligations. Repentant friars who had been guilty of sexual abuse were removed from ministry but not cast out from the community. A religious order committed to poverty reorganized its limited assets to provide financial compensation for the victims and reached out to them so successfully that all but a few cases were settled out of court. To prevent the recurrence of abuses in the future, the friars also created an Independent Response Team, popularly known as the I.R.T., an abbreviation that will bring a smile to the lips of New Yorkers of a certain age.

Like many other observers, Chinnici traces the underlying causes of the crisis to an abuse of power and authority rooted in the tension between the hierarchical and communal structures in the church. In a subtle twist of interpretation, however, he rejects an oversimplified “vertical” explanation of this tension as a struggle between bishops and laity. He prefers to speak of a “horizontal” division among various groups of bishops, priests, religious and laity. As a solution Chinnici calls for “the creation of a new ethical space and practice” to restore “some degree of reciprocity in relationships of mutual fidelity.”

Chinnici offers a model for how this might be achieved by citing the example of his own Franciscan tradition, especially the contribution of St. Bonaventure, with his emphasis on the primacy of love that manifests itself in fraternitas. Chinnici reminds us that the Franciscans began as a lay reform movement in an age when there was growing dissatisfaction with the hierarchy. It has been said that every medieval reform movement resulted in either a new heresy or a new religious order. The Franciscans chose the latter option, and Chinnici notes that they produced some of their most impressive achievements by maintaining strong ties with both the hierarchical structure and the communal dimensions of the church.

As a historian Chinnici points out that one of the purposes of studying history is “to keep before us the memory of the past so that the future might be shaped by truth.” The author practices what he preaches. This is not an angry or polemical book; it is an honest and candid account that is informed by the love that Chinnici tells us is the only way to get beyond the present morass.

This article also appeared in print, under the headline “Rebuilding Trust,” in the November 29, 2010, issue.

Thomas J. Shelley, a priest of the archdiocese of New York, is professor of church history at Fordham University in New York City.