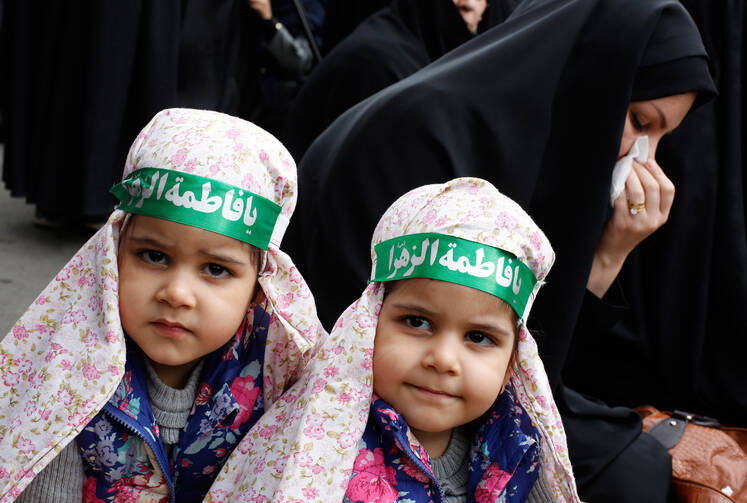 Iranian twin girls sit next to their mother during a mourning ceremony commemorating the death of Fatima, the daughter of Islam's Prophet Muhammad, in Tehran, Iran, March 2. CNS photo/Abedin Taherkenareh, EPA)

Upon receiving this book, my initial thought was, “Not another book on the future of Islam!” I searched on Amazon for “future of Islam” and stopped counting at 15 book titles that deal with the subject in one form or another. In addition, predicting the future of any religion is pretty tricky business for an outsider. In the heady years after Vatican II, who would have foreseen the election of Benedict XVI? How many people foresaw the Islamic Revolution in Iran before 1979? In the present book, Islamic scholar John L. Esposito in fact deals not so much with the future as with the present of Islam. And he does so exceedingly well. Esposito’s knowledge of Islam is vast on both the intellectual and personal level. He knows Islam and he knows Muslims. He also likes Islam and likes Muslims, which is an important characteristic not always found in works on Islam by non-Muslims.

In dealing with the present of Islam, Esposito—who is University Professor of Religion and International Affairs at Georgetown University—is extraordinarily balanced, which is probably a reflection of his control of his topic. Neither a foe nor an apologist of Islam, he clearly sees the wonderful things that Islam and Muslims have achieved and continue to achieve. But he does not gloss over the problems they are facing not only externally but internally throughout the world. Esposito cites two extremes that one finds even in the academic world. The first portrays Islam and Muslims as inherently violent and uses terrorism to bolster its opinion. It sees terrorism as the true face of Islam. The second extreme believes that Islam is a religion of peace that merely suffers from “bad press.” Terrorists are not “real Muslims.” Neither view, the author contends, considers the facts objectively or fairly.

Esposito shows that the vast majority of Muslims are peace-loving and good citizens of the countries in which they live. Muslims, he points out, are in fact the overwhelming majority of those who suffer from terrorism. On the other hand, he honestly recognizes that terrorists are profoundly convinced they are not only “good Muslims” but in many cases the “best Muslims.” And it seems that not many of their co-religionists have challenged them in this belief before they engage in acts of violence. Esposito is aware of this problem and faces it head on.

He is rightly critical of the often myopic foreign policy of the United States in dealing with Muslims. Esposito’s book should be required reading in the Departments of State and Defense, which often appear surprisingly uninformed or misinformed about Islam and Muslims. The author provides a rare insight into how Muslims around the world perceive us. And he analyzes attitudes of the American Christian right, while showing how they are perceived in the Muslim world.

Esposito’s knowledge of Muslim thinkers, religious leaders and politicians is nothing short of encyclopedic. In response to the often-heard question “Why don’t Muslim leaders speak out against…?” with “terrorism,” “dictatorships,” “female genital mutilation,” etc., filling in the blank, Esposito presents a host of leading Muslims who have in fact spoken out forcefully on such issues.

One of the most interesting aspects of Esposito’s book is his effective use of demographic data. While statistics have a notoriously short shelf life, such information is nonetheless extremely helpful for providing a “snapshot” of where Muslims are and what they are thinking (at least at present). Relying on Gallup polls and Pew demographic studies, Esposito shows how misleading is the image of a monolithic Islam, in which all think, live and behave alike. His data also show that fears of a Muslim takeover or of a coming “Eurabia” are exaggerated, to say the least.

Esposito also explores how Muslims in Europe and North America are adapting to new situations, describing how their experiences differ from country to country. In some countries, for instance, they assimilate into the overall society relatively easily without sacrificing their identity. In other countries, however, assimilation is more difficult. Finding themselves the perpetual outsider can give rise to the deracination that can lead youth two or three generations removed from the “old country” to turn to acts of violence. We have seen this in some suburbs in France—and in home-grown terrorism in Great Britain.

The Future of Islam will be welcomed by readers who want a solid overview of where Islam and Muslims are now. Who are their leaders? What are the issues—both positive and negative—that they are facing, and how are they facing them? Who are the thinkers and leading figures in the Muslim world who are working for (or against) global cooperation? What are the major trends in different Muslim communities, and what are the different responses to them? Esposito provides, in short, the kind of information that is all too often lacking in U.S. foreign policy approaches to Muslims and the Muslim world.

This article also appeared in print, under the headline “Mistaken Identity,” in the May 10, 2010, issue.

Elias D. Mallon, S.A., an Atonement Friar who works with Franciscans International at the United Nations, has been involved in Christian-Muslim dialogue for over 25 years. He is the author of Islam: What Catholics Need t