Now two years into his papacy, Pope Benedict XVI has published a work that is fast becoming a bestseller everywhere. “This book,” he stipulates, “is in no way an exercise” of his official magisterium but “solely” a testimony to his “personal search for the face of the Lord.” Through his position as head of the Catholic Church, the pope has seized a marvelous opportunity to spread around the world the good news that in Jesus of Nazareth the Son of God has come among us and shares with us abundant life here and hereafter.

Even though the pope began writing Jesus of Nazareth in 2003, some sections read like beautifully crafted biblical homilies that have been preached and polished over the years. This is the way his presentation of the Lord’s Prayer, the parables of Jesus and the principal images in John’s Gospel (water, vine and wine, bread and the Shepherd) strike me. They read like the products of long study, prayerful meditation and preaching. Whatever their precise origin, these three chapters will prompt a more profound preaching of several major elements in any portrait of Jesus, as well as a richer, personal reading of the Gospels.

After eloquent pages on the seven petitions of the Our Father, the pope highlights ways in which three parables—those of the Good Samaritan, the Prodigal Son (which he more accurately calls the parable of the Two Brothers and the Good Father) and the Rich Man and Lazarus—show how “divine light shines through in the things of the world.” They convey a knowledge of God “that makes demands on us.” Over and over again the pope illustrates the “topical relevance” of the parables. He transposes, for instance, the parable of the Good Samaritan into “the dimensions of world society,” recognizing how the peoples of Africa, in particular, have been “robbed and plundered” through “the cynicism of a world without God in which all that counts is power and profit.”

Numerous contemporary, recent and ancient biblical scholars and other authors enter the bibliography and the text itself. The long chapter about the Sermon on the Mount moves through the Beatitudes to a beautiful discussion with Rabbi Jacob Neusner about the identity of Jesus as the new Torah. The Beatitudes, as Pope Benedict rightly insists, give us not only a synthesis of the program of the kingdom but also, implicitly, a self-portrait of Jesus. Behind the preaching of Jesus about being pure of heart, searching for justice and the rest, we find the uniquely authoritative claims of the preacher himself. Summarizing the Sermon on the Mount for his Jewish interlocutor, the pope concludes: Jesus “has brought the God of Israel to the nations, so that all the nations now pray to him and recognize Israel’s Scriptures as...the word of the living God. He has brought the gift of universality which was the one great definitive promise to Israel and the world.” This “faith in the one God of Abraham, Isaac and Jaocb,” “extended now in Jesus’ new family to all nations,” is the great “fruit of Jesus’ work.”

The book is shaped by the conviction that we can truly know Jesus through the Gospels and that in him we see the human face of God. The pope argues convincingly that lesser portraits of Jesus—as, for instance, merely an outstanding prophet or reforming rabbi—fail to do justice to the historical evidence and do not explain why such a relatively “harmless” figure could be condemned to crucifixion and then go on to have an enormous and lasting impact on millions of people. Jesus of Nazareth has a sound, apologetic purpose alongside its pastoral and spiritual message. Only God can demand of us what Jesus asks. The divine identity of Jesus is no optional extra.

Benedict asks for “goodwill” from his readers, but adds: “everyone is free to contradict me.” Contradicting him would be totally unjustified, but a few respectful quibbles may be in place. I thoroughly agree with the author that our historical knowledge of Jesus is indispensable, above all because God has persistently acted in history and in the person of Jesus has entered our history. Certainly some or even many biblical scholars have produced “the impression that we have very little certain knowledge of Jesus.” But one should remember the work of such outstanding experts as Richard Bauckham, Raymond Brown, James Dunn, Joseph Fitzmyer, Daniel Harrington, Luke Timothy Johnson, John Meier and N. T. Wright (to name only a few), who certainly do not give that impression. They encourage us to join the pope in “trusting the Gospels,” because we hear in and through the Gospel texts the credible and reliable testimony of eyewitnesses and their associates.

Apropos of liturgy, the pope expresses his deep concern that “modern liturgists want to dismiss” the “social function of Sunday as a Constantinian aberration.” Evidently there are a few liturgical scholars who think that, but I have never heard or read a liturgist who defends this misguided view.

It is important to be reminded of the way in which the Eastern church has deepened an understanding of Jesus’ baptism in “her liturgy and in her theology of icons.” But I wonder what Eastern Christians would think of this account of what happened at the Jordan: “Jesus loaded the burden of all mankind’s guilt upon his shoulders and bore it down into the depths of the Jordan.”

When describing how Jesus freely accepted death to expiate human sin and inaugurate a new family under God, the pope can appeal to reliable testimony from the accounts of the Last Supper. Jesus did interpret his imminent death in that way. But did he do so precisely in the light of the Suffering Servant of Isaiah 53? It is not clear that Jesus consciously identified himself “with the suffering and dying Servant of God.”

All in all, Jesus of Nazareth excellently achieves its central purpose by showing how the unique filial existence of Jesus was “the source from which his action and teaching and suffering sprang.” It is also a profoundly moving testimony to what Jesus means to Pope Benedict XVI. What more can Catholics (and other Christians) desire from the successor of St. Peter than an utterly sincere yes to the repeated question of Jesus: “Simon, son of John, do you love me?” 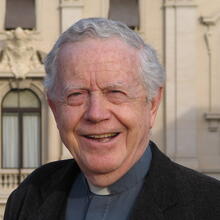 Gerald O'Collins, S.J.is a professor emeritus of the Gregorian University in Rome and currently a research professor of theology at St. Mary's University College, Twickenham, England. The latest of his 47 books is Jesus Our Redeeme