With a ‘sham trial’ of a Nicaraguan bishop about to begin, a clampdown on the nation’s Catholic Church continues 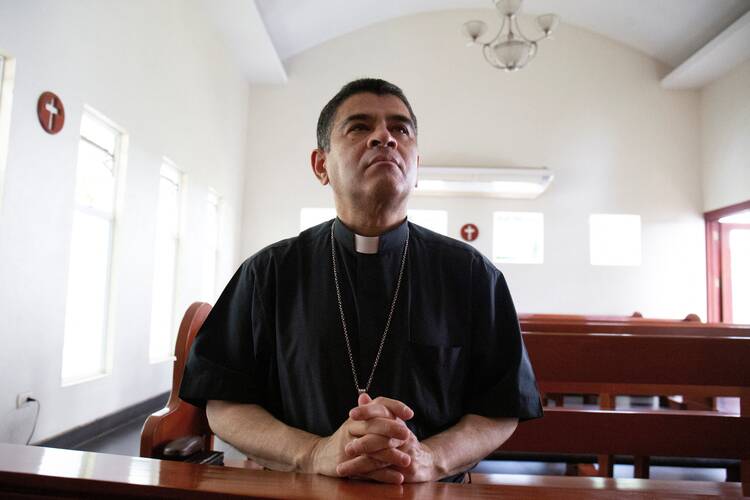 Marissa Olivares was just 16 in 1976 when she became a supporter of the Sandinista resistance then struggling to dislodge the Somoza family from power in Nicaragua. Decades later, she contemplates returning to Nicaragua to confront what she describes as a different criminal oligarchy, this one run by President Daniel Ortega, the former Sandinsta rebel who dethroned Anastasio Somoza so many years ago.

As an idealistic teen, she was willing to endure jail because of her beliefs. But now, at 62, “I don’t know if I can do that,” Ms. Olivares says. Stories of the mistreatment of people who have been imprisoned by the regime—led by Mr. Ortega and his wife, Vice President Rosario Murillo—haunt her.

Besides, as a Fulbright scholar-in-residence at Seattle University, Ms. Olivares could simply stay put after her residency concludes, joining thousands of other Nicaraguans seeking asylum in the United States. She has plenty of family and friends here already—some who left during the Somozas’ kleptocratic reign, some during the U.S.-sponsored Contra insurgency against the Sandinistas from 1979 to 1990. Now others are poised to join a contemporary flight from the Ortega-Murillo regime.

As an idealistic teen, Marissa Olivares was willing to endure jail in Nicaragua because of her beliefs. But now, at 62, “I don’t know if I can do that.”

A sociologist at a university in Nicaragua, Ms. Olivares is willing to speak on the record about conditions in Nicaragua despite the evident risk. “Don’t worry,” she says wryly. “I am already on a list in my country.”

Colleagues have been harassed and others denied re-entry after traveling outside of Nicaragua. She is uncertain if she will be allowed back in or if she faces arrest because of criticisms of the regime in articles like this one.

Her colleague at Seattle University, Serena Cosgrove, the director of the school’s Latin American Studies program and coordinator of its Central America Initiative, puts it bluntly: “Nicaragua right now… has become a totalitarian state.”

In an anti-democratic process that has escalated sharply in recent years, the Ortega regime has rounded up and imprisoned political opponents, including former Sandinista comrades. Hundreds more have been arrested for speaking out, and thousands of nongovernmental civic and humanitarian groups, radio and press outlets have been shuttered. Presidential campaigns since the 2006 election which returned Mr. Ortega to power bordered on electoral farce; in the most recent election in 2021, the government brazenly jailed candidates running against Mr. Ortega.

Mr. Ortega’s authoritarian tendencies had been evident, Ms. Cosgrove says, soon after his return to power in 2007, but they accelerated in 2018 when protests against social security cuts and the government’s inadequate response to forest fires in the Indio Maíz Reserve were violently suppressed; more than 300 people were killed.

The Catholic Church attempted a mediating role at that time but, as the last independent civic actor standing, it quickly became a target itself, according to Ms. Cosgrove. Growing harassment of the church culminated last summer with the arrest of Bishop Rolando José Álvarez Lagos of Matagalpa.

Bishop Álvarez briefly materialized in Managua for a pre-trial hearing on Jan. 10, accused of “conspiracy to undermine national integrity and propagation of false news.”

So far in 2023, religious processions celebrating feast days have been prohibited across Nicaragua, and on Jan. 17, the Rev. Oscar Benavidez Dávila was declared guilty of “conspiracy to undermine national security and sovereignty” and “spreading fake news.” Prosecutors are seeking a sentence of eight years.

On Jan. 10, Bishop Álvarez briefly materialized from what the government has described as house arrest in Managua for a pre-trial hearing, accused of “conspiracy to undermine national integrity and propagation of false news.” Exactly where the bishop is being held and under what conditions is not known. A frequent government critic, Bishop Álvarez had strongly objected to the closing of Catholic radio and television stations last year.

Ms. Cosgrove believes that, like others before him, Bishop Álvarez can expect a “sham trial,” its outcome predetermined. The use of the judiciary against the church appears to have had the desired effect. Ms. Cosgrove believes that faced with the choice of arrest or exile, priests, religious and other church leaders in Nicaragua have opted for silence in order to remain present in a pastoral capacity.

The bishop’s trial is scheduled to begin on Jan. 23. There are some indications that the proceedings may not go as smoothly as the Ortega-Murillo regime might hope. According to Artículo 66, a Nicaraguan digital journal, Nieves Hernandez of Matagalpa, a former employee of the diocesan radio station, is among those who will be called to testify by prosecutors. On his Facebook account on Jan. 19, he wrote: “I've never sold myself or will betray my church or our priests and long live Monsignor Rolando.”

Nicaraguan human rights advocates continue to plead for a stronger denunciation of the regime from Pope Francis and other global church leaders. The Vatican has limited itself in recent months to expressions of concern. In September, Pope Francis said he did not understand the behavior of the Nicaraguan government but hoped to remain in dialogue with it.

A frequent government critic, Bishop Álvarez had strongly objected to the closing of Catholic radio and television stations last year.

In a statement released on Dec. 16, Bishop David J. Malloy of Rockford, Ill., chairman of the U.S. Conference of Catholic Bishops’ Committee on International Justice and Peace, called on the U.S. government and the international community “to pursue the immediate release of Bishop Álvarez, the restoration of religious freedom and human rights guarantees, and initiate a process of restoring the democratic order and the rule of law in Nicaragua.”

But such condemnations do not appear to concern the Ortega-Murillo regime, which seems only to have become emboldened by its near complete international isolation. “They don’t care about any consequences,” Ms. Olivares says. “They don’t pay any attention to any system of international regulation; they are not accountable” to any international or multilateral political entities.

Though Mr. Ortega, the former Sandinista, still talks a good game about the virtues of socialism and repeats familiar slogans about the pernicious intrigues of the United States, to Ms. Olivares, there is nothing left that reflects the idealism of the past, nor even any loyalty to the political ambitions of socialism.

“This group of people that call themselves Sandinista who are in power…don’t represent with their actions, with their policy, any kind of political ideology.” They are, in fact, closer to a criminal mafia, she says, “who control the economics… the politics, the institutions of the country.”

“This group of people that call themselves Sandinista who are in power don’t represent with their actions, with their policy, any kind of political ideology.” They are, in fact, closer to a criminal mafia.

“You can’t use this kind of historical understanding of ‘left’ and ‘right’ to analyze what’s going on in Nicaragua right now because it doesn’t fit into that framework,” Ms. Cosgrove says.

“A number of progressive, middle-aged and older adults in the United States that have been following Central America have this kind of romanticized version of the Sandinistas, so there’s a hesitancy in some places on the left here … to criticize what’s what’s going on in Nicaragua,” she adds.

But there is much to criticize. “All the [civic] spaces are closed in my country,” Ms. Olivares said. “Nobody is saying anything in the media, in the social networks; everybody is shut down because everybody is afraid.”

And now that silencing has extended to the church, she says, a source of frustration to average Nicaraguans. In the past, she says, Nicaraguan clergy stood fearlessly on the side of oppressed people. But now “the strong priests are in jail or in exile,” she concludes.

Still, she has plenty of sympathy for those unwilling to speak out. “I can’t judge because I’m not in Nicaragua,” Ms. Olivares says. “I am talking freely to you here in the U.S. It’s not easy to speak loudly in Nicaragua,” but “the feeling against this regime is just despair.”

More than 328,000 people—about 5 percent of the country’s population of 6.7 million—fled Nicaragua last year, spiking to the top of U.S. border patrol lists.

“The main decision of most Nicaraguans from every single social status is to just leave because the economic situation is hard, the political situation is hard,” Ms. Olivares says. “The people who can leave are leaving.”

In fact, more than 328,000 people—about 5 percent of the country’s population of 6.7 million—fled Nicaragua last year. The New York Times reports that the number of Nicaraguans seeking asylum in the United States has spiked to the top of U.S. border patrol lists. By the end of November 2022, more than 180,000 Nicaraguans had crossed into the United States—about 60 times as many as the number who sought entry during the same period two years ago. (In an attempt to deal with the alarming conditions at the border because of these latest waves of dislocated people from Nicaragua, Haiti, Venezuela and Cuba, the Biden administration announced new measures this month meant to curtail irregular migration but open broader channels for legitimate asylum claims.)

“You have over 200,000 people seeking refugee status in Costa Rica,” Ms. Cosgrove says. “You have other Nicaraguans in other parts of the world seeking political asylum.”

What does solidarity look like under such conditions? Ms. Cosgrove suggests supporting Nicaraguan asylum seekers, particularly in hard-pressed Costa Rica, urging more humane immigration policies here in the United States and assisting Nicaraguan journalists working underground or in exile. And she argues that, despite a messy history of meddling in Nicaragua’s affairs, the United States should continue to press for the release of political prisoners and the restoration of human rights and political order in Nicaragua.

Among those who stay behind, some find hope for change simply in the fact that the elderly Mr. Ortega and Ms. Murillo cannot go on much longer, according to Ms. Olivares. But the couple share nine children (one, a step-daughter to Daniel Ortega who accused him in 1998 of sexual and psychological abuse, lives in exile). Several Ortega children appear poised to step forward as part of a new generation of family leadership, replicating a cycle of corruption and oppression Nicaragua seems incapable of escaping.