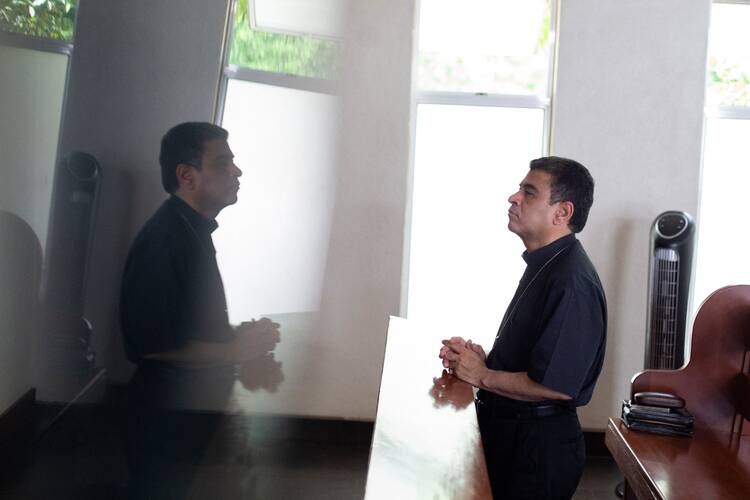 Bishop Rolando José Álvarez Lagos of Matagalpa, Nicaragua—a frequent critic of Nicaraguan President Daniel Ortega—prays at a Catholic church in Managua, Nicaragua May 20, 2022. Bishop Álvarez was arrested in August and was formally charged during an unannounced Dec. 13 court date, marking his first appearance since being detained. (CNS photo/Maynor Valenzuela, Reuters)

Bishop Rolando Álvarez Lagos of Matagalpa was accused of conspiracy to undermine the country and propagate false news, according to a statement from the courts in the national capital, Managua.

Bishop Álvarez was assigned a public defender and told his trial would start Jan. 10, according to the statement, which included photos of the prelate, appearing gaunt, looking stoic and wearing a blue shirt while sitting in court. More than 40 political prisoners have been convicted on the same charges, according to the newspaper Confidencial.

More than 40 political prisoners have been convicted on the same charges as Bishop Álvarez, according to the newspaper Confidencial.

The court statement also said it had requested that Interpol issue an alert for the arrest of another priest, Father Uriel Antonio Vallejos, who is accused of similar offenses.

Bishop Álvarez’s court appearance came after months of being incommunicado with no information on his condition being released. The Nicaraguan bishops’ conference also refrained from speaking out on Bishop Álvarez’s condition as the regime of President Daniel Ortega and his wife, Vice President Rosario Murillo, continued persecuting the church and other critical voices in the Central American country.

The persecution has been so severe and so capricious that more than a dozen priests have been arrested or forced to flee the country. Other prelates and Catholic groups have been expelled, including the apostolic nuncio, the Missionaries of Charity and Trócaire, the charitable arm of the Irish Catholic Church.

The persecution has been so severe and so capricious that more than a dozen priests have been arrested or forced to flee the country.

Repression against church workers and Catholics has continued in December. Manuel Antonio Obando Cortedano, communications director in the Diocese of Matagalpa, was abducted by police as he left his home Dec. 11, according to the news website Mosaico CSI. Wilberto Artola, a journalist with a Catholic media outlet TV Merced, was also abducted that night.

Bishop Álvarez was arrested Aug. 19, during a predawn raid on the diocesan curia, where he was holed up with 11 other priests and colleagues. The others arrested with him remain locked up in El Chipote, a prison notorious for inhumane conditions.

The bishop had been protesting the closure of Catholic media outlets in the Diocese of Matagalpa. Father Vallejos, meanwhile, resisted an attempt at seizing radio equipment from his parish.

Murillo, who is also the government spokeswoman, did not respond to a request for comment.