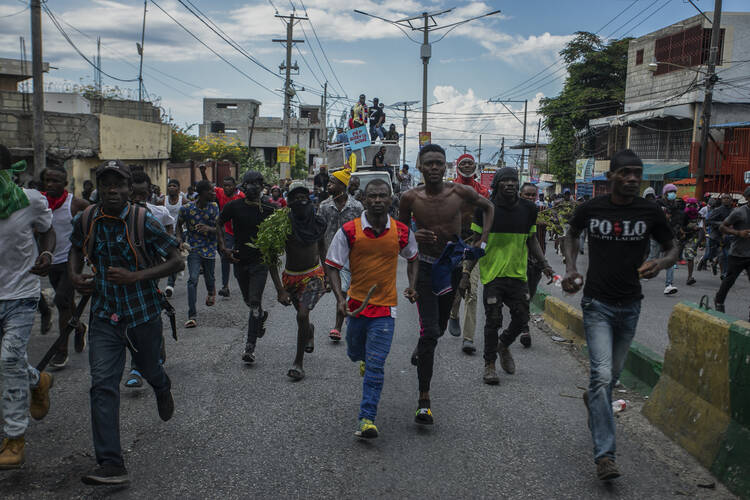 Armed gangs increasingly rule the streets of Port-au-Prince, seizing ports, blocking food and fuel shipments, and preventing basic services and markets from functioning. At times violent street demonstrations against the government have only added to the general civil disorder. On Oct. 14, the nation’s de facto leader, Ariel Henry, issued an appeal for an international military intervention to restore order.

“Roads are blocked, and [staff] can’t get on the road to go to the office,” Akim Kikonda, the C.R.S. country representative, told The Associated Press. “There is no gas to drive their cars, and in some cases there is no internet at the office.”

He added: “You can imagine our frustration...when we see the needs are greater than they have ever been, but we are unable to go meet those needs.”

We asked Jean Denis Saint Félix, S.J., the Jesuit superior in Port-au-Prince, to describe current conditions in Haiti and to share his thoughts and hopes for a way out of the nation’s seemingly endless crisis. This interview was conducted over email and has been edited for length and clarity.

Can you offer a brief situation report on conditions in Haiti: What is happening to its common people? Is a hunger and fuel crisis looming?

Since 2018, the Jesuits in Haiti have been calling the attention of both the national and international communities to the worsening situation in Haiti on every level. Back then we said that Haiti was on the verge of not only a humanitarian crisis, but a total humanitarian catastrophe.

Jean Denis Saint Félix, S.J.: Haitian people are living in what may be easily compared to hell. No electricity, no running water, no transportation because there is no fuel. Unhealthy conditions everywhere.

Today, 16 months after the assassination of the former president Jovenel Moïse—a crime which the name of the de facto prime minister Ariel Henry has from the very beginning been associated—Haitian people are living in what may be easily compared to hell. No electricity, no running water, no transportation because there is no fuel. Unhealthy conditions everywhere. Even garbage serves as a political tool here.

Even those who considered themselves middle class are literally starving, and violence is everywhere, especially in the capital. The specter of kidnapping threatens every corner of Port-au-Prince.

Communication between the different provinces has long ceased because of the lack of fuel and the insecurity caused by the armed gangs. Telephone and internet services have become a luxury. There are no schools for children and young people—universities and hospitals are closed. Banks and public offices are working three days a week.

Some private and international institutions have simply closed their doors. On top of this, the cholera that has been brought here by the U.N. troops in 2010, causing more than 10,000 deaths, is back in most of our major slums in Port-au-Prince, where people are living in the worst conditions imaginable.

There is no life for Haitian people other than hunger, lamentations, violence and death. It is all a catastrophe here. The frontier between life and death is only imaginary.

Why can't government and security forces get control of the streets and protect vital infrastructure?

Because of its lack of empathy, its incompetence, its illegitimacy and the corruption that characterizes the actual government, there is no way that it can solve the problems of insecurity provoked by gang violence and the misery that Haitian people are facing today. Furthermore, the government has never demonstrated any willingness to do so. We have to say also that some members of the government have been linked to some gangs that have acted like collaborating extensions of interests inside Haiti’s political and private sectors. Many gangs now, of course, follow their own interests, to the people’s detriment.

Even those who considered themselves middle class are literally starving, and violence is everywhere, especially in the capital. The specter of kidnapping threatens every corner of Port-au-Prince.

How did these criminal gangs become so powerful?

For the past 30 years or so, armed gangs have been used by Haitian politicians to move themselves into power, to eliminate the adversaries and then to stay in power. Individuals in the private sector have also used armed gangs to protect their business and to discourage competition. Haitian economic life is monopoly-based. It is a rent-seeking economic system.

Experts here talk about an “economics of violence,” a criminal economy. We could also say that Haiti endures a “politics of criminality.” Crime has become a normal way of operation.

Are churches and religious institutions particularly targeted by criminals? How are you protecting yourselves and carrying out your pastoral work?

I do not think that the church has been targeted more than other institutions or individuals. I do think, though, that we, living with the people as we do, have also become targets and victims very much like them. I should add, though, that there are some sectors within Haitian society that clearly promote an anti-church discourse and anti-Catholicism. That has been very clear since the Michel Martely and Moïse administrations.

In this context, protecting ourselves is simply an oxymoron; anything can happen to us whenever and wherever we are, regardless of the measures of precaution we may put in place. We try to limit our activities and to avoid certain zones in Port-au-Prince. But all these precautions can be pointless since some of us are working right in places where things are worse—providing care for the needy, food for the hungry, and education and dignity for the least among us. So, like our Haitian brothers and sisters, we are kidnapped, killed and our houses are robbed and ransacked almost on a daily basis.

How do the Haitian people want the United States and the international community to respond? Are they losing hope?

Haitian people are very resistant—I don’t like the word resilient. We are a people of hope and faith. We are not like people in other nations who are afraid of suffering. We are not made of wood, either. Our patience and fighting spirits are being eroded. This is all too much for one people to endure.

We need our fellow Catholics all over the world not only to pray for us, not only to have compassion and take pity on us, but to act, to question the racist politics of their governments toward Haiti.

We are feeling helpless, forgotten and abandoned by the other nations, especially the United States, Canada and France who have responsibility for what is happening in our country since they are the ones who usually put in place and support our corrupt and bloodthirsty governments.

How do such conditions affect migration? Do people feel trapped? Unable to remain but anxious about how dangerous undocumented migration can be?

In this context, the only way out for most people, especially the youth, is to leave Haiti by any means. And this is what they are doing.

Our professionals of all kinds, our students, our teachers are leaving. It seems that we have two options: Let ourselves be kidnapped or killed, or to migrate. We, as religious, and a remaining few, believe in a third way.

We want to continue to resist, to make proposals for a new Haiti built on dialogue, hard work, trust and transparency with a different class of local politicians and entrepreneurs who finally consider Haiti as their home and not a mere business opportunity.

We also need a renewed relationship with the international community that is ready to break away from a colonialist, racist and patronizing paradigm that has plagued Haiti and to engage with legitimate actors in Haiti, its civil society—the majority of which is not corrupt like Haiti’s typical politicians, to work with these civil society actors as the main agents of the development of their own country. I would like to emphasize: Haiti does not need humanitarian aid anymore; we need strong and practical investments in health, infrastructure, agriculture, and education and research.

What is the moral call during this crisis to the international community? To fellow Catholics?

We need our fellow Catholics all over the world not only to pray for us, not only to have compassion and take pity on us, but to act, to question the racist politics of their governments toward Haiti. We need concrete solidarity and brotherhood, substantial help to courageously rebuild our beautiful country so that our children and grandchildren do not have to migrate to the Dominican Republic or to make the perilous trip to the coast of Florida and be treated worse than animals.