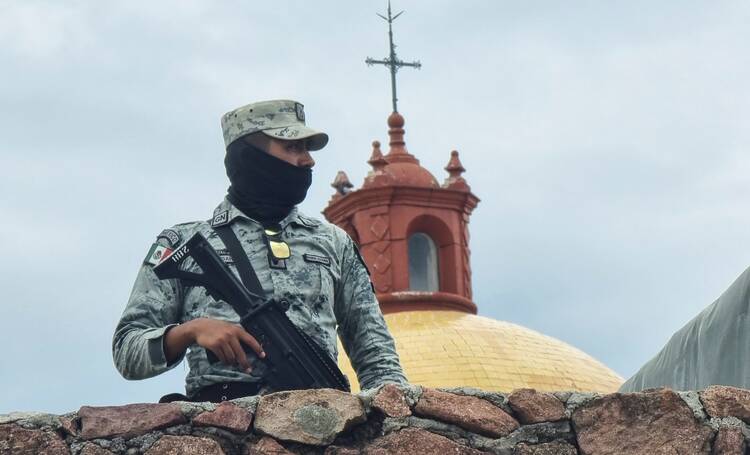 A member of the Mexican army stands guard outside St. Francisco Javier church in Cerocahui on June 22, 2022. Jesuit Fathers Javier Campos Morales and Joaquín César Mora Salazar were murdered at the parish on June 20 as they offered refuge to a tour guide seeking protection. (CNS photo/Reuters)

The Jesuits of Mexico celebrated a memorial Mass on Sept. 28, marking 100 days since “the painful murders of our brothers Javier Campos, S.J., and Joaquín Mora, S.J.” The celebration was conducted in Cerocahui, Mexico, an Indigenous community in the Sierra Tarahumara region of Chihuahua State, where the two men had served for decades and where they were murdered on June 20.

In a statement released on Sept. 28, the Jesuits demanded that the Mexican government end a “lacerating impunity” and effect the arrest of the prime suspect in the homicides, Jose Noriel Portillo Gil, a member of the Sinaloa drug cartel.

The criminal justice system in Mexico routinely fails to provide justice to victims of violent crimes and human rights violations.

“Criminal networks continue to operate in the municipality of Urique, Chihuahua, and the alleged perpetrator of the crime, a criminal leader in the area, remains at liberty,” the Jesuits said. “This generates fear in the communities and great uncertainty about the future. It is essential that these murders not go unpunished.”

Nicknamed “El Chueco,” or “The Crooked One,” Mr. Portillo is well known to local police because of his role in drug trafficking and other crimes in the region.

“Our position, after 100 days and after having recovered the bodies, is clear: We demand the municipal, state and federal authorities to be aware of their obligations,” said Luis Arriaga Valenzuela, S.J., president of Universidad Iberoamericana, in Mexico City, in an email to America.

According to Human Rights Watch, the criminal justice system in Mexico routinely fails to provide justice to victims of violent crimes and human rights violations. Only 5.2 percent of crimes committed in Mexico are solved, México Evalúa, a think-tank focusing on improving civic performance, reports. Since 2010, more than 100,000 cases of “disappeared” people remain unresolved in Mexico, according to human rights advocates at the United Nations.

Father Arriaga said the Jesuit province in Mexico and networks of solidarity connected to the Society of Jesus intend to keep up the pressure to ensure that the murders of Fathers Campos and Mora do not become just two more unsolved homicides.

Luis Arriaga Valenzuela, S.J.: The murders of Fathers Campos and Mora are “about to join the overwhelming number of crimes that are forgotten due to the impunity that distinguishes our judicial system.”

He worries: “As time goes by, the possibilities of achieving justice diminish.

“This case is about to join the overwhelming number of crimes that are forgotten due to the impunity that distinguishes our judicial system,” he said. But “a judicial process that ends up clarifying the facts strengthens the community and sends a message to the perpetrators.”

According to local police and security forces, the Jesuits were murdered by Mr. Portillo in the culminating act of violence during a daylong murder and kidnapping spree that left four people dead. The two elderly Jesuits had come to the aid of another man, also killed, who was seeking sanctuary from his attackers inside the San Francisco Javier church in Cerocahui.

Incredibly, the rampage began in a dispute over a baseball game lost by a team sponsored by Mr. Portillo. He is also suspected in the murder in 2018 of an American tourist, Patrick Braxton-Andrews, a Spanish-language teacher from North Carolina.

The killing of the two Jesuits provoked international outrage and calls for a strong response from Mexican police and security forces. An unprecedented $250,000 reward was offered for information leading to Mr. Portillo’s capture. In the days after the crime, Mexican President Andrés Manuel López Obrador personally lamented the murders and seemed to suggest that Mexican authorities were really ready—this time—to bring Mr. Portillo to justice.

Now more than three months later, El Chueco remains at large, even releasing a menacing video on Aug. 25, denying a direct role in the bloodshed in Cerocahui and threatening the surviving priest at San Francisco Javier.

“This case is an example of weak rule of law characterized in many cases by different types of collusion or tolerance between local authorities and organized criminal groups.”

That priest, spared during the murders, and two Jesuits recently reassigned to the parish remain in Cerocahui. After the new threats issued in the video, they are now accompanied in their pastoral work by a military escort.

Despite the killings and continuing security concerns, the Mexican province dismissed any notion of closing its mission in Cerocahui. Jorge González Candia, an advisor to the Society of Jesus in Mexico, told The Associated Press. “We saw very clearly that we could not withdraw due to the fear or insecurity that exists.”

With pastoral, social and educational missions in 15 states across Mexico, Jesuits have been shaping the country’s political and cultural life for 450 years, Father Arriaga said. The order has been in Sierra Tarahumara since the 17th century.

“The primary objective is the re-establishment of peace in the community of Cerocahui,” Father Arriaga said. “This event, as Jesuits, challenges us. We will not cease in our demands or in the search for a territory in which human rights are fully guaranteed.” He added that the province will continue to stand with the Indigenous Rarámuri communities of the region. “They are the ones who are most exposed to uncertainty, fear and vulnerability.”

While it is especially notable, given the tremendous media attention generated by the murder of two Jesuit priests, Mr. Portillo’s evident impunity in Sierra Tarahumara is emblematic of a widespread problem in Mexican society, said Stephanie Brewer, the director for Mexico at the advocacy group Washington Office on Latin America.

El Chueco’s evident impunity in Sierra Tarahumara is emblematic of a widespread problem in Mexican society.

“This case is an example, certainly, of weak rule of law characterized in many cases by different types of collusion or tolerance between local authorities and organized criminal groups,” Ms. Brewer said.

Mr. Portillo and his criminal colleagues have long maintained a high degree of control in the region, she said, victimizing the population “without the authorities effectively stepping in.”

As a candidate, Mr. López Obrador campaigned on a commitment to reduce the level of violence in Mexican society with a “hugs, not bullets” approach that emphasized social interventions over combat-style confrontations between security forces and organized criminal networks. But whether his administration did not produce enough hugs or his “not bullets” commitment was too often observed in the breach—the president has made large investments in new security forces—crime and social chaos have only accelerated under his leadership. More than 33,000 people were victims of homicide in Mexico in 2021.

That has meant increasing pressure on the president to adjust his security strategy. In recent weeks the federal government has fully militarized public security forces, Ms. Brewer pointed out, placing the previously civilian-led National Guard under military control and “doubling down on military deployment as its main security strategy when that has not been effective in reducing violence over the past decade and a half.”

Ms. Brewer argued that a more effective anti-crime program would focus on rooting out corruption and collusion at the local level and “making sure there are checks and balances and accountability mechanisms so that authorities can both have the capability and the will to act long before these kinds of cases happen.”

Mr. Portillo’s lengthy criminal history was no secret long before his fatal encounter with the Jesuits in Cerocahui. “This is a case that never should have occurred,” Ms. Brewer said.

She is concerned about a swing of the political pendulum “back toward a more combat-oriented and more use-of-force strategy, mano dura.” That “iron fist” strategy has been a cyclical fallback, she said, “not only in Mexico but throughout the region.” It is one that proposes “an extremely alarming scenario for human rights.”

In its statement the Mexican province warned that stronger enforcement alone would not bring peace to a nation enduring historic levels of homicide and violent crime. “It is urgent to strengthen security for the civilian population in the region, with a strategy that wagers on peace in the medium and long term,” the Jesuits said. More armed forces “are not the solution to combat violence in Cerocahui” without civil and community interventions that are also necessary “to build peace and security.”

“The tragedy of our dear Javier and Joaquín has left pain and indignation, but they have also created a ferment to continue walking a path for truth and justice for all victims of violence in our country,” Mexican province members said.