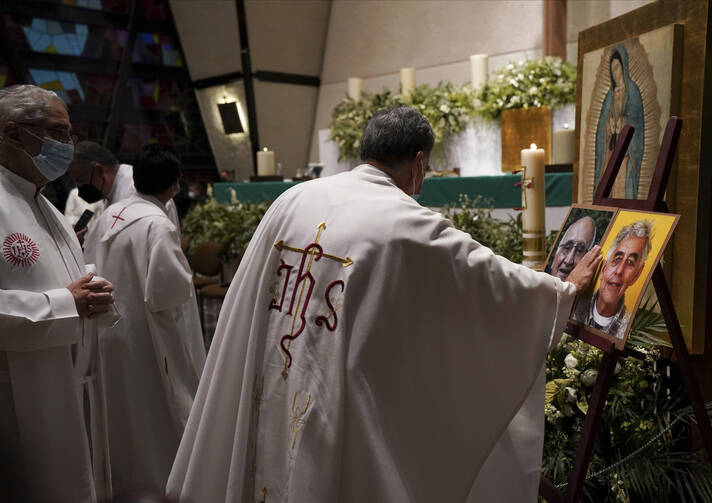 A priest touches the photos of Jesuit priests Javier Campos Morales, left, and Joaquin Cesar Mora Salazar during a Mass to mourn their death, at a church in Mexico City, on June 21, 2022. (AP Photo/Fernando Llano)

A little reminder about headlines, names and people came for me yesterday morning. America Media, like scores of other news sites, had run a story with the names of two Jesuit priests murdered in a church in northern Mexico. The news was shocking and terrible, but the faces of the elderly priests and the names that ran with the story did not mean all that much to me except as the faces and the names of the latest victims of another violent crime in Mexico.

But one of those names—Joaquín César Mora Salazar, S.J.—meant a lot to a woman who called me in tears from Mechanicsburg, Pa.

Lucero desperately wanted me to know that Father Mora was much more to her than just another name, another victim, another number in Mexico’s spiraling civil violence.

She told me her name was Lucero and she desperately wanted me to know, anyone to know really, that Father Mora was much more to her than just another name, another victim, another number in Mexico’s spiraling civil violence. He had been her middle-school teacher and her lifelong friend. He was the man who married her and her husband. He was well-known and admired in his native Monterrey, Lucero told me, and beloved among the Indigenous people he lived and worked with for decades in Chihuahua state.

At 80, Lucero said, Father Mora should have been enjoying a well-earned retirement someplace safe and warm. Instead, Father Mora decided to remain in Chihuahua. He told her: “I cannot leave my brother Jesuits.”

“He gave everything to his church and his community,” Lucero said. “He was a living saint,” she added, “and now he is a martyr.”

I learned a little more today about Father Mora. He was born in Monterrey and joined the Society of Jesus at age 16. Nicknamed “El Morita,” he was ordained in 1971. He worked in the Tarahumara region between other assignments in the 1970s and ’80s before returning full time in 2000.

Javier Campos Morales, S.J., 79, who was killed with Father Mora, had spent half a century serving the Rarámuri Indigenous community—his entire career as a priest. Well before many roads were paved in the Tarahumara, Father Campos crisscrossed the region on a motorcycle. His familiar imitation of a rooster and love of singing earned him the nickname “Gallo.”

The Rarámuri people the two men served have suffered centuries of poverty, exclusion and exploitation. Loggers have plundered their forests and drug gangs cultivate marijuana and opium poppies in their mountains. The Rarámuri are famed for their ability to run long distances through their mountainous terrain.

President Andres Manuel Lopez Obrador claimed at a news conference on June 21 that the government has a lead on the killers of the two priests and a local man they were trying to protect. But local people are not reassured. Criminal impunity has been the rule in Chihuahua.

There are at least 12 armed criminal groups currently active in this border state—smaller gangs that splintered off from a handful of drug cartels that had ruled the lawless regions of Mexico for decades. The gangs, no longer constrained by the cartels, have branched off, seeking new revenue streams from kidnapping, extortion and old-fashioned strong-armed robbery.

No one in a leadership position in Mexico’s state or national governments appears to have a solid idea about how to stop the violence. Each month thousands of small arms move across the border from the United States, fueling the mayhem, even as the drug trade, the backbone of criminal activity in Mexico, moves tons of product north to U.S. consumers.

Lucero called me yesterday because she wanted Father Mora to be remembered as far more than just the latest emblem of this civil chaos in Mexico, but as a real person who died under absurdly cruel circumstances.

“I thought you should know what kind of priest he was, what kind of human being he was…. I know God has a plan for all of us,” Lucero said, her strong voice suddenly failing. But this ending for so saintly a man? “This is not fair,” she managed.

On June 20 Father Joaquín Moras and his brother Jesuit Javier Campos were murdered in a church in Ceroachui, Tarahumara, Mexico, trying to prevent violence to another man who had come to them seeking sanctuary. Their bodies were pulled from the church, dumped into a truck and driven away by their murderers, indifferent to the pleas of a remaining priest who somehow survived the ordeal.

Close to 100 people are murdered each day in Mexico—each one of them a name and a face and a story that I will not be able to tell today.