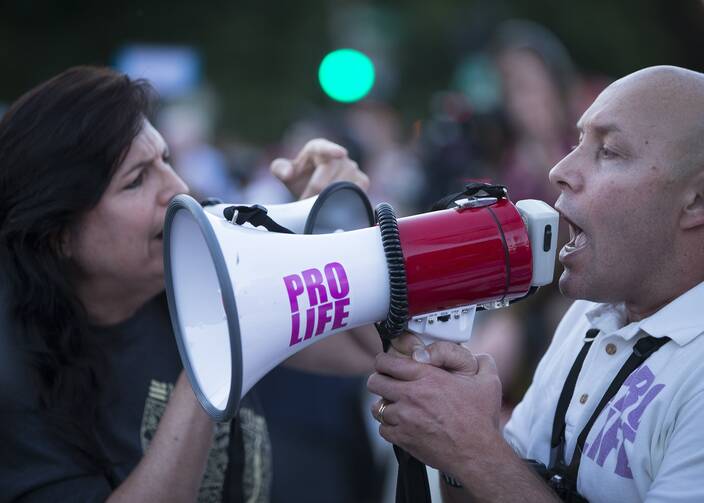 When news broke that the Supreme Court is planning to overturn Roe v. Wade, I found myself unsure how to respond. Roewas settled law by the time I was born, or so I thought, but since much of my moral formation came from anti-abortion advocates, I grew up opposing it vociferously. As I learned more, I concluded that legal prohibitions on abortion did not necessarily mean the end of abortion, and I focused more on advocating for social measures that would alleviate the perceived necessity of abortion.

Now that Roe seems to be on its way out, a feeling like grief has settled in my stomach. But grief for what? Certainly, my heart breaks for the women who choose (or are coerced into obtaining) abortions, and for the fetuses subjected to the tragic violence of that choice. I grieve for the women and girls who will become pregnant and feel trapped, unsure how to claim their dignity in a world that marginalizes them and their bodies. I lament the intersectional issues that give rise to abortion, including the patriarchal constructs that have limited the participation of women in the public sphere and the systemic racism that feeds directly into the factors that motivate women to procure abortions.

The human desire for power and the ways it has manifested in social life lends itself to a cycle of violence and domination. It has convinced some women that in order to succeed in life they must dominate those more vulnerable than themselves, including unborn children. But this logic of domination has also tainted the pro-life political movement—as has its alliance with Donald J. Trump, who has based his entire governing philosophy on domination. Failing to convince a majority of the U.S. population that abortion is morally wrong, this movement has instead contributed to the destabilization of our democracy and celebrated the accumulation of political power.

The human desire for power has convinced some women that in order to succeed in life they must dominate those more vulnerable than themselves, including unborn children.

Randall Terry, the founder of Operation Rescue, compared legal victory at the Supreme Court to warfare: “This is like D-Day for us,” he told The New York Times. “This is taking the beach. It is not the end of the war. We will make it to Berlin.”

The violence of Mr. Terry’s statement shook me. To some in the pro-life movement, “victory” comes from the desire to dominate at all costs, and from refusing to listen or to encounter others in a space of humility. But women who believe their right to bodily integrity should not be subjugated to their fetus’s right to life are not the enemy. They are not to be pummeled into surrender. Their bodies are on the line, too.

Overturning Roe would allow for more discussion about how to balance a woman's right to bodily integrity with fetal rights. But we need to understand that there are new dangers to women here, encompassing both their physical well-being and their privacy. In some states, women are already subject to criminal investigations for miscarriages, being forced to prove that their deeply personal losses were not deliberately caused by their own actions. I raise this point not to conjure a “Handmaid’s Tale” dystopia (though it is perhaps telling that it lends itself to such an image) but to underscore that in the so-called pro-life war, the battleground is always a particular woman’s uterus.

Women who believe their right to bodily integrity should not be subjugated to their fetus’s right to life are not the enemy. They are not to be pummeled into surrender.

It is worth noting, too, that this same language of dominance and violence was allegedly used by the man who murdered 10 people in a grocery store in Buffalo on May 14, targeting the area because the majority of people in the neighborhood are Black. The pro-life movement has achieved victory in the courts in part by supporting a political party whose ranks include a number of leaders who attack immigrants and implicitly promote ideas echoed by the shooter in Buffalo, such as the “great replacement theory.” If the political posturing is indeed warlike, we must acknowledge and repent for the human toll this has taken.

Most of all, I grieve the lust for power that can affect even Christian movements, blotting out the prophetic witness of our belief in the fundamental humility of Christ.

Embodying humility does not mean that we should give up on what we believe is right, but it does mean that we should listen to those who think otherwise, and try to come to solutions through dialogue and compromise. If we support legal protections for fetal life, for example, we should do so with a clear acknowledgment of the choice we are making and with an unwavering commitment to remedy the harms that may occur if we succeed. There is no way to respond justly to the tragedy of abortion without changing our cultural paradigm from one of individual autonomy and domination to one of humility and interconnection. But this is a shift unlikely to occur in the near future, and so we simply have to do the best we can, lamenting our limits as we try to do better.

It is up to us Catholics and people of good will, wherever we fall on the political issue of abortion, to adopt a posture of humility and avoid perpetuating the logic of domination that has contributed to our current cultural impasse. We need to foster a society that embraces humility: a humility that recognizes that our own sense of the good always will be partial, that our moral vision is always limited.

We need also to reject the patriarchal constructs and systems of white supremacy that deny the significance of mothers and people of color precisely because of a desire to keep power in the hands of the powerful. We should work toward measures that reduce abortion with sober compassion and vigorous efforts to protect the bodily integrity and social equality of women. We need to eschew the logic of domination so that we can begin to listen to one another, weeping with those who weep, letting their tears become ours and, somehow, forging a way together to the just inclusion and participation of all.

[Read next: “I support overturning Roe. But pro-lifers need to understand why so many Americans fear this decision.”]

Kathleen Bonnette, Th.D., is an adjunct professor of theology at Georgetown University, the 2022 Imbesi Family St. Augustine Fellow at Villanova University’s Augustinian Institute and a home-schooling mother of three. She is working on a new book, The Grace of Conversion: Confessions for the 21st Century, which explores new dimensions of the age-old question, “What do I love when I love my God?”