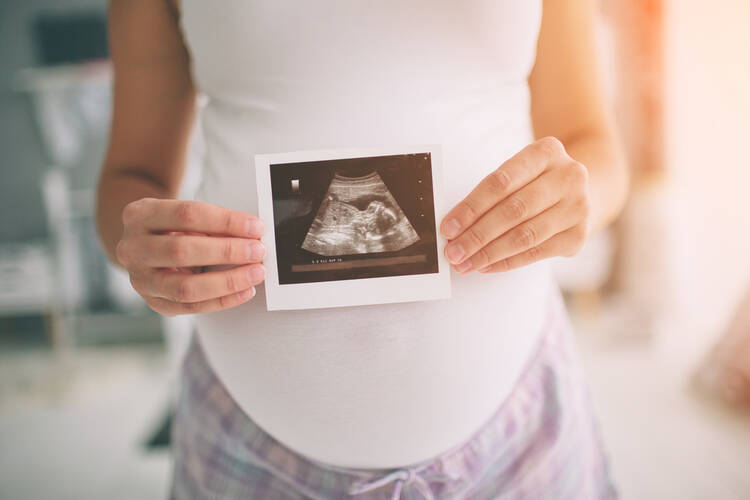 Editor’s note: This article is part of The Conversation with America Media, offering diverse perspectives on important and contested issues in the life of the church. Read other views on abortion, as well as news coverage of the topic, here.

As a faithful Catholic, mother of three and foster-mom-in-training, my affirmation of the dignity of the unborn is absolute. As a woman who has suffered life-threatening postpartum hemorrhages, whose body has been forever distorted by pregnancy and who endures the monthly discomfort of menstruation and the mental toll exacted at the end of my cycle when days tick by without sign of it—I urge Catholics to discuss abortion with respect for the bodily integrity of women.

Most Catholics do not need to be reminded to prioritize the dignity of the unborn in abortion discourse (though Catholics who want abortion to remain legal should emphasize this point more insistently). But there is a tendency among those who advocate for legal restrictions on abortion to focus exclusively on the rights of the unborn, failing to pay due deference to the involvement of women’s bodies—the physical reality of our being.

We cannot continue to talk about abortion as though a woman’s body is only accidentally related to fetal life—as though her uterus is no longer her own when it is nurturing a fetus.

Pregnancy transforms a woman’s body into one that supports another but nevertheless remains hers. This is often overlooked in pro-life political arguments, particularly when that discourse is male-dominated. Certainly, we should affirm the dignity of the unborn and acknowledge the bodily duo involved in pregnancy. But we cannot continue to talk about abortion as though a woman’s body is only accidentally related to fetal life—as though her uterus is no longer her own when it is nurturing a fetus—and we cannot continue to talk about pregnancy and abortion with such ferocity while viewing topics like menstruation as taboo.

Indeed, bodily integrity—the recognition that our bodies are our own, they matter, and we have the right to determine what or who gets access to them—is presented as the primary feature of the right to life in John XXIII’s encyclical “Pacem in Terris” (No. 11). This concept contributes important lines of thought to the discussion of abortion.

[Related: “Consistent-life-ethic Catholics can (and should) treat abortion as today’s preeminent priority,” by Charles C. Camosy and David McPherson]

Bertha Alvarez Manninen, for example, has noted that legal precedent in the United States suggests that for most citizens, the right to be free from state-mandated bodily intrusion is nearly inviolable (though this has been unequally applied across genders and races). Even in the case of parents whose (ex-utero) children need organs for survival, and even when a person is directly at fault for another’s life-threatening injuries (due to a car accident, for example), the law stops short of mandating the donation of organs to save a life. In our legal system, a person’s right to life does not necessarily override another person’s right to be free from unwanted bodily intrusion. For Dr. Manninen, “the right to an abortion is not about ﬂippantly ignoring the value of fetal life, but rather about stressing that no human being has the moral right to use another human being’s body against the latter’s will to sustain life.”

Christyne Neff concurs that once a woman determines she does not want to carry a pregnancy to term, “it becomes a pregnancy against her will and a significant bodily intrusion. This bodily intrusion is, in effect, state action to commission the womb for use as a fetal incubator.” Indeed, the body of a woman is overtaken during pregnancy: Organs are shoved and squished, weight gain stretches skin and wears on joints, constricted blood flow and fluid retention cause swelling—and these are the symptoms of an uncomplicated pregnancy. For many women it is much more injurious, leading to chronic physical ailments or death.

One need not affirm the conclusions of pro-choice bodily integrity proponents to appreciate the nuances this line of thinking invites us to grapple with.

The bodily integrity argument posits that legal prohibitions on abortion ignore these physical realities of pregnancy by bifurcating women from the activity of their reproductive organs, which subjugates the bodies of pregnant women in a way that legal precedent suggests is a violation of their rights.

We may object that the Catholic ethic of justice as right relationship means that our responsibilities to one another (including that of a mother to her unborn child) are a feature of human dignity, and there is a false sense of individualism and dualism at work in these arguments for legalized abortion. Indeed, it may be that bodily integrity is actually undermined by the obscuring of the biological function of sexual intercourse and the reproductive power of female bodies. But one need not affirm the conclusions of pro-choice bodily integrity proponents to appreciate the nuances this line of thinking invites us to grapple with.

[Related: “Pro-lifers expect sacrifices from pregnant women. Why do so many balk at the sacrifices of Covid-19 restrictions?” by Gloria Purvis]

This is not to say that legal proscriptions against abortion are never appropriate, nor that a woman should value her body over the life of her unborn child. What I am suggesting, rather, is that given the legal precedent around bodily integrity, it is worth considering whether moral persuasion may be a more suitable approach to affirming the dignity of women and the rights of the unborn. As I have noted elsewhere, “rational people committed to the same end can disagree” about how to deter abortion. And recognizing that legislation is not the only—nor the most effective—-means to reduce abortion can help us avoid what Pope Francis calls “the simplistic reductionism which sees only good or evil.”

There are myriad ways to address abortion that are more effective than legal prohibitions—and which do not impose burdens on pregnant women that the state avoids imposing on anyone else. If it is possible to reduce the occurrence of abortion while upholding women’s right to bodily integrity—and study after study after study shows that it is—then Catholics have a moral obligation to pursue those policy options with at least as much intensity as we pursue anti-abortion legislation. Otherwise, we wind up promoting the rights of one vulnerable set of persons at the expense of another’s.

At the very least, when Catholics discuss the legal aspects of abortion, we must reckon with the trade-off we inevitably make: Those who promote policies that curb the legal right to abortion should own, explicitly, that they are overriding a woman’s right to bodily integrity in favor of a fetus’s right to life, and they should avidly develop and support policies and institutional shifts that mitigate the gendered harms this entails. At the same time, those who reject restrictions on abortion should own their prioritization of women’s bodies over the right to life of the unborn. And abortion discourse and policy-making should always honor the voices and experiences of women, “in whose bodies,” Ms. Neff reminds us, “these dilemmas unfold.”

More from America on the abortion debate:

Kathleen Bonnette, Th.D., is an adjunct professor of theology at Georgetown University, the 2022 Imbesi Family St. Augustine Fellow at Villanova University’s Augustinian Institute and a home-schooling mother of three children.