No confusion about a new poll: Most U.S. Catholics disagree with church leaders on abortion and L.G.B.T. issues 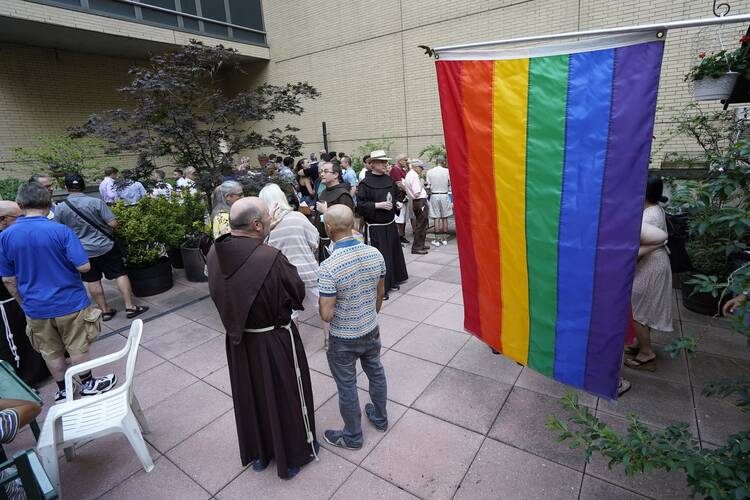 The danger of “confusion” over the church’s teaching on abortion is one reason Archbishop Salvatore Cordileone has given for his decision to ban Speaker of the House Nancy Pelosi from receiving Communion in her home diocese of San Francisco. As he told Gloria Purvis, the host of America Media’s “The Gloria Purvis Podcast,” “someone who is strongly advocating for something as evil as abortion and taking Communion creates confusion among people. And they can begin to think that it is acceptable for a Catholic to believe this.”

Last week saw the release of yet another poll suggesting that a majority of U.S. Catholics do indeed hold pro-choice views on abortion. But after years of “Communion wars” over abortion (which have dogged not only Ms. Pelosi, but also President Joseph R. Biden Jr.), what we have here is probably not confusion but indifference to, and even defiance of, church teaching. And a major challenge for church leaders is the possibility that many of the faithful see opposition to abortion as inseparable from a politically conservative agenda, including resistance to L.G.B.T. rights, that they do not share.

"...what we have here is probably not confusion but indifference to, and even defiance of, church teaching."

According to the poll released last week by The Associated Press-NORC Center for Public Affairs Research, 64 percent of U.S. Catholics (and 40 percent of Catholic Republicans) agreed that abortion should be legal in most or all cases, almost identical to the 65 percent of all adult Americans who held that view. Only 25 percent of evangelical Protestants held this view, putting Catholics closer to those with no religious affiliation at all (87 percent of whom said abortion should be legal in most or all case) than to their fellow Christians.

One explanation can be found in another result from the survey: 64 percent (yes, the same as the pro-choice number) of U.S. Catholics said the church has “not much” influence, or “none at all,” on their political views. This figure was 77 percent among Catholic Democrats and 73 percent among those who attend Mass less than once a month, but even many Catholic Republicans (52 percent) and more regular Massgoers (51 percent) claimed some separation between the church and their political views—maybe not an opaque wall, but more of a fence that the U.S. bishops have been able to see through but not scale. (The poll was taken between May 12 and May 16, after a draft Supreme Court opinion that would overturn Roe v. Wade was leaked, but before Archbishop Cordileone’s statements about denying Communion. It included 1,172 respondents, of whom 358 were Catholics.)

[Read next: “How do pollsters decide who’s a ‘devout’ Catholic?”]

As for the practice of withholding Communion as a way of teaching (or enforcing?) church doctrine, it was unpopular among Catholic respondents to the AP-NORC poll. Sixty-six percent of all Catholics (and 60 percent of Catholics who attended church at least monthly) said Communion should not be withheld from politicians who disagree with church teaching on abortion. The poll also found that 77 percent of U.S. Catholics said Communion should not be denied to someone who identifies as gay, lesbian, bisexual or transgender. That figure should not be surprising, as more than two-thirds of U.S. Catholics now support same-sex marriage (in opposition to church teaching), and Gallup has found that, over the past 20 years, support for same-sex marriage has consistently been stronger among Catholics than among the American population as a whole.

In fact, the fear that a Roe reversal may lead to other reversals of Supreme Court decisions—including those that guaranteed access to contraceptives, sexual privacy and marriage equality (a fear not prevalent among constitutional scholars)—may be a stumbling block for church leaders who want to assure parishioners that returning the issue of abortion to the states is an optimal outcome. In a CNN poll released in early May, a less-than-overwhelming 63 percent of U.S. adults agreed that “a woman’s right to use contraception” would be “secure” if Roe is overturned, and only 35 percent agreed that same-sex marriage would be secure. Reminders that U.S. bishops oppose laws mandating that health insurance plans cover contraceptives, consistently oppose same-sex marriage and criticize the L.G.B.T. community as being in thrall to “gender ideology” probably will not prompt pro-choice Catholics to reconsider their views.

Political scientists use the term Green Lanternism to describe the belief, held by many voters, that a political leader has superhero abilities to change public opinion, and this phenomenon may also apply to views of church leaders (and perhaps their views of themselves). If Catholics do not accept church teaching, this thinking goes, the bishops need to try harder—to play hardball, in political terms. But Green Lanternism has less credibility than ever in this age of impenetrable partisanship; there is a growing belief that a president can rally supporters but has little power to persuade voters to come around to his or her view, or even to get opponents to pay any attention. The U.S. bishops may simply not be able to overcome the political and ideological division that has affected not just the church, but also education, the arts and seemingly every facet of American life.