How do pollsters decide who’s a ‘devout’ Catholic? 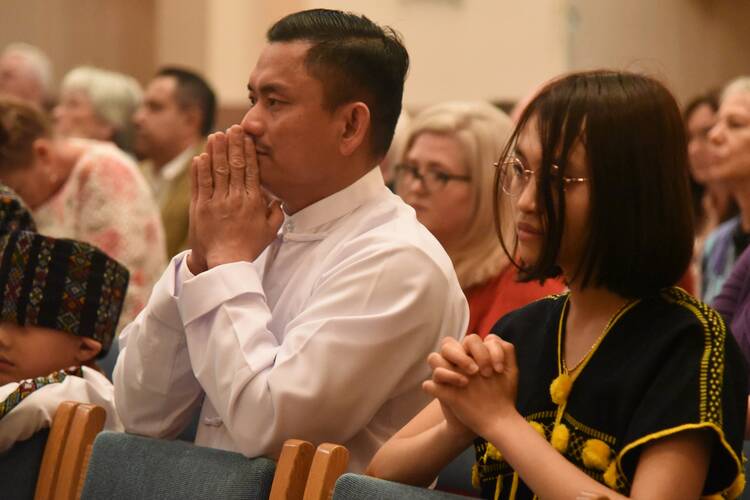 Stephen Aye and Theresa Soe, Burmese members of St. Mark the Evangelist Parish in Indianapolis, kneel in prayer during the April 12, 2022, chrism Mass at SS. Peter and Paul Cathedral in Indianapolis. (CNS photo/Sean Gallagher, The Criterion)

When America reported on polling data suggesting that most U.S. Catholics are “pro-choice” on the issue of abortion, a few readers objected that we were presenting them with a paradox. If someone is pro-choice, how can they be Catholic?

Resolving that question, I’m afraid, is beyond the pay grade of the pollsters at The Associated Press-NORC Center for Public Affairs Research, which conducted the survey and found that 64 percent of U.S. Catholics agreed abortion should be legal in most or all cases, almost identical to the 65 percent of all adult Americans who held that view. Besides, public opinion experts are fascinated when membership in a demographic group (like a religious affiliation or ethnicity) does not predict how everyone will answer questions—like when 18 percent of atheists say they believe in God or a higher power, or when 42 percent of U.S. Latinos say it is “very important” to increase security along the U.S.-Mexico border. You should not turn to pollsters (not respectable ones, anyway) if you want to downplay dissent in any group.

So how do pollsters know whether a respondent is Catholic? All they can do is ask.

So how do pollsters know whether a respondent is Catholic? All they can do is ask. The Pew Research Center explained this in a 2021 report on religious trends in the United States: “There are many different opinions about what makes someone Christian, Jewish, Muslim, Hindu or Buddhist. But no matter what anyone else thinks is correct, surveys typically rely on respondents’ self-identification to measure religious identity.”

If you think this honor system is too squishy for accurate reporting about a religion, don’t read what Pew says next: “If the same person says she is Christian in one survey and unaffiliated in another, it is not necessarily the case that she was honest in one and dishonest in the other; she may have a tenuous link to Christianity, and in some contexts she calls herself a Christian while in other contexts she does not—without even thinking about it.”

Not the most rigorous way to categorize people, is it?

Recognizing that there are differences between people of deep religious faith and those with a more tenuous connection to their church, pollsters often divide respondents by frequency of church attendance. In the case of Catholics, this usually means reporting different results for weekly Massgoers and those who attend Mass monthly or less often, and opposition to abortion is indeed higher among the former group. (When a pollster does not make this distinction, it may not be from disinterest: It costs more to get enough responses to report on differences among subgroups.)

But terminology can get tricky here. In 2002, Gallup released a report called “Reaction of Devout Catholics to Sexual Abuse Scandal,” in which it defined “devout” as “those who say they attended church in the past seven days.” This is not a universally accepted measure of devoutness or commitment to the faith, but more concerning, at least in retrospect, is that Gallup spun the results of its 2002 poll in a way that suggested devoutness meant denial: “the devout are less likely than the rest of self-identified Catholics to think the problem of abuse by priests is widespread…. The devout are somewhat more likely to say they would allow rehabilitated priests back into a parish.” (The numbers may have supported such a conclusion, but regular Massgoers may have also been more cautious in their responses to a crisis whose scope, at the time, was just beginning to come to light. A Pew survey in 2019 found that weekly Massgoers were more likely to report discussing the sexual abuse crisis with family and friends.)

By contrast, a Gallup report on views about abortion from last month avoided the “devout” label, instead calling Catholics who attend Mass weekly “more religious” than those who attend less often. There are surely some Catholics who disagree with this definition too, but are they outing themselves as less Catholic?

A Gallup report on views about abortion from last month avoided the “devout” label, instead calling Catholics who attend Mass weekly “more religious.”

Pew further muddies the waters by pointing out that Mass attendance, like Catholic identity, is purely self-reported in the world of public opinion, and there may be some white lies going on here: “when respondents in a telephone or face-to-face survey overstate how often they go to religious services, they may not be consciously telling a lie so much as projecting a self-image that is important to them. They may be saying, in effect, ‘I’m the kind of person who goes to church every week’ rather than, ‘Without fail, I actually go to church every single week.’”

The challenge in reporting on polls is that laypeople, so to speak, expect them to settle questions, but the pollsters themselves see them as raising new questions and opening up new areas for research. So we still debate what exactly is meant by “U.S. Catholics” or “the Catholic vote.” Does it mean the one-fifth of the population who call themselves Catholic? Or do we divide that number in half to count only regular Massgoers? Or divide it into one-third to count only those who agree with church teaching on abortion and L.G.B.T. issues? Someone should commission a poll on this—if they can figure out who gets to answer it.