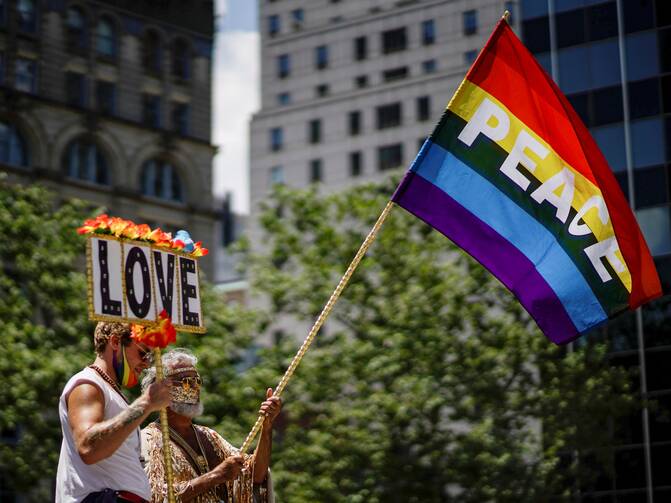 CLEVELAND (CNS) -- Pope Francis' expression of openness to the idea of laws recognizing civil unions, including for gay couples, to protect their rights does not change church teaching on marriage as being between one woman and one man, said several U.S. bishops and dioceses.

"His comments in no way signal a departure from the teaching of the Catholic Church concerning marriage or homosexuality," said Bishop David A. Zubik of Pittsburgh. "It speaks, rather, of a pastoral approach to these issues."

Other bishops said they were awaiting clarification from the pope on his comments that appear in a brief passage in the documentary film "Francesco."

And at least one bishop opposed church recognition of civil unions.

"The pope's statement clearly contradicts what has been long-standing teaching of the church about same-sex unions," Bishop Thomas J. Tobin of Providence, Rhode Island, said in a statement.

"The church cannot support the acceptance of objectively immoral relationships. Individuals with same-sex attraction are beloved children of God and must have their personal human rights and civil rights recognized and protected by law. However, the legalization of their civil unions, which seek to simulate holy matrimony, is not admissible," Bishop Tobin said Oct. 21.

Pope Francis' comments made headlines around the world, with some reports suggesting they reflected a change in church teaching and could lead the way to acceptance of same-sex marriage by the Catholic Church.

The pope's remarks are similar to the position he took while archbishop of Buenos Aires, Argentina, and echo remarks he has made in several interviews during his pontificate: "Marriage" is only between a man and a woman, but civil union laws could provide legal protection for couples in long-term, committed relationships.

The reaction outside of church ranks largely broke along ideological lines, with those opposed to same-sex marriage raising an alarm and those in favor of it applauding the pope, Archbishop Michael O. Jackels of Dubuque, Iowa, said in a statement posted on the archdiocesan website.

He suggested, however, that "much, too much is being made about" the pope's comment, saying it "really doesn't merit the response that either party is giving it."

He said, "This was not a magisterial moment, when the pope invoked his teaching authority."

“This was not a magisterial moment, when the pope invoked his teaching authority,” Archbishop Michael O. Jackels of Dubuque, Iowa, said.

The church teaches that marriage is a "permanent, faithful and fruitful union entered into freely by one man and one woman," the archbishop said. "Pope Francis has not and is not changing church teaching."

Archbishop Salvatore J. Cordileone of San Francisco said the topic of civil unions was discussed during the "ad limina" visit to the Vatican by bishops from California, Nevada and Hawaii in January.

"The Holy Father clearly differentiated between a civil arrangement, which accords mutual benefits to two people, and marriage. The former, (the pope) said, can in no way be equated to marriage, which remains unique," Archbishop Cordileone said in a statement.

"I would add that a civil union of this type (one which is not equated to marriage) should be as inclusive as possible, and not be restricted to two people of the same sex in a presumed sexual relationship," the archbishop continued. "There is no reason, for example, why a brother and a sister, both of whom are unmarried and support each other, should not have access to these kinds of benefits.

Archbishop Cordileone added, "The nature of marriage, the place of sex within a virtuous life, these great teachings of the church come to us from God, are illuminated by reason, and do not change."

Archbishop Cordileone: “The nature of marriage, the place of sex within a virtuous life, these great teachings of the church come to us from God, are illuminated by reason, and do not change.”

The pope's comments, as well as those of others who defend traditional marriage, show "openness to civil unions as a kind of middle way that would allow persons of the same sex in long-term relationships to have legal benefits without a civil definition of marriage itself," Archbishop Bernard A. Hebda of St. Paul and Minneapolis said in a statement.

Calling church teaching on marriage "clear and irreformable," Archbishop Hebda said "the conversation must continue about the best ways to reverence the dignity of those in same-sex relationships so that they are not subject to unjust discrimination."

"The pope seems to be emphasizing that we are called to find ways of extending a true sense of family to those who find themselves on the margins, so that they might experience the security of belonging and the joy of encountering the life-changing mercy of Jesus Christ," he said.

In calling on Pope Francis to clarify his comments, Bishop Robert J. McManus of Worcester, Massachusetts, acknowledged in a statement the pope "is not drawing a moral equivalence between same-sex marriage and civil unions."

"In life of the received teaching of the church on the morally problematic nature of civil unions, I look forward to further clarification from the Holy See," he said.

"The recent comments underscore the Holy Father's previous calls for pastoral and cultural sensitivity to the many different journeys of those who walk through life around us."

Bishop Donald J. Hying of Madison, Wisconsin, said in a statement posted on Twitter Oct. 22 that he, too, was awaiting clarification from the pope.

"Clearly church teachings on marriage and human sexuality, based on the natural law, remain unchanged and church doctrine is not developed through quotations from films," he said. "The universal truths, as beautifully articulated in the Catechism of the Catholic Church are just that, the same yesterday, today and until the end of time.

"Those teachings, as the Holy Father would rightly point out, are deeply loving and respectful to all of God's children," Bishop Hying added.

Bishop Michael F. Olson of Fort Worth, Texas, said the pope's remarks have led some people "to the erroneous conclusion that the church's teaching on marriage has changed or is about to change."

He said, "Faithful Catholics must insist that the church's teaching on marriage has not changed and cannot change."

“Faithful Catholics must insist that the church's teaching on marriage has not changed and cannot change,” Bishop Michael F. Olson of Fort Worth, Texas, said.

The teaching on marriage handed down by Jesus is a truth the church preaches and acts upon "regardless of the passing opinions of nations, states or cultures," Bishop Olson added.

"It is a misunderstanding of rights to suggest or infer that legal arrangements of civil societies can confer a status equivalent to marriage to couples who do not conform to God's intention and design for marriage," he said.

San Antonio Archbishop Gustavo Garcia-Siller agreed that the pope was not changing church teaching, but said he expected the church "will offer clarifying comments and speak more in-depth regarding his remarks in the documentary."

"The Holy Father remains daily in my prayers," he added.

Meanwhile, statements from the archdioceses of Denver, New Orleans and Philadelphia that were not attributed to any individual concurred the pope was not setting out on a path to change how the church looks at marriage.

"The short clip in the documentary does not have enough context to make any sort of conclusion on (the pope's) intentions, and certainly does not change the teachings in the Catechism of the Catholic Church," the Denver Archdiocese said.

Pope Francis' recognition of civil unions, said the New Orleans Archdiocese, "is his acknowledgment of the 'civil rights' of those in same-sex civil unions as provided by governments."

The Philadelphia Archdiocese said, "The recent comments underscore the Holy Father's previous calls for pastoral and cultural sensitivity to the many different journeys of those who walk through life around us."