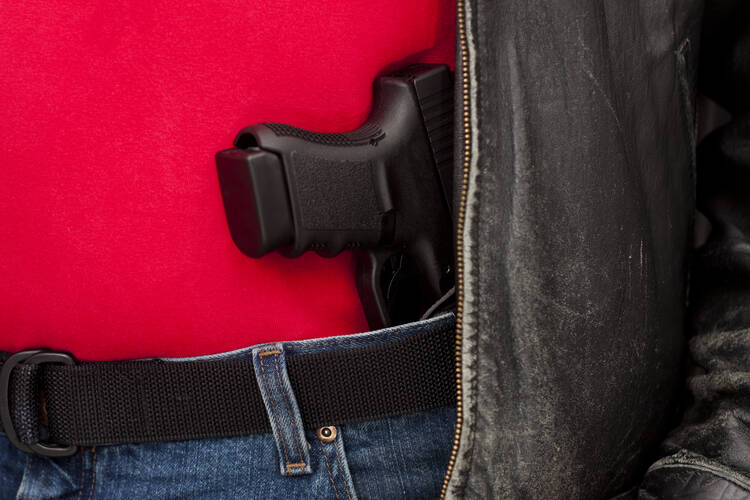 Few New Yorkers want to arm themselves to ride the subway, just as few teachers want to pack heat in the classroom.(iStock/RonBailey)

I live in Manhattan, so you can easily guess how I feel about guns: I don’t have any and don’t want to be near any. If you’re carrying one, I don’t care if you got a license for it. Just stay away from me.

This attitude is associated with Democratic “bubbles” (a New York Times website tool calculates that only 9 percent of my neighbors are Republicans), but the communication gap between urban and rural Americans may actually come from the lack of protective bubbles in big cities. Only the wealthiest in Manhattan can get everywhere by car or live in burglar-proofed single-family homes. Life here is inescapably porous, and you can’t always guard your personal space no matter how much firepower you have.

On the sidewalk, in the subway and even in your apartment if you don’t mind your window shades, you’re within sight of strangers, and your sanity depends on the belief that they don’t mean you harm. I realize that this sounds like a nightmare to most Americans; I hope they can realize that the nightmare for millions of their co-citizens would be to lose this way of life.

Life in a big city is inescapably porous, and you can’t always guard your personal space no matter how much firepower you have.

From a Manhattan perspective, it seems strange to respond to the massacre of 19 children and two teachers at an elementary school in Uvalde, Tex., by saying that our schools need to be in stronger bubbles, that they need to be “hardened” with more armed guards, more locked doors and a wider buffer zone from the outside world. Texas Lt. Gov. Dan Patrick said that the preferred response to school shootings is to “make it more difficult for a shooter to get into a school,” and Ted Cruz, the Republican senator for Texas, suggested that the problem with the Uvalde school was that it had too many entrances, ​​saying the ideal would be “one door that goes in and out of the school.” The “one door out” part was quickly deemed impractical because of fires, but in big cities, even the one-entrance solution could have students and teachers having to form lines around bustling blocks in the morning. There’s that porousness and vulnerability of urban life again.

A “campus” means something different in rural and urban areas. In a big city, schools (like churches) are generally not surrounded by gates or parking lots. They have doors that open onto public sidewalks, and larger institutions may have multiple buildings scattered throughout a crowded neighborhood. People are constantly walking past—or running or schlepping odd-shaped packages or stopping to stare at one of the school’s windows because an architectural detail caught their interest.

In order for the city to keep functioning, we assume that none of these people are carrying deadly weapons. And a lot of us are terrified that the Supreme Court is about to make that assumption a lot harder by striking down laws in states like New York and Massachusetts that restrict who can carry a concealed weapon in public.

A lot of us are terrified that the Supreme Court is about to strike down state laws that restrict who can carry a concealed weapon in public.

This has already been a bad year for the social compact of big cities, that we can trust each other not to take advantage of our spatial vulnerability. In New York, one man was shot and killed on a subway train by a stranger for no apparent reason, and just a couple of weeks earlier another gunman shot 10 people on a subway car. In another random attack in February, a woman died after being pushed onto the subway tracks in Times Square. In all three incidents, the attackers were temporarily able to evade capture by taking another train or simply exiting the subway system—easy to do because the whole point of the system is to quickly move people around with as many easy entrances and exits as possible. (The police eventually arrested suspects in all three cases. Surveillance cameras have, for good or bad, become one way for us to continue living together in tight spaces.)

I can assure Texans that very few New Yorkers want to arm themselves to ride the subway, just as few teachers want to pack heat in the classroom. We already see police everywhere in New York and are wary of seeing more, and we don’t want to be searched or interrogated every time we walk into a subway stop or public building. We don’t want the subway system or the public school system to shut down because people can no longer trust their fellow citizens. We just want fewer guns out there.

Rural and urban Americans have one thing in common: We both want to protect our way of life. Is it possible for both of us to do so?

Robert David Sullivan is a senior editor at America.