The only Trappist brewery in the U.S. is closing (and IPAs are to blame) 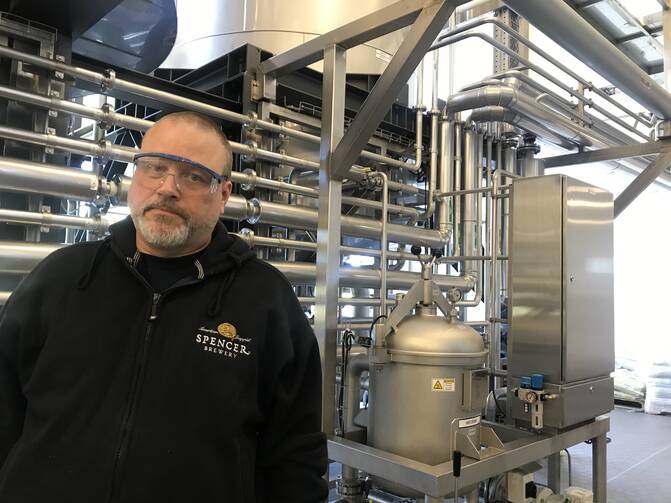 Michael Rzasa, a Trappist brother, was one of the workers at the Spencer Brewery. (John W. Miller)

Monasteries are holy places of quiet and contemplation, but even they can’t escape the tyranny of I.P.A.s.

This month, St. Joseph’s Abbey, located an hour west of Boston in the town of Spencer, announced it was closing America’s only Trappist-run brewery. Spencer Brewery has been unprofitable because its complex and dry Belgian-style beers have been unable to compete with the sweet, hoppy India pale ales, or I.P.A.s, that have raged through the U.S. beer market in the last decade like Mongol horsemen sacking their way through Asia.

“The beer industry has migrated toward hazy-style I.P.A.s with soft, citrus aromas,” said Andy Crouch, publisher of the magazine All About Beer. “It’s not a good time for Belgian-style monastic beers.” Of America’s 9,500 breweries, only a handful rely on Belgian-style beers, he said. “Spencer came along at the wrong time.”

“It’s not a good time for Belgian-style monastic beers. Spencer came along at the wrong time.”

In February, the St. Joseph’s community of around 45 monks admitted defeat at the hands of the I.P.A. hordes and voted to cease operations. At that moment, Isaac Keeley, O.C.S.O.—who had been running the brewery (and whom I profiled for America in 2019)—resigned because he couldn’t bear to dismantle what he had spent so many years building.

To wind down operations, the monastery appointed as his replacement William Dingwall, O.C.S.O., a 61-year-old monk from Toronto. “We tried really hard to make a go of it, but unfortunately it didn’t work out,” Father Dingwall told me. “But we’re not floored by it. We’re going to continue to pray and meditate.”

The last barrel has already been brewed. An auction of the equipment is expected to take place before the end of June. The monks hope that by the fall the brewery building will be empty and ready to harbor a different money-making business.

Like any family, St. Joseph’s needs revenue for housing, health care and food. They also allocate some of their funds to supporting local charities. A generation of monks followed the celebrated writer Thomas Merton into monasteries in the 1950s and 1960s, but as they age, there are fewer able-bodied monks left.

St. Joseph’s is studying its options. “We're quite imaginative,” said Father Dingwall. The abbey is leasing land for solar panels and looking into building natural cemeteries, where bodies decompose organically without metal caskets or embalming fluids. And it hopes to reopen its guest house, closed because of Covid-19, this coming winter.

Sources of income for the world’s 169 Trappist monasteries vary: They make coffee, fudge, fruitcakes, jams, bread and even clothes. One hot new idea, which has been picked up by New Melleray Abbey in Iowa, is coffins. “Trappist Caskets” has a nice ring.

Sources of income for the world’s 169 Trappist monasteries vary. One hot new idea, which has been picked up by New Melleray Abbey in Iowa, is coffins.

The abbey in Spencer, Mass., was founded in 1950 by a community that originally fled Europe after the French Revolution, finding refuge in Canada and then Rhode Island. St. Joseph’s is Trappist, meaning that it is part of the Order of Cistercians of the Strict Observance, which was founded in La Trappe, France in the 17th century. Members of Trappist communities obey the Rule of St. Benedict, commanding them to work and also to pray seven times a day.

In 2014, after years of discernment and preparation, including long study trips to Belgian monasteries, St. Joseph’s opened the brewery because its other businesses, such as making jellies and vestments for a declining population of Catholic priests, had suffered. “We saw ourselves as brewing in the Catholic tradition,” said Father Dingwall. “Belgium had the established brands, and that was the model we were following.”

There’s an assumption that brewing in European monasteries is an uninterrupted tradition hundreds of years old. That is not true. Belgian monasteries only started the breweries they operate today in the 20th century to rebuild monasteries ruined by the French Revolution and European wars. (It has helped that they had no rules against drinking—those are for Protestants.) Initially, their beer was mainly sold locally, but after World War II, sales across Europe took off.

Monks in other countries took notice, with Trappists opening breweries in the Netherlands (Zundert), Austria (Engelszell), England (Mount Saint Bernard) and Italy (Tre Fontane) to sustain their abbeys. After the demise of the operation at St. Joseph’s, there will only be 10 Trappist breweries left; the four above, five in Belgium and an additional one in the Netherlands.

“The Belgian monasteries only survive as breweries because they have big sales operations, and they’re tourist destinations.”

In Belgium, the main beer-making monasteries are still thriving because they have much bigger breweries run by laypeople as modern businesses, with on-site bars, restaurants and aggressive sales techniques. For example, the Orval Brewery produces over 100,000 barrels a year.

By comparison, Spencer failed to reach the mere 10,000 barrels per year it had aimed for. “The whole market changed on them,” said Mr. Crouch. “And even European breweries are now making American-style beers. The Belgian monasteries only survive as breweries because they have big sales operations, and they’re tourist destinations.”

The monks at St. Joseph’s never agreed to a tasting bar or restaurant on site, even if it might have popularized the brand. “The brewery is too close to the church to invite in outsiders,” said Father Dingwall, who also said they resisted turning the whole operation over to laypeople. “We wanted it to be a monastic business with monastic labor.”

Despite the closing, the brothers’ beer-making adventure is in many ways a spiritual victory. In the end, it defined them as men of prayer, not profit. They refused to make changes that might have compromised their identity, and they declined to chase the latest beer trends. They work to live, not live to work. Their reason for being has not changed. “The fact that we jumped into this new industry is a sign of a healthy, engaged community,” Father Dingwall told me.

The monks also know that God loves us even when our business fails, and that life, even in a monastery, is always a bit flawed. As Thomas Merton wrote, “The first and most elementary test of one’s call to religious life—whether as a Jesuit, Franciscan, Cistercian, or Carthusian—is the willingness to accept life in a community in which everybody is more or less imperfect.”

The St. Joseph’s monks know they can never fully escape the realities of the world. “We don’t pretend we’re living in the Middle Ages,” said Father Dingwall, speaking to me on his iPhone.

Editor’s note: An earlier version of this story stated that members of Trappist communities pray seven hours a day, rather than seven times a day.

[Also by John W. Miller: “Trump was never popular with young voters. So how did Marine Le Pen win over France’s youth?” and “Pope Francis says to cherish the elderly. Kane Tanaka, who recently died at age 119, shows us why we should.”]