Pope Francis says to cherish the elderly. Kane Tanaka, who recently died at age 119, shows us why we should. 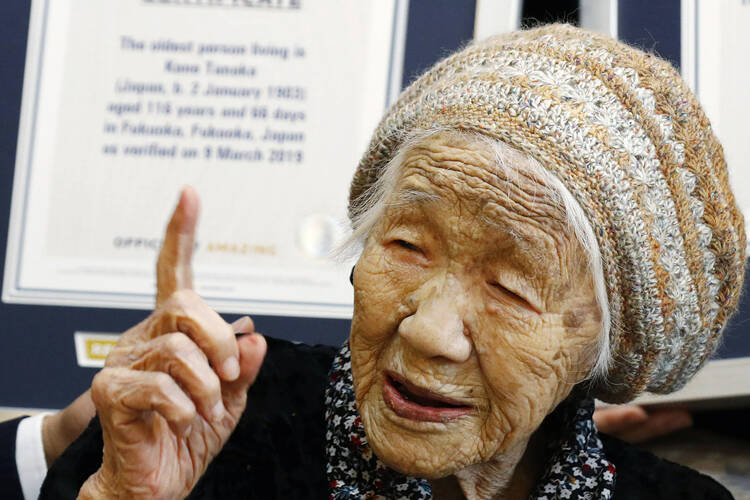 A familiar tenet of Catholic social thought is that we should care for the aging as part of our concern for the vulnerable. Pope Francis, affirming that value in a recent speech, added an element for our consideration: “Please cherish the elderly,” he said. “Because they are the presence of history.”

Kane Tanaka, a Japanese woman who held the title of the world’s longest-living person until she died in April at the age of 119, is an example of what Pope Francis was talking about. People with three digits to their counter can best connect us to history and can best be its presence.

By history, I mean the deep kind that structures our understanding of the world, supports our values, and explains why cities were developed, how basketball was invented and why we started slicing bread. The history that allows us to grasp how everything is connected and nothing happens all by itself. The history that encourages us to seek understanding and wisdom. The history we have been neglecting by merging our minds with fast-moving technologies. In that light, remembrance is precious. Spending time in the presence of history is precious.

People with three digits to their counter can best connect us to history and can best be its presence.

The presence of history granted by people who are very old offers an intimacy with people, places and forces that can feel remote but actually are not. Here is a thought experiment to explain what I mean.

First, let us define a 119-year span as one Tanaka, in honor of our recently departed champion. By that measure, the United States of America is only two Tanakas old, and it allowed people to enslave other people until 1.5 Tanakas ago. The age of basketball is a bit over one Tanaka. Columbus’s trip across the Atlantic to the Americas: 4.5 Tanakas. And the birth of Jesus Christ, a human miraculously ingrained with pure love, and an entanglement of man and God we have spent a couple millennia contemplating? A mere 17 Tanakas ago.

The contemplation of Ms. Tanaka’s life in the news, of course, focused on what life was like just one Tanaka ago. When Ms. Tanaka was born on Jan. 2, 1903, the Wright Brothers were 11 months from their first flight; Adolf Hitler was 13; women couldn’t vote in the United States; and the world’s population was approaching two billion.

The birth of Jesus Christ? A mere 17 Tanakas ago.

The particular circumstances of Ms. Tanaka’s life could not be replicated today. Her father was a farmer living in imperial Japan, and she was the seventh of nine children. Ms. Tanaka married her cousin, who owned a rice cake shop, when she was 19. They were married until he died at age 90 in 1993—after 71 years of marriage. They became Christians after the end of World War II, when she was 42 years old. Ms. Tanaka loved touring the United States, where she had relatives in Colorado and California.

It is hard when you meet somebody really old not to ask them how they got there. Ms. Tanaka’s recipe, served up regularly in the last few years to visiting journalists: chocolate and Coca-Cola. She also did math puzzles and played board games, especially Othello, and hated losing. She had a motto for her masses of growing fans: “Don’t give up and say there’s no point. Live with all your heart.”

In Japan, Ms. Tanaka grew increasingly famous, especially after she claimed the title of world’s oldest person in 2019. The organizers of Tokyo’s 2020 Olympic games picked her as a torchbearer, but she couldn’t participate for fear of a Covid-19 infection.

The oldest human alive, according to the Gerontology Research Group, is now a French woman named Lucile Randon. She was born in 1904. And she’s a nun—a member of the Daughters of Charity living in a nursing home in Toulon. In January 2021, she tested positive for Covid-19 but reportedly recovered without showing any symptoms of the disease.

Supercentenarians, defined as anybody who lives past 110, are rarer than you might think. At any one time, there are less than 200 verified supercentenarians in the world. They are true miracles, without any meaningful explanation of how they made it that far.

Supercentenarians, defined as anybody who lives past 110, are true miracles, without any meaningful explanation of how they made it that far.

“I’ve interviewed more supercentenarians than probably anyone else, trying to find out what they have in common,” L. Stephen Coles, co-founder of the Gerontology Research Group, told Smithsonian Magazine in 2014. “The answer is almost nothing.”

“Some drink and smoke, while others abstain from the partying lifestyle,” Rachel Nuwer, the author of the piece, reported. “Some are religious, others atheists; some have rich networks of family and friends, others are virtually on their own.”

And you have to get lucky. Ms. Tanaka survived paratyphoid fever and more than one bout with cancer. At 103, she agreed to have surgery for colorectal cancer and beat the disease.

The odds in Japan are better than elsewhere. Life expectancy in the country currently sits at 87.7 years for women and 81.6 years for men, one of the highest in the world and several years higher than in the United States.

But while centenarians tend to cluster in a few places with healthy diets, like Japan, “supercentenarians,” Ms. Nuwer wrote, “have no significant association with any particular geographic area.” This belies claims, made by some regions, that their standards of living create some sort of fountain of youth. Stalin’s regime in the Soviet Union liked to boast (implausibly) that the Caucasus, where their great leader was from, generated multiple people who lived past 140. (The yogurt maker Dannon even made commercials in the 1970s touting the longevity of yogurt-eaters in Georgia.)

Supercentenarians also remind us of life’s limits. Despite the best efforts of Silicon Valley dreamers and other techno-utopians, it doesn’t yet appear possible to live past 120. If ever near-death is a certainty, it is when you’re over 110. Every day is a gorgeous miracle. Maybe that is something else we can learn from the very old.

[Also by John W. Miller: “It’s time to bust up the Major League Baseball monopoly” and “Trump was never popular with young voters. So how did Marine Le Pen win over France’s youth?”]