As inflation spikes, ‘slum priests’ struggle to help the poor in Argentina 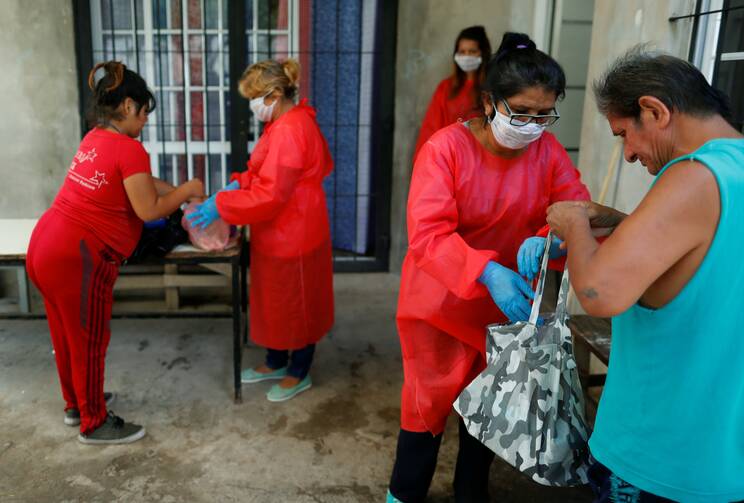 The residents of one of the largest slums in Buenos Aires, Villa 31, have been facing harder times over the past year. Life has never been easy for them, said César Sanabria, a local architect and community activist, but Argentina’s inflation—in 2021 it reached 51 percent—has made matters much worse.

In March, Argentina had a monthly rate of 6.7 percent, suggesting that economic conditions will not get any better in 2022. Food prices were especially affected, increasing 7.2 percent.

“To make things worse, unemployment is high in our neighborhood,” Mr. Sanabria said. “Most people work in temporary jobs, especially in the construction industry. After three or four months working, they become unemployed again.”

Many in Villa 31 have been trying to make a living in Argentina’s informal economy, typically as street vendors. Poverty is rising the most among these laborers in the nation’s gray market. They are not eligible for the social support that other working poor in Argentina can count on through the government or socially active labor unions, a vital support network established through Argentina’s Peronist movement.

“The people’s earnings are rather low,” Mr. Sanabria said. “A family needs to make at least 70,000 pesos each month [about $608], but that is totally impossible for the poorest in society.”

The economic misery has been intensifying other social maladies like drug addiction and violence, especially among young people in the villas, he said.

That is the context in which the curas villeros, or “slum priests,” of Buenos Aires operate. Villa 31 is one of the historical touchstones of that clerical movement. It was here that the martyred Rev. Carlos Mugica, one of the first curas villeros in Argentina, lived and worked.

Before he was shot to death in 1974 by members of a far-right death squad—“Triple A,” for Argentine Anticommunist Alliance—Father Mugica helped establish a model of community outreach and involvement that has typified the curas villeros phenomenon.

Many decades after his death, slum priests continue to play an important role in many villas in Buenos Aires, helping these marginalized communities organize for social services and reforms, creating comedores—“people’s restaurants,” where struggling community members can enjoy a free meal—and providing opportunities and support for the neighborhood children and people addicted to drugs, according to Mr. Sanabria.

Buenos Aires’ slum priests have been especially active during the most difficult months of the pandemic, providing help to large numbers of out-of-work heads of households and assisting the vaccination rollout.

Fortunato Mallimaci, a sociologist at the University of Buenos Aires, said the city’s slum priests have been especially active during the most difficult months of the Covid-19 pandemic, providing help to large numbers of out-of-work heads of households and assisting the government in the Covid-19 vaccination rollout.

“Former President Mauricio Macri’s neoliberal policies left thousands of people jobless and destroyed their community organizations,” Mr. Mallimaci charged. Those who are jobless in the informal economy, cut off from formal assistance, represent as much as 40 percent of the working class.

While the government distributes some financial assistance among the nation’s working poor, it is not enough to keep the people properly nourished, Mr. Mallimaci said—an irony here because “Argentina is a great exporter of meat, milk and grains”—basic foodstuff commodities. “The state is not powerful enough to properly regulate the handful of economic groups that control the food business,” Mr. Mallimachi said. So while food conglomerates achieve record exports, “the wealth generated by it is not kept in Argentina.”

Worse, without the proper government tax incentives, too much of Argentina’s bounty is directed to the export market, diminishing supply and leading to higher prices at home, Mr. Mallimaci said. “That has historically posed problems for the government. If those [commodities] are more heavily taxed, exports fall. If they are not taxed, people starve.”

Mr. Fernández recently announced an agreement with the International Monetary Fund to refinance a $45 billion debt borrowed in 2018 by former President Macri. Peronists have been criticizing the deal, primarily because they fear that the I.M.F.’s intrusion in the Argentinian economy could harm the distributive policies of the government. The renegotiated loan indeed includes new demands on Argentina including the reduction of energy subsidies, a commitment that will mean a deeper impact on the poor who will face higher energy and fuel costs.

While the government is being attacked from the left and the right, the people in the villas remain distant from the political disputes, struggling just to make ends meet.

While the government is being attacked from the left and the right, the people in the villas remain distant from the political disputes, struggling just to make ends meet.

“The curas villeros keep trying to help the people who do not have the means to react. People in the villas are not interested in party politics,” Mr. Mallimaci said.

Facundo Arriola, S.D.B., agreed. He has been living in a group of eight villas on the outskirts of Buenos Aires over the past few months. He said broader political debate about Argentine politics is not a regular feature of the lives of the people in the slums.

“People at times complain about politics and the government, but they know that they get more help from Peronists and end up voting for them in the elections,” he told America.

Father Arriola explained that many of the community organizations that are active in Buenos Aires villas emerge from the Peronist milieu. Peronist ideology, in which the state plays a central role in mediating conflicts between workers and companies and in providing social aid to the poor, remains Argentina’s defining political force, and contemporary Peronists retain their political and social networks and power, Father Arriola said.

In the slums of 17 de Marzo and Puerta de Hierro, which are some of the communities where Father Arriola works, some residents receive modest stipends from the government in order to work in comedores and community centers.

“The restaurants distribute about 2,000 meals every day. There are also work cooperatives, centers for drug addicts, and other alternative initiatives,” he said.

Another slum priest, the Rev. Lorenzo de Vedia, known as “Padre Toto,” has been working for several years in the Villa 21-24 de Barracas. He agreed that most villa residents remain distant from the nation’s political debates, an expression of a growing cynicism about the value of political engagement.

“It is not easy to politically organize the villas,” he said, noting that “ideological influxes” from social media and television have meant the “commitment to community is weaker now” among villa residents.

At the same time, there are longtime problems in the way labor and community organizations deal with the people, given that they at times “do not favor their autonomy and just say how things should be done,” Padre Toto said.

Economic misery has been intensifying other social maladies like drug addiction and violence, especially among young people in the villas.

“Decades ago, Evita Perón talked about the need to integrate the so-called descamisados [the “shirtless”—poor workers who identified with Peronism]. Now our challenge is to identify who are the current descamisados, how to accompany them and help them organize, so the state and the companies recognize their rights,” he said.

Padre Toto is not afraid of what he calls “internal criticism” of Peronism. “We need to criticize economic policies that do not prioritize domestic issues,” he said. “Otherwise, we will not promote deep transformations.”

That does not mean that the historical alliance between the common people and Peronism will be broken, Padre Toto said. “The people want economic growth in Argentina, but with income distribution. I am hopeful about that.”

The church has a fundamental role to play in that process, according to the Rev. Carlos Olivero, known as “Padre Charly.” After working for 18 years in another villa, he has spent the past year and a half in Villa Palito, where he is in charge of the San Roque González y Compañeros Mártires parish and assists in several community initiatives, including people’s restaurants, youth centers and kindergartens.

“Each new economic crisis provokes new social ruptures that cannot be automatically solved in times of prosperity. That is why social organizations and religious groups have been working with former inmates, drug addicts, and other segments among the poorest,” he said.

Pope Francis, Padre Charly believes, perhaps inspired by the social doctrines and reforms of the post-Vatican II era, has laid the groundwork for a wonderful update for the church in Argentina. “But unfortunately, many church groups do not listen to the pope’s message,” he said. “The church needs to help the seeds he has been planting to germinate. It needs to get closer to the poor.”