Catholic humanitarian groups are a ‘lifeline’ for Haitian migrants in Mexico 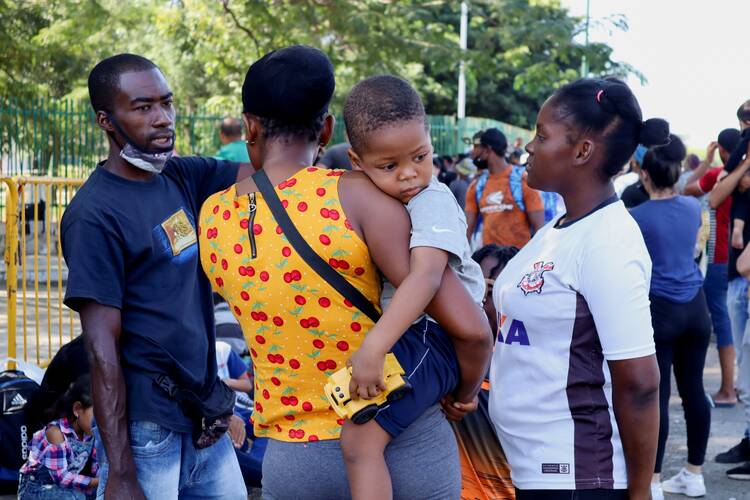 Haitian migrants line up as they wait for a QR code to register their migratory situation in Tapachula, Mexico, Dec. 29, 2021. The Diocese of Nuevo Laredo has issued and urgent appeal for assistance as hundreds of Haitian migrants arrive in the oft-violent city hoping to apply for asylum in the United States when Title 42 ends in May. (CNS photo/Jose Torres, Reuters)

Tapachula, a city in southern Mexico about an hour north of Guatemala, is one of the border zone’s biggest hubs for migrants and asylum seekers. Giulia McPherson, the director of advocacy and operations at Jesuit Refugee Service/USA, visited Tapachula in May with a JRS team to find out more about an ongoing crisis among Haitian migrants in Mexico.

Traditionally, Tapachula has played host to migrants from Central America’s Northern Triangle states, so Hondurans, Salvadorans and Guatemalans are regularly encountered there along with a sprinkling of other migrants from as nearby as Cuba or as far away as the Democratic Republic of Congo.

“But over the past year in particular, what we’ve been seeing is an increase in the number of Haitian migrants,” Ms. McPherson says.

The Haitian crisis has not vanished. It continues each day, even as other crises gathered more attention. “Haitians have been making their way north, trying to find a safer, more prosperous place” to work and live.

You may remember photos of U.S. Border Patrol on horseback pushing Haitian migrants gathered outside Del Rio, Texas, back into Mexico in September last year. Those photos caused a brief public outcry because of the rein-swinging, crowd-control tactics of the Border Patrol. Thousands of the Haitian migrants who had assembled under a highway overpass near Del Rio were quickly deported to Haiti, a nation many had not lived in for years; hundreds of others were accepted into the United States as asylum applicants, and the story and the images of desperate border crossings at Del Rio fell from the headlines.

But in the months since, the Haitian migrant crisis has not similarly vanished. It has continued each day, each week, each month since then, even as other crises gathered more attention. “Haitians have been making their way north, trying to find a safer, more prosperous place” to work and live, Ms. McPherson says. Hundreds are deported just about every month from the United States.

These Haitian migrants are not leaving Haiti for Mexico, Ms. McPherson explains. Most have left that troubled island state years ago, some as far back as the 2010 earthquake that devastated Haiti. They continue to trickle in each day from other nations into southern Mexico, escaping deep economic dislocation connected to the Covid-19 pandemic farther south in Brazil, Argentina, Chile and other South American states.

These nations had opened their doors to Haitians in the aftermath of the earthquake, tapping into a source of cheap, dependable labor. But as economic conditions deteriorate in South America, their former hosts have been pressing their Haitian guests to leave. Thousands, many with small children in tow, have been making their way north on foot, according to Ms. McPherson. It is a long and treacherous passage, especially in the notorious Darien Gap between Colombia and Panama, a 60-mile rainforest trail where they may fall prey to hunger, exhaustion, venomous snakes or members of the Gulf Clan, the drug cartel that controls the gap.

It is a long and treacherous passage, especially In the notorious Darien Gap, a 60-mile rainforest trail where migrants may fall prey to hunger, exhaustion, venomous snakes or members of the Gulf Clan.

Though the United States remains the dream destination of most migrants, after the Del Rio incident many have decided to seek asylum status in Mexico. They prefer not to chance deportation by the U.S. Border Patrol to a home country they no longer recognize. For many, the conditions they fled—unemployment, crime and gang violence, incompetent and corrupt government—have only grown worse since they left Haiti. Their children may also be more comfortable speaking Spanish or Portuguese than the Haitian Creole spoken by their parents. These South American born children would be completely lost in Haiti should they be “returned” there by U.S. officials.

Hundreds continue to be deported each month to Haiti. The International Organization for Migration reports that from Jan. 1, 2021, through Feb. 26, 2022, a total of 25,765 people were expelled or deported to Haiti. The United States returned 79 percent—20,309 people—of those deportees, while the Bahamas, Cuba, Turks and Caicos Islands, Mexico, and other countries returned the rest. Human Rights Watch officials say it is unconscionable for any state to return migrants to Haiti under its current lawless circumstances.

Returns to Haiti are life-threatening now, H.R.W. reports, “and will continue to be so, until security conditions in Haiti improve…. Haiti is experiencing a dire security situation, including loss of government control over strategic areas to the hands of dangerous armed gangs, widely believed to be financed by politicians and to have police officers on their payroll. Violence has worsened an already severe humanitarian crisis.”

The assumption that too many Americans make, Ms. McPherson argues, is that Haitians are economic migrants, “only” fleeing Haiti’s extreme poverty. “Unfortunately, once you interview families and individuals, what you learn is that they actually do have protection concerns, and it’s not just economic challenges that they’re facing.

The work of Jesuit Refugee Service and other Catholic humanitarian groups may be the only “lifeline” migrating people can depend on, “really saving people’s lives day in and day out.”

“All of the stories we heard from the Haitians that we spoke with yesterday [were] about violence that they experienced in Haiti,” she says. “Family members who were killed, threats that were made against their lives because of business dealings or just interactions with lawless, criminal gangs. Everyone has some kind of story to tell about the challenging, violent situation they experienced in Haiti.”

She emphasizes that while most Haitians will acknowledge they hope to find work and a better future in either Mexico or the United States, it is both the organized and the arbitrary criminal violence that has driven most Haitians out of their country. Just the day before Ms. McPherson spoke in Tapachula, in fact, gang warfare rocked Haiti’s capital of Port-au-Prince, dislocating more than 1,200 people and leaving 26 dead. That kind of violence means that Haitians have an asylum claim at least as legitimate as any of the Ukraine refugees currently being expedited into the United States under the Biden administration’s Uniting for Ukraine program. No one denies the necessity of quickly moving Ukrainians through the U.S. asylum process owing to the crisis in Europe, but Ms. McPherson points out that under international and U.S. law, the claims of these Haitian refugees from gang violence are just as valid.

“We shouldn’t discount their asylum claims. Every Haitian migrant should be given the opportunity to present their case for asylum so that it can be adjudicated either here in Mexico or in the U.S. fairly, and they should be given that opportunity, regardless of what our assumptions might be.”

Haitian migrants, Ms. McPherson says, are at the bottom of a hierarchy in terms of treatment of migrant groups in the Western Hemisphere, discriminated against and preyed upon at just about every juncture in their passage through South America; few border agents in South America or even humanitarian aid officials speak Haitian Creole. Children often have to translate for their elders.

Many of the migrant Haitian children have been out of school for as long as a year as their families journeyed north. The JRS team in Tapachula plan to jump-start those interrupted educations as much as it can while connecting the children and their parents with trauma specialists who will help them process the difficult, even life-threatening, odyssey they have experienced.

JRS, Ms. McPherson says, is also ready to help these migrants in Mexico through the asylum application process, and to provide food, housing and shelter, and other assistance to those who wish to continue their journey further north. That kind of support recently provoked criticism of Catholic Charities USA, accused by critics of participating in human trafficking because of its humanitarian work with migrants at the U.S. border.

But Ms. McPherson defends the humanitarian assistance as fulfilling the minimum requirements of international agreements on the care of migrating people and asylum seekers. And U.S. Catholics, she says, are held to higher biblical and moral standards of accountability for the protection and assistance of people fleeing violence and hunger. “I think it aligns with Catholic social teaching broadly that we have to welcome the stranger and give them every opportunity not only for basic humanitarian assistance…but to treat them like our brothers and sisters and to make sure that they are afforded the opportunity for protection and to petition for asylum wherever they might be.”

She describes the work of JRS and other Catholic humanitarian groups with and for migrants as sometimes the only “lifeline” migrating people can depend on. Those efforts, “both here, of course, and in the U.S….are really saving people’s lives day in and day out.”