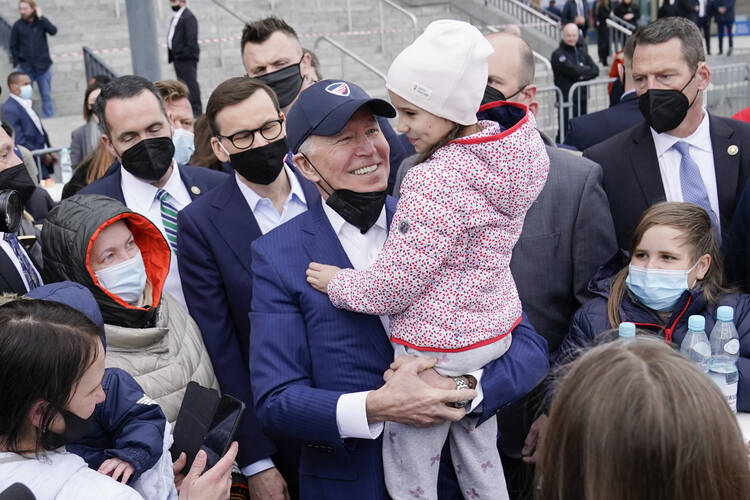 It appears that not all asylum seekers are created equal in the eyes of many Americans. First the good news: The Biden administration took a major step forward in welcoming Ukrainian refugees last week. The Uniting for Ukraine initiative will provide Ukrainians fleeing the war in their country a streamlined pathway to come to the United States.

There is nearly universal support for welcoming Ukrainians in the United States (just check the preponderance of Ukrainian flags on Twitter), and it is laudable that the administration took this step. The global community has been horrified by the bloodbath in Ukraine. According to reports, Russian soldiers have raped dozens of women, many of whom did not survive. Russian forces are suspected to have executed thousands of Ukrainians and buried them in mass graves outside Mariupol.

Yet, as leaders of the U.S. Conference of Catholic Bishops have noted, Uniting for Ukraine does not include a path to legal status or authorization for basic services. They also note that, in a perplexing wrinkle to the program, Ukrainians seeking asylum at the U.S.-Mexico border were turned away after April 25.

Being from Latin America, I cannot help but see the stark contrast between how this country is now treating Ukrainian refugees and how it treats Latin Americans.

Saving Ukrainians must be a priority. Frankly, defending human life should be a priority. Period. I hope this is just the beginning of the United States stepping up to help. But, being from Latin America, I cannot help but see the stark contrast between how this country is now treating Ukrainian refugees and how it treats Latin Americans, who have been fleeing rape and violence for decades.

Why are Americans so numb to the suffering of the poor and marginalized in our own hemisphere?

A few years ago, Selena Guadalupe Valladares told me why she fled El Salvador. When she was 14, members of local gangs started talking to her and telling her they were in love with her. One gang member asked another girl she knew to be his girlfriend. When that girl refused, gang members kidnapped her, raped and killed her, and spread her body parts around a field of mango trees, Ms. Valladares told me.

Coming to the United States was the only way she could save herself.

Why are Americans so numb to the suffering of the poor and marginalized in our own hemisphere?

I will never forget meeting a man in Nuevo Laredo, a Mexican border town just south of Texas. He fled El Salvador because he had the audacity to report gang activity to the police. His son had disappeared, and he looked for him for years. He assumed he was dead. The man told me he had video of gang members discarding body parts into a well and shared it with the local authorities. After he made his report, the police official asked him: “You know this means you have to leave the country? They will come after you.” The corruption there is deep.

When he and his family fled to Mexico, the gang found them there. So they headed to the U.S.-Mexico border, where I met them. I have no idea if they made it into the United States.

Why do we treat people from Ukraine and people from Latin America so differently? Is it because we do not have a singular person to blame for the ongoing rape, murder and torture? Do we not consider gangs “unjust aggressors”?

Do Americans care about Ukrainians because they recognize them as victims of Vladimir Putin? Do Americans need a “big baddie” to hate before we take action on behalf of the poor and persecuted?

In other words, do Americans care about Ukrainians because they recognize them as victims of Vladimir Putin? Do Americans need a “big baddie” to hate before we take action on behalf of the poor and persecuted?

We certainly seemed more outraged at how the nation treats Latin American asylum seekers when we had Donald J. Trump to blame. Or at least we pretended to be outraged. Are we really giving a pass to the Biden administration’s meager efforts to improve the immigration system because, “Well, at least he’s better than Trump”? It took the Biden administration over a year to even attempt to cancel Title 42, a Trump-era measure that restricted asylum on the U.S.-Mexico border, ostensibly to prevent the spread of Covid-19. (It was meant to end this in May, but the measure’s termination is currently being blocked in court.)

A year might not seem like a long time for some, but just think about what it has been like for these families stuck on the border, most of them in a foreign land. These are real people, too, and their suffering is as real as Ukrainian suffering.

Perhaps we are more welcoming of Ukranians because they are white. Do most Americans, deep down in their psyche, believe what Mr. Trump said about people from “shithole” countries? Does that shoe fit?

Americans are acting as if the lives of white Ukrainians are more valuable than the lives of brown Latin Americans. And that is unacceptable.

Saying that most Americans are racist is likely a premature and perhaps overly generalized explanation. Yet we can certainly note how the media coverage of the Ukrainian conflict has been a steady stream compared to the patchy reports of violence in Latin America. That is no surprise: Ratings are ratings, after all. Ukraine is a compelling David versus Goliath story, featuring America’s old Cold War foe. What’s more, the outbreak of nuclear war, which may be an unlikely threat, nevertheless would impact every human being on Earth.

So maybe it’s a combination of factors: Mr. Putin and Russia as identifiable foes, the onslaught of pro-Ukraine media coverage, the threat of nuclear fallout and, yes, race.

None of this is meant to take away from the suffering in Ukraine. We must fulfill and go beyond the promises of “Uniting for Ukraine.” Furthermore, we must, as the editors of America recently argued, demand that Congress pass the Afghan Adjustment Act, which would grant a more permanent legal status to refugees from Afghanistan following the U.S. withdrawal from that country last year.

But our increasingly generous response to the plight of Ukrainans does raise the question: Why are Americans so quick to forget, or perhaps ignore, the dire poverty, horrific violence and rape of children in Latin America?

Count me among those who believe it is paramount to address the root causes of migration. Most people I have interviewed tell me they would have preferred to stay in their home country but felt forced to leave. But addressing root causes takes time and commitments from wealthier nations to help. In the meantime, Americans are acting as if the lives of white Ukrainians are more valuable than the lives of brown Latin Americans. And that is unacceptable.

[Read next: The church in Eastern Europe has a chance to improve its record on refugees]