Better than Trump but ‘too slow to deliver change.’ Biden’s immigration record one year in 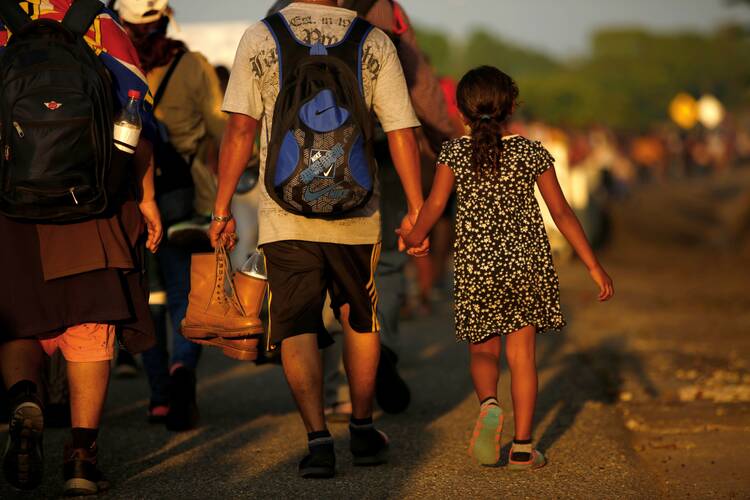 Jose Francisco from Honduras leads his 8-year-old daughter, Zuabelin, by the hand on Nov. 22, 2021, as they take part in a caravan near Villa Mapastepec, Mexico, headed to the U.S. border. (CNS photo/Jose Luis Gonzalez, Reuters)

One of President Trump’s best-known campaign promises from 2016 was that he would build “a big, beautiful wall” along the southern border of the United States and that he would “have Mexico pay” for it. When he announced that he was running for president in 2015, Mr. Trump also said immigrants illegally crossing the border were “bringing drugs. They’re bringing crime. They’re rapists. And some, I assume, are good people.”

This was not mere campaign rhetoric; such sentiments guided policy when Mr. Trump became president. For example, despite widespread support for granting legal status to undocumented immigrants who arrived in this country as children, the Trump administration attempted to cancel Deferred Action for Childhood Arrivals, an Obama-era policy that protected these individuals from deportation. His administration also enacted a zero-tolerance policy on unauthorized border crossings, which led to the separation of thousands of migrant children from their parents. In total, the Trump administration enacted hundreds of immigration policy changes.

From an immigrant advocate’s point of view, President Biden had a lot to do when he took office a year ago.

So from an immigrant advocate’s point of view, President Biden had a lot to do when he took office a year ago. But while acknowledging that rolling back Mr. Trump's policies and finally enacting comprehensive immigration reform would take years, many had hoped the administration would have done more by this point.

What exactly has Mr. Biden done? On his first day in office, he introduced the U.S. Citizenship Act of 2021, an immigration reform bill that would establish a path to citizenship for undocumented immigrants and begin to address the “root causes of immigration.” The law would require the State Department to promote a strategy that addresses “the flight of families, unaccompanied noncitizen children, and other individuals from Central America to the United States.” That strategy would include financial assistance to Central American nations aimed at fighting corruption, strengthening civil police forces and confronting criminal violence. The bill was referred to the House Subcommittee on Immigration and Citizenship in April but has yet to receive a vote.

In his first few weeks in office, Mr. Biden also signed numerous executive orders related to immigration. Many of these reversed President Trump’s anti-immigrant measures; for example, one order restored the inclusion of noncitizens in the official U.S. Census count. He signed orders strengthening DACA, addressing the reunification of families separated at the U.S.-Mexico border and revising deportation priorities.

While his major immigration reform package seems stalled in Congress, Mr. Biden has moved, with varying speeds, on many specific policies:

“Remain in Mexico” policy. For at least six months, Mr. Biden ended the controversial Migrant Protections Protocol, which had left thousands of migrants seeking U.S. asylum waiting in Mexico for hearings. But in August, a federal judge restored M.P.P., saying that the administration did not follow proper procedures in changing federal policy.

Immigration advocates worked closely with the administration on the rollback of M.P.P.

“We brought back vulnerable asylum seekers who had been put into that program,” according to Dylan Corbett, executive director of the Hope Border Institute. “And we demonstrated that we could bring them back safely, even during a time of pandemic.”

While acknowledging it will take years to reverse President Trump's policies and finally move toward immigration reform, many hoped the Biden administration would have done more by this point.

The rollback was a collaborative effort with nongovernment organizations, local governments, partners in Mexico and the Biden administration—a success story that Mr. Corbett feels did not receive enough attention.

Under M.P.P., U.S. Customs and Border Protection agents had returned more than 70,000 asylum seekers to Mexico to await their day in court. Last year, the administration brought in 13,000 of those asylum applicants to have their cases heard in the United States. That was before the courts reimposed M.P.P.; the administration has petitioned the Supreme Court to allow it to end the program for good, but a decision is not expected before June.

“What people are angry about is that they’ve expanded the program in many ways,” said Don Kerwin, executive director of the Center for Migration Studies in New York. For example, in December, when the Biden administration reimplemented M.P.P., it also expanded it to include asylum seekers from non-Spanish speaking countries like Haiti.

Covid-19 border restrictions. Mr. Biden has not even tried to end Title 42, a health restriction Border Patrol agents have used to summarily expel immigrants at the border. “It’s the worst attack on the asylum system that we've had in 40 years—since the creation of the Refugee Act of 1980,” Mr. Kerwin said of the measure, which was put into place by the Trump administration when the Covid-19 pandemic began.

Numerous public health experts have testified that there is no need for Title 42 restrictions, but according to Mr. Kerwin, more than a million people have been expelled from the United States because of it. “It’s kind of an extraordinary failure of the Biden administration that they haven't revoked this order,” he said.

Mr. Biden has not even tried to end Title 42, a health restriction Border Patrol agents have used to summarily expel immigrants at the border.

Advocates had hoped that a successful rollback of M.P.P. would prove to the administration that Title 42 could also be ended, Mr. Corbett said. But it has become increasingly clear that it will stay in place.

“Someone who is unvaccinated and someone who is Covid-positive can pass through the border with no questions asked as long as they have the right piece of paper,” he said. “But an asylum seeker, a vulnerable woman, a vulnerable family in grave need, who should have the right under our law and under international law, to petition for asylum at the border, who are fully vaccinated and tested Covid-negative, will be turned away. It’s politics and it’s just not right.”

Family separations. Mr. Corbett was also critical of how the Biden administration is dealing with families who had been separated at the border. “At the beginning of the year, they put together a really powerful mechanism for restorative justice,” he said. “And now…they’re treating them as adversaries.”

In November, reports surfaced that the administration had been considering compensating families separated at the border with as much as $450,000 each. While characterizing that figure as “higher than anywhere that a settlement can land,” Deputy Press Secretary Karine Jean-Pierre did say that Mr. Biden would be “perfectly comfortable” settling with families with pending litigation against the United States.

“At the beginning of the year, they put together a really powerful mechanism for restorative justice. And now…they’re treating [separated families] as adversaries.”

Yet earlier this month, The Washington Post reported that the Justice Department now maintains that families separated at the border are not legally entitled to compensation.

“At issue in this case is whether adults who entered the country without authorization can challenge the federal government’s enforcement of federal immigration laws” under federal tort claims laws, the Justice Department argued in a January brief related to a Pennsylvania lawsuit, according to the report. “They cannot.”

Mr. Corbett sees mixed messages from the administration on these issues, undercutting the ambitious agenda Mr. Biden set forth in his campaign and in his first few months in office. In a year with midterm elections, he fears, little will be done toward immigration reform.

“I don’t want to be overly pessimistic,” Mr. Corbett said. “[But] we need action at the border to restore asylum. We need to continue to push hard that we’re making fundamental changes in Central America to address the drivers of immigration. We need to protect Dreamers. We need to protect essential workers and those who are contributing to our resilience during the pandemic.”

The toxic political climate makes legislative action unlikely. For example, both Mr. Kerwin and Mr. Corbett took issue with the political controversy over the “record-breaking” 1.7 million border “encounters” in the Southwest reported by the Border Patrol from October 2020 through September 2021. To begin with, Mr. Kerwin said, hundreds of thousands of those apprehensions are likely of the same person crossing the border multiple times. And he does not believe that the number of people coming across the border will lead to a higher number of undocumented immigrants in the United States because programs are still in place to fast-track deportations and expulsions.

“The numbers are inflated, and [Customs and Border Protection officials] and the political right use those numbers to show we have unprecedented crossings,” Mr. Corbett said. “It’s simply a function of…people crossing over and over again,” in part because they are frequently expelled through Covid restrictions.

Progress on other immigration issues will simply require more time. While the Biden administration set a ceiling of 62,500 refugees to be admitted to the United States in the 2021 fiscal year, only 11,411 were allowed in. That is the lowest number since the refugee program began in 1980. Mr. Kerwin attributes that in part to the Trump administration “decimating and sabotaging” the immigration infrastructure. Mr. Biden has already set the ceiling to 125,000 for 2022.

“The president and the administration overall last year have been too slow to deliver change, and now they risk being caught in the crosshairs of politics,” Mr. Corbett said. “The political currents seem to be fighting against us. We need reason for hope. I think it’s important to recognize [Mr. Biden] set aspirational goals with an ambitious agenda. There was a lot to rebuild.”