Biden promised to let in 100,000 Ukrainian refugees. But the administration isn’t prepared to meet that goal. 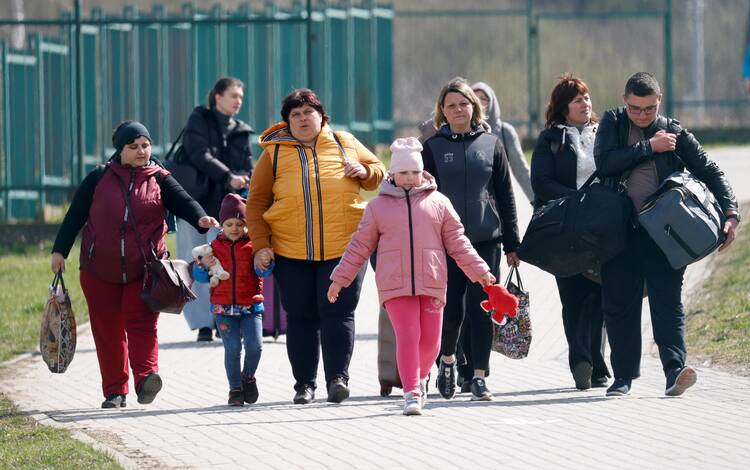 Ukrainian refugees walk after crossing the Ukraine-Poland border in Medyka, Poland, April 12, 2022, after fleeing the Russian war. In Poland, the ecumenical L'Arche community in Wroclaw, are helping Ukrainian refugees, including those with developmental disabilities. (CNS photo/Leonhard Foeger, Reuters)

On March 24, President Joe Biden announced that the United States would admit “up to 100,000 Ukrainians and others fleeing Russia’s aggression.” While that figure represents less than 2 percent of the Ukrainians who have fled their home country as of this writing, not to mention the many more who are internally displaced, it is a welcome beginning. Images of innocent men, women and children massacred by occupying Russian soldiers have shocked the conscience of the world. Even before the revelation of these latest atrocities, more than two-thirds of Americans surveyed favored accepting Ukrainian refugees.

But the key phrase in Mr. Biden’s announcement is “up to.” One hundred thousand is a ceiling, not a floor, and unfortunately, this administration does not seem to have the personnel or systems in place to make reaching even that cap a reality.

A look at the president’s track record on refugees to date does not inspire confidence. After securing the presidency, Mr. Biden promised to raise the refugee cap from President Trump’s historically low 15,000 to 125,000 for fiscal year 2021. But upon taking office, he initially kept the previous administration’s cap, raising it to only 62,500 in May 2021 under intense pressure from refugee advocates. The administration admitted that reaching that goal was unlikely, and indeed fewer than 12,000 refugees (18 percent of the target) were resettled that year. The cap for 2022 was set at the promised 125,000, but only 8,000 refugees have been admitted in the first half of the fiscal year.

The administration has blamed its failure to settle more refugees on Mr. Trump, and it is true that under his administration, immigration budgets were cut, staff were laid off, positions were left unfilled and the vetting process for applicants was made more onerous. But these realities were known to the administration, and criticizing Mr. Trump’s decimation of the resettlement process is no substitute for formulating a plan and dedicating the resources to implement it.

"Criticizing Mr. Trump’s decimation of the resettlement process is no substitute for formulating a plan and dedicating the resources to implement it."

The evacuation effort following the United States’ exit from Afghanistan provides lessons as the administration works to fulfill its promise to the Ukrainian people. That initial evacuation, though disastrously executed, at least got tens of thousands of Afghans, many of whom risked their lives by collaborating with the United States, out of harm’s way. In the weeks after the withdrawal, 75,000 Afghans resettled in the United States, most through the humanitarian parole process. But humanitarian parole is a temporary status and does not provide a pathway to permanent legal status or citizenship. Unless the White House and Congress pass the Afghan Adjustment Act, which would grant a more permanent legal status to parolees, thousands of Afghans will have to apply through normal asylum and immigration channels that already have over a million backlogged cases—or face deportation when their Temporary Protected Status ends.

Meanwhile, Afghan allies and their families who were unable to catch one of those final flights out of Kabul are now living in hiding under the Taliban regime or without legal status in other countries while they wait for their applications for humanitarian parole to be processed. The U.S. Citizenship and Immigration Services agency has processed fewer than 2,000 of the 43,000 applications it has received from Afghans since July; The New York Times reports that as of Feb. 11, 1,500 have been denied and 170 approved.

The Times also gives a human face to those numbers. Sharif Azizi, an Afghan interpreter who served with U.S. Special Forces, was brought to the United States in 2017 because his life was threatened by Taliban insurgents. After the fall of Kabul, the Taliban came looking for his mother and siblings, who had been issued exit passes by the U.S. military to board the evacuation flights but could not make it through the gates. They fled to Pakistan, and after months of waiting for a decision on their application, they learned they had been denied with no explanation—despite personal advocacy for their case by a retired Marine and a U.S. senator.

If this is the process faced by those who worked alongside U.S. soldiers in Afghanistan, do we believe the United States is ready to admit tens of thousands of Ukrainians when it can still make a difference?

When the Refugee Resettlement Program started in 1980, 207,000 refugees were admitted. There is no practical reason that with current technology we cannot match or exceed that number.

President Biden has an opportunity in this crisis. The American people want to help Ukrainians threatened by Vladimir Putin’s vicious war.

What will it take to get there?

First, Congress should accept the Biden administration’s proposal to hire thousands of U.S.C.I.S. staff and overhaul its funding system, which primarily relies on fees from applicants. According to J.C. Hendrickson of the International Rescue Committee, security vetting is the major bottleneck in the process. There is no way to work through the millions of backlogged cases while maintaining the level of scrutiny each application receives other than by significantly increasing the number of people processing those applications.

Second, the administration should expedite the application process for Ukrainians. In a letter to Mr. Biden, several members of Congress have proposed immediately accepting Ukrainians with pending visa applications who have family in the United States, as well as pending applications under the Lautenberg program for religious minorities with a parent, sibling or child in the United States; eliminating the 120-day wait time for student visas; and allowing Ukrainians to temporarily use the Electronic System for Travel Authorization, an automated vetting system that can give travel approval in just 72 hours.

These are quick fixes, and surely the administration is considering others. But to handle migration and refugee flows that are expected to rise sharply in the decades to come because of climate change, the United States must not only get its own house in order but support and lead global efforts to create an equitable system for refugee placement. Signing the U.N. Global Compact on Refugees would be a good place to start.

The Biden administration has been vocal and effective in its support for the Ukrainian fight against an unjust aggressor. The United States has allocated $13.6 billion in military and humanitarian aid for Ukraine, and Mr. Biden announced in March another $500 million in direct budgetary aid for Volodymyr Zelensky’s government. There is no doubt that the White House and Congress care deeply about the plight of the Ukrainian people.

If the United States is not able to welcome as many Ukrainians as we set out to, Mr. Biden is not solely responsible for our failure. This country’s long-broken immigration system all but guarantees a perpetual crisis at the U.S.-Mexico border, which overwhelms the asylum system and saps the political will to admit other refugees. But the president has an opportunity in this crisis. The American people want to help Ukrainians threatened by Vladimir Putin’s vicious war; they want to fulfill our obligations to Afghan men and women who stood up to the Taliban. There is bipartisan support in Congress and among governors for investing in resettlement efforts. But for that to happen, we cannot mistake good intentions for an actual plan, and cannot simply cheer an announcement and then move on.