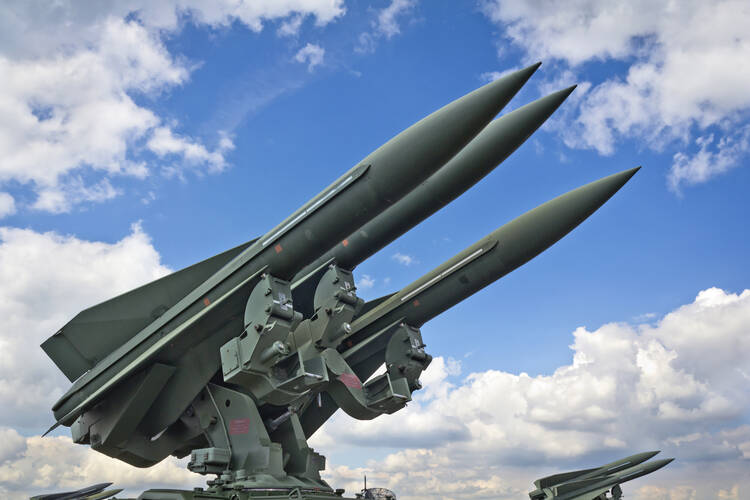 For Christians and all those who try to adhere to a philosophy of loving enemies as well as friends, the weapons industry is one of those devils hiding in plain sight in our industrial sector, in the middle of the same supply chains that get us our laptops, Playstations and hybrid cars.

And when war erupts, that industry benefits from the fears that motivate politicians to budget more money for the military, and investors to sink more capital into armaments. In the week after Russia invaded Ukraine, the stock prices of companies that make instruments of war—from guns and fighter jets to tanks and bulldozers, with names like Northrop Grumman, Lockheed Martin, Raytheon and Boeing—rose significantly.

In the week after Russia invaded Ukraine, the stock prices of companies that make instruments of war rose significantly.

The corporate defense industry is us, or at least it is U.S. taxpayers. It is receiving $768 billion, or over 10 percent of the federal budget, in 2022. The United States spends far more than any other nation on its military, and it also exports tens of billions worth of weapons a year, prompting Pope Francis, in his 2015 speech to Congress, to say that it was time “to stop the arms trade.” It persisted, he noted, because of “money: money that is drenched in blood, often innocent blood.”

Among the many repercussions of the Russian invasion of Ukraine is a proliferation of governments spending money on guns. Germany, which had been committed to pacifism since World War II, declared that it had decided to spend over 100 billion euros ($112.7 billion) on its military. It will also provide Ukraine with anti-aircraft missiles, tank-busting rockets and other weapons, said Chancellor Olaf Scholz. “It is our duty to support Ukraine to the best of our ability in defending against Putin’s invading army,” said Mr. Scholz. “That is why we are delivering 1,000 antitank weapons and 500 Stinger missiles to our friends in Ukraine.”

Among the many repercussions of the Russian invasion of Ukraine is a proliferation of governments spending money on guns.

Apart from its individual members, the European Union, which has long trumpeted its “soft power,” is also spending hundreds of millions of dollars to buy weapons for Ukrainian forces. And the Biden administration has demanded that Congress fund $6.4 billion as part of an aid package to Ukraine that includes “security assistance.”

A book titled The Shadow World: Inside the Global Arms Trade probes the global weapons industry, estimated at over $2 trillion a year. The author, Andrew Feinstein, a former South African member of parliament, describes how the world goes through pendulum swings in the making of weapons.

After the horrors of World War I, for example, British Prime Minister Lloyd George declared that the world “must eliminate the idea of profit of great and powerful interests in the manufacture of armaments.” And U.S. President Woodrow Wilson argued for the inclusion of the following statement in the Covenant of the League of Nations: “The manufacture by private enterprise of munitions and implements of war is open to grave objections.”

A subsequent report, written in 1921 by an international disarmament commission, accused arms companies of “fomenting war scares, bribing government officials, disseminating false reports concerning the military programs of countries and organizing international armaments rings to accentuate the arms race by playing one country off against another.”

But as Mr. Feinstein’s book describes, this clear-eyed look always gives way to a new cycle of weapons manufacturing when a society is confronted with a menace and becomes fearful. It happened in the 1930s with Adolf Hitler’s rise and the production of tanks, artillery and other weapons for Germany by the Krupp company, triggering rearmament in the United Kingdom.

A billion dollars spent on educational services would create 17,687 jobs, compared with 12,883 jobs for the same expenditure on health care and 8,555 jobs for equivalent defense spending.

Then World War II created, in the United States, the greatest weapons industry the world has ever seen. As The Wall Street Journal noted on the morning after the bombing of Pearl Harbor: “War with Japan means industrial revolution in the United States.” Over the next few years, billions of dollars flowed from Washington throughout America, paying for steel and boats and guns and tanks. There are hundreds of towns that have subsisted because they make a product valuable to war.

After World War II, defense spending declined (to $141 billion in 1947 from $908 billion in 1945), presenting an opportunity to shift resources away from the military. But then the Soviet Union rose in the East, giving birth to the military-industrial complex, even as President Dwight Eisenhower, in his “Chance for Peace” speech, said: “Every gun that is made, every warship launched, every rocket fired, signifies a theft from those who hunger and are not fed, those who are cold and are not clothed.”

Every new conflict, from Yemen and Palestine to China and India, offered new clients for U.S. weapons makers and kept the industry prosperous. The bloody, expensive wars in Iraq and Afghanistan supercharged defense spending, enriching a generation of contractors, manufacturers and their go-betweens.

[Read next: “Pope Francis says to cherish the elderly. Kane Tanaka, who recently died at age 119, shows us why we should.”]

And the persistent desire to kill other people, which always finds its way back into societies, is why the United States, the world’s greatest capitalist country, has the greatest weapons industry. “Everybody wants to buy American, then European, then Russian or Chinese,” Mr. Feinstein told me. (Ukraine, he noted, “used to be the main weapons manufacturing supplier to the Soviet Union, and up until recently was still supplying a lot of arms to Russia.”)

Presidents might push back. In March 2009, President Obama insisted that “the days of giving defense contractors a blank check are over.” But the arms industry is so structurally entrenched that it always fights back and wins in the end.

But what of the need for legitimate defense? Don’t we need a strong military for when a Putin comes along?

Mr. Feinstein said he is not a pacifist. “We need an arms trade of an appropriate size and weaponry that is used only in the most dire circumstances,” he said.

When I reached Mr. Feinstein, he was on the road, driving around England and Scotland to talk about the weapons trade and promote his book and a film with the same name. “I don’t know why there aren’t more books about this,” he said. “It seems like something we should be talking about much more.”

[Also by John W. Miller: “The dystopian Superbowl ad for the metaverse raises serious metaphysical questions” and “The Great Resignation and anti-work movement: Catholics should celebrate the changes to our labor market.”]

1
Exclusive: Pope Francis discusses Ukraine, U.S. bishops and more
The Editors
2
What I learned about the priesthood of all believers as a priest lay dying in a hospital room
Michael Strande
3
Why indifference is so important to Jesuit spirituality
J.D. Long-García
4
Ita, Maura, Dorothy, Jean: The legacy of 4 missionaries murdered in El Salvador 40 years ago
Margaret Swedish
5
A brief history of ‘O Holy Night,’ the rousing Christmas hymn that garnered mixed reviews
Benjamin Ivry