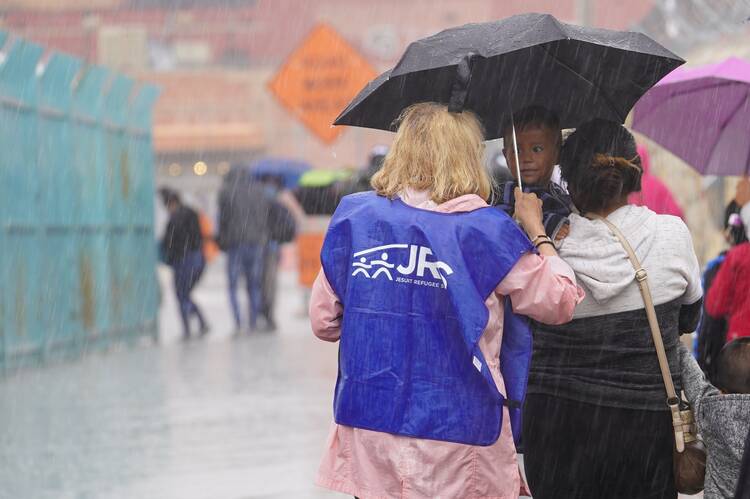 Sometimes accompanying migrants means serving them even after death.

Jesuit Refugee Service’s Caminar Contigo, launched in 2021, helps refugees, asylum seekers and displaced persons at the U.S.-Mexico border. Kate Mullins, Caminar Contigo’s psychosocial support specialist, shared the story of a lawyer who had been working with JRS on one woman’s asylum case.

Tragically, that woman did not receive the medical care she needed and died of health complications before her appeal could be heard. But the lawyer continued working on her behalf, taking the steps necessary to ensure that her body was returned to her home country.

“The asylum process can be a long and arduous journey,” Ms. Mullins said. “And it can continue even after someone dies, both for the individuals who accompany them and for their family members. We support people even in those moments.”

“It’s surprising to us that since the election, [border] policies have not changed. There was a roll back, there was a time of more exceptions being made...But it’s very disappointing that [Trump administration] policies are still in place.”

Before beginning Caminar Contigo, JRS team members had consulted with service providers working on the border, looking for gaps in care that needed filling. “What really stuck out to us,” Ms. Mullins said, “was the mental health and psycho-social needs” of migrants.

The limbo experienced by asylum seekers waiting to be admitted to the United States and the traumatic experiences that forced them to leave their home country in the first place take a profound psychological toll.

“Legal teams felt like they did not have the [psychological] skills or capacity to be asking the kinds of probing questions required in asylum claims,” Ms. Mullins said. As part of that process, asylum seekers often have to recount horrific details of their experiences to justify their claims, she explained. Caminar Contigo hopes to address mental health needs that might emerge during that application process or because of other experiences migrant people may have had at or traveling to the border.

“Many of the people who come to the shelters have been through or have experienced significant loss,” said Joan Rosenhauer, the executive director of Jesuit Refugee Service USA. “They may have lost loved ones on the way. They may have lost loved ones back in their home while they were gone, and they never were able to go through the grieving process.”

JRS staff developed ceremonies where asylum seekers are able to “express their grief if they chose to or reflect on it privately,” she said. “They will write a letter to their loved one. They can keep the letter or the letters are burned into the atmosphere.”

The ceremonies help asylum seekers know they are not grieving alone, Ms. Rosenhauer said. “The first step is to listen and deepen understanding, give people a chance to tell their story,” she said.

The limbo experienced by asylum seekers waiting to be admitted to the United States and the traumatic experiences that forced them to leave their home country in the first place take a profound psychological toll.

Recreating social networks for those who have lost them is critical, Ms. Mullins said. While Caminar Contigo does offer one-on-one help with a psychologist, she said developing a peer support system is often a more effective assistance to migrant people. JRS trains volunteers in psychological first aid, teaching them best practices for helping people in crisis. They also offer asylum seekers ways to begin to take care of themselves, including teaching stress management skills. Since they are serving people on the move, JRS designed the program to be useful after just one encounter.

“The people that are in Mexico have endured a lot of really difficult experiences but are also incredibly resilient to have made it that far,” Ms. Mullins said. “Sometimes helping that person look back at how far they’ve come and reminding them of those strengths helps when they are feeling disempowered.”

JRS-USA is partnering with JRS Mexico to provide services both in Ciudad Juarez and the El Paso region. The connections on both sides of the border will allow them to offer refugees comprehensive services.

Over its first year, the volatile conditions of contemporary migration forced the program to adapt. JRS teamed up with the Ignatian Solidarity Network and the Kino Border Initiative to set the groundwork for a comprehensive migrant accompaniment program.

That dimension of the program began to take shape during a Jesuit Migration Network meeting, according to Chris Kerr, executive director of the Ignatian Solidarity Network, as team members discussed the needs they heard migrants express. Asylum seekers were calling the Kino Border Initiative looking for sponsors, for example. Others came across the border hoping to connect with a family member in another state and needed help reaching their family members.

Gangs are present throughout Mexico. That means that asylum seekers continue to face grave danger while they wait in border shelters for their asylum cases to be heard.

Now a number of groups are partnering to establish a formal network through Caminar Contigo to help migrating people as they move from the border region to the interior of the United States, Mr. Kerr said. JRS hired a coordinator for the program. Kino is able to assess the needs of those who reach the border, and members of the Ignatian Solidarity Network offer assistance around the country.

Volunteers from a program hosted by Bellarmine Chapel, on the campus of Xavier University in Cincinnati, have provided accompaniment for migrants over the years, helping them navigate the immigration or asylum process, Mr. Kerr said. The Jesuit community at St. Ignatius High School in Cincinnati has hosted out-of-town families overnight so they can make early morning asylum hearings.

The Covid-19 pandemic has complicated Caminar Contigo’s work in a number of ways, Ms. Rosenhauer said. Even arranging for staff members to travel across the border to Ciudad Juarez is more complicated. Life at the shelters in Mexico, with safety measures in place, has changed daily routines.

Ms. Rosenhauser charged that the U.S. government has used the pandemic as an excuse to shut down the asylum process.

“It’s very surprising to us that since the election, policies have not changed,” she said. “There was a slight roll back, and there was a time of more exceptions being made...But it’s very disappointing that [Trump administration] policies are still in place. Fewer people crossing into El Paso and then moving on. We thought we’d be attending to that process more.”

Ms. Rosenhauser specifically mentioned the Migration Protections Protocol, which requires that asylum seekers be returned to Mexico to await adjudication of their cases, and Title 42, a U.S. public health law provision that allows Border Patrol agents to summarily expel adult migrants at the border with little justification because of the Covid-19 pandemic. This section of U.S. law allows the director of the Centers for Disease Control to prevent individuals from entering the country when “there is serious danger of the introduction of [a communicable] disease into the United States.” It was put into effect during the Trump administration and extended under the Biden administration.

“We're hoping that more people will be allowed to seek asylum in the United States,” she said. “We have such a history [of caring for asylum seekers], especially after World War II, when our country made a commitment not to turn people away who were fleeing for their lives. And we have let that commitment go in the last few years. Hopefully, we will get back to it very soon.”

Ms. Rosenhauer noted that gangs are present throughout Mexico and that they pursue those fleeing violence in Central American countries all the way to the border. That means that asylum seekers continue to face grave danger while they wait in border shelters for their asylum cases to be heard.

Ms. Rosenhauer shared the story of a woman she met in Honduras. A local gang was threatening to take her daughter as a “gang wife.” The woman took what money she had and sent her daughter north to the United States by herself. She did not have enough money to accompany her.

“I said to her that it must have been so hard to make that choice,” Ms. Rosenhauser said.

The woman told her, “I knew what would happen if the gangs took her. What would you do?”

“And I have a daughter and I can tell you exactly what I would do,” Ms. Rosenhauser said.

“I would be one of the women in the shelter with my children,” she said. “That is exactly what I would be doing. These are human beings just like us. They’re mothers and fathers just like us. Most of us would make the same choices they’re making, and now we just have to help them as they move forward.”

Correction: A previous version of this article reported that the Caminar Contigo program began in 2019. It officially began in 2021.