The difference between Jan. 6 rioters and Black Lives Matter—and the Catholics who refuse to see it 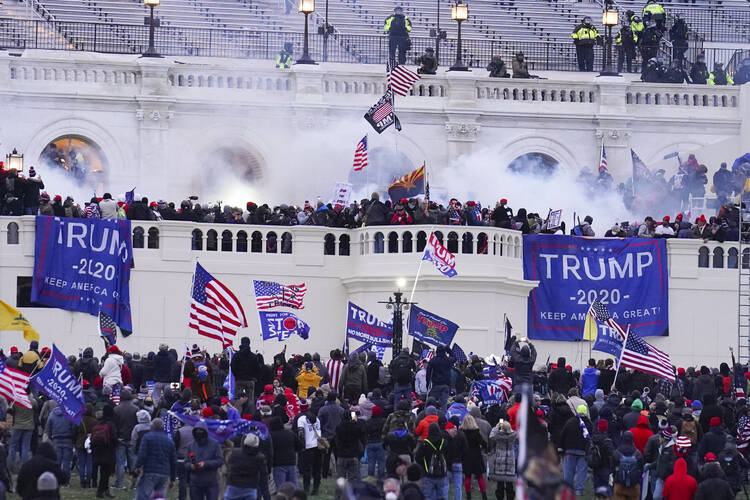 The first time I publicly referred to Joseph R. Biden as the president-elect, a priest chided me for doing so because, according to him, the election outcome was still uncertain. I searched his face, unsure if he was joking. He was not, and that was the beginning of my personal encounter with Catholics who did not believe Mr. Biden was president-elect and later refused to acknowledge that he was the president.

I heard many reasons for disbelief, from widespread voter fraud to foreign influence to voting machine irregularities. Why would the outcome of this election, of all the elections we have had in the history of our country, be the one that some Catholics openly rejected? How are they coping with the reality that Donald J. Trump is not the president?

The first time I publicly referred to Joseph R. Biden as the president-elect, a priest chided me for doing so.

This conversation and subsequent ones still did not prepare me for the attack on the Capitol by Americans who refused to accept the fact that Mr. Trump had lost the election. These self-described patriots emphasized law and order, “back the blue” and the necessity of peaceful protests during Black Lives Matter protests. Yet they stormed the Capitol to stop the will of the people. They attacked the police and desecrated the halls of Congress. Their raw display of power and violence against our country was best displayed by the insurrectionists carrying the Confederate battle flag. That flag represents treason, in my opinion, and it was galling that these people waved that flag inside the halls of Congress—something even the Confederates had failed to do during the Civil War.

While some Black Lives Matter protests involved the destruction of private property, none attempted to thwart elections. The attempt to overturn our electoral process is a grave threat to our republic. Movements for racial justice, for the end of police brutality against Black people, do not seek to rob citizens of their rightful participation in the democratic process but rather seek to protect the brutalized. Do some fringe actors in these racial justice movements go too far? Yes. But they are not representative of nor integral to the movements themselves. Yet the sustained outcry from some in our church and the framing of entire racial justice movements as godless, demonic, Marxist attempts to destroy the republic seem unbalanced, especially in comparison to the relative silence about a direct, physical, violent attack on Congress and our electoral process.

Movements for racial justice do not seek to rob citizens of their rightful participation in the democratic process but rather seek to protect the brutalized.

When I saw all those people attacking Congress, I thought Black people, en masse, could never do that. Why? Because throughout U.S. history, even the exercise of our rights or peaceful protests in defense of our basic human dignity were met with extreme violence.

Remember the 1898 insurrection in Wilmington, N.C? It was the only successful coup in the United States. At the time, Wilmington was a place with many successful Black people. The formerly enslaved owned land, ran businesses and built churches. Despite the threats of violence and campaigns to disenfranchise African Americans, Black people registered and voted in large numbers. After an interracial coalition won elections that demonstrated the rising political strength of the Black community, former Confederates murdered Black people, forced the duly elected officials to resign under threat of violence and installed their own “winner.” The election loss was unbearable to white Southerners who saw themselves as the rightful and sole heirs to political power. Black people fled for their lives.

Why do some members of our church perceive racial justice movements as more of a threat to the republic than the movement that led to the assault on Congress?

The motives of the Capitol insurrectionists are similar to those of the 1898 Wilmington coup. Robert Pape, Ph.D., of the University of Chicago conducted extensive research on the 700 people arrested for the attempted coup on Jan. 6. In this week’s episode of “The Gloria Purvis Podcast,” he said that race was an important driver for their participation. He revealed that the Jan. 6 rioters came from areas where the white population was in decline and that they believe the “great replacement” theory spread by some pundits. According to this theory, Black people and other people of color are replacing whites and diluting their political strength. These have long been considered to be fringe ideas, but according to Mr. Pape, they are increasingly mainstream.

Mr. Pape says the political violence throws law enforcement “for a loop” because they are used to dealing with the fringe, not the middle-aged doctors, lawyers, architects and business owners who stormed the Capitol. Perhaps that is why the police did not perceive the mostly white crowd as a serious threat. Perhaps that is why the police presence, military-style weapons and use of force was small in comparison to the police presence, weapons and use of force met by Black Lives Matter protests.

Listen to my discussion with Professor Pape to learn more about what we can do to stem the spread of these sinful ideas.