How faith leaders can prevent the next Jan. 6 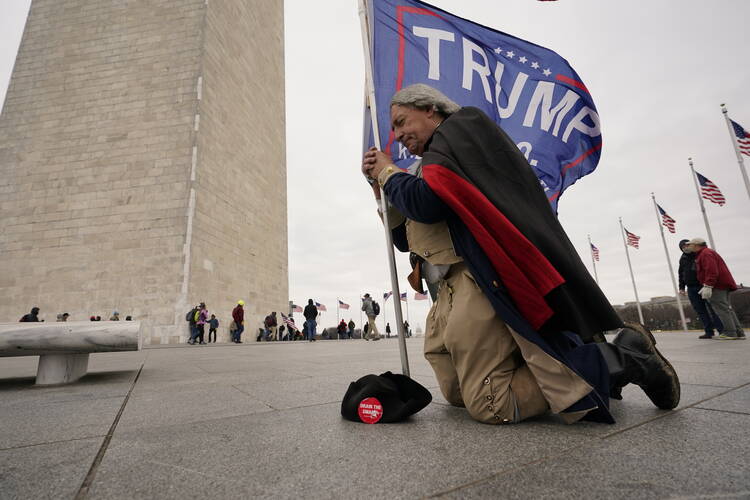 A man dressed as George Washington kneels and prays near the Washington Monument with a Donald Trump flag on Wednesday, Jan. 6, 2021, in Washington. (AP Photo/Carolyn Kaster, File)

This week on the Gloria Purvis Podcast, Gloria speaks with Robert Pape, Ph.D., a professor of political science at the University of Chicago. Dr. Pape specializes in national and international security affairs, and over the past year, he has studied the events of Jan. 6 to understand the 700 Americans who stormed the U.S. Capitol on that day.

According to Mr. Pape’s extensive research, the people who participated in the Capitol riot—and the beliefs they hold—are not on the fringe but are decidedly “mainstream.” And he believes that faith leaders have a vital role in reaching these Americans who are increasingly comfortable with the use of political violence.

Gloria Purvis: You’ve studied international domestic terrorists for 20 years, and you’ve debunked a number of misconceptions in your research. Let’s look at your research on the Jan. 6 insurrection one year later. What was the most significant finding out of the data about Jan. 6?

Dr. Robert Pape: The absolute number one finding is the word mainstream. We’re so used to thinking of extremists as being on the fringe—being part of fringe militia groups or fringe religious sects. What’s striking about those who broke into the Capitol—and also what’s striking about the insurrectionist sentiments in the country today in the general population—is they are mainstream. And this comes through in our research in multiple ways.

GP: Do you think that because these people are mostly mainstream is one of the reasons some people struggle with even calling it an insurrection? How would you address the people that don’t think they’re insurrectionists and think things like Black Lives Matter protests were more of a threat to the republic?

RP: That the political violence that we see in front of us is mainstream really throws us for a loop. It makes us want to normalize what we’re seeing because it’s part of the mainstream. It also throws law enforcement for a loop because law enforcement is used to dealing with the fringes. The more it’s really a mainstream phenomenon, the more challenging it is for us to come to grips with.

GP: When you say mainstream, are we talking about these insurrectionists being just everyday people who live right next door to us?

RP: More so than we’ll feel comfortable with. So let me just tell you some facts about who broke into the Capitol. The number one finding is their economic profile: Over half of the nearly 700 who were arrested for breaking into the Capitol are business owners or from white collar occupations—doctors, lawyers, architects. Only about 13 percent are members of militia groups like the Oathkeepers or the Proud Boys.

Over half of the nearly 700 who were arrested for breaking into the Capitol are business owners or from white collar occupations—doctors, lawyers, architects.

They’re not 100 percent the same as the general population. They’re more white; 93 percent of those who were arrested for breaking into the Capitol are white. They are also more male—about 85 percent. But it is the case that overwhelmingly what we’re seeing is the mainstream.

GP: One of the things I’m curious about is if there was any role that religion, particularly Christianity, played in this movement, which led to a siege of the Capitol.

The primary beliefs of the movement are not mainly religious.

What we found is that a large number of Americans—21 million—hold two radical views. One, they believe that the use of force to restore Donald Trump to the presidency is justified. Number two, they believe that Joe Biden is an illegitimate president. Those are the two key insurrectionist beliefs we saw on Jan. 6.

GP: If this is mainstream, what are the signs that we might see among our own family or neighbors that might indicate that they are sympathetic to, and could be radicalized by, this movement?

RP: When we look then at the details of where the 700 who have been arrested for breaking into the Capitol, where did they live? Where did they come from? They came from 44 states, not just around Washington, D.C.

When we look at the county level, more came from counties that Joe Biden won than that Donald Trump won. In fact, the more the county voted for Trump, the less likely was the county to send insurrectionists. Where are they coming from? Large metro areas. They’re overwhelmingly coming from large metropolitan areas where they are a political minority.

This is why the empirical research that we’re doing is so important because it’s easy to say, “I have my idea of what a right-wing extremist looked like, and I’ve had that idea for decades.” But this is a different situation. And it’s important to see that because otherwise we’re going to think of the normal solutions in what’s called countering violent extremism: Let’s give people jobs. Well, if we’ve got 50 percent of business owners and doctors, lawyers and architects, how much is that really going to matter?

The more the county voted for Trump, the less likely was the county to send insurrectionists.

Their average age is around 42. They’re centered in their 40s and 50s, not in their mid-20s. A lot of times with countering violent extremism, we think, “Well, they’ll just kind of age out of it.” This is not realistic when folks are in their 40s and 50s, because they’re already married, they’ve already got kids. This is why it’s really important to see to actually focus on the details of who was involved because it means that this is now a political challenge for our political leaders.

And when we start to peel the onion further, what we see is there’s an idea on the right that used to be just a fringe idea, which is now moving into the mainstream, called “the great replacement.” This idea is that whites are being replaced by non-whites; it’s either happening through just birth or, in the right-wing extremist conspiracy theory, liberal Democrats are making it happen by opening the borders so that they can change the electorate. The number one characteristic that the counties that the individuals came from have in common is the decline of white population in their counties.

Keep in mind there are plenty of politicians and media figures that are touting this idea of the great replacement. And so if you live in an environment and it starts to seem like it matches the reality of what you’re watching on TV, you can start to see how that conspiracy theory can start to produce violence.

GP: As a person of faith, I’m thinking: How do we counter this? How do I talk to my neighbors?

RP: Faith leaders, the church—they’re powerful voices in the community, in the mainstream. And at a point in time when our politicians are so polarized, we need places where we can have real dialogue. Church leaders are a powerful venue for ameliorating what we have in front of us today. Having church leaders see the details of what I’m describing here...to really come to grips with this information and absorb what we’re describing, that’s the next step.

It’s important that the faith leaders not say: “That’s just an F.B.I. problem or that’s just a politician’s problem [or] that’s a Republican Party problem.”

It’s important that the faith leaders not say: “That’s just an F.B.I. problem or that’s just a politician’s problem [or] that’s a Republican Party problem.” Faith leaders can just be tremendously important, but that means that faith leaders have to come on board with the mission. We protect democracy by looking to our community leaders, not just our national politicians and not just law enforcement.

GP: I’m concerned about what will be happening in the 2022, 2024 elections if this sentiment, instead of going away, has remained as strong as ever.

RP: That’s why it is so important not just to think about Jan. 6 as a historical event, but about what it means for the future. This could be quite a volatile election season, and 2024 possibly even more so. But there’s reason for the faith leaders to act now, not to wait until the next event occurs, because we’re coming up to a series of very serious, contentious elections where sparks can fly.

And when sparks are flying with this much dry kindling, fires can be touched off in a variety of ways. What happened on Jan. 6 is: We waited, the fire went off, and then people said: “Wait a minute. Why, why can’t we stop this?” Well, it’s because you’ve got the fire. You’re not going to just pick up the phone and 10 seconds later get 25,000 troops in Washington, D.C.

That’s why we don’t want to just wait. We need to act now. Faith leaders: This is just so crucial for the country and our population and our democracy going forward.