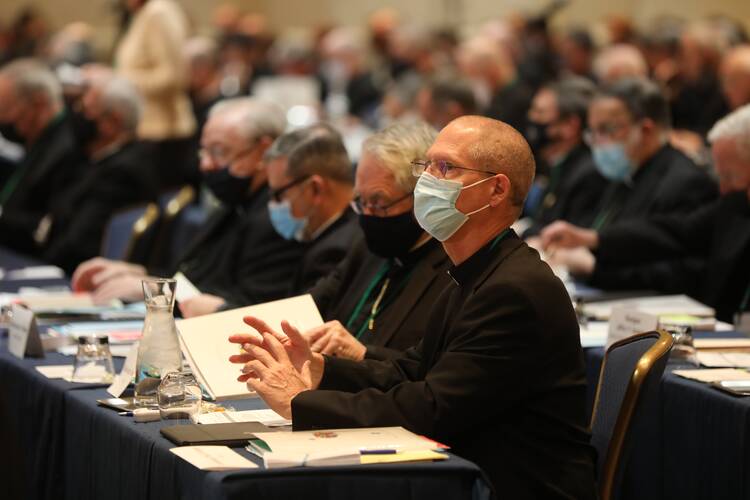 Archbishop Paul D. Etienne of Seattle, wearing a protective mask, right, attends a Nov. 16, 2021, session of the fall general assembly of the U.S. Conference of Catholic Bishops in Baltimore. Due to the COVID-19 pandemic, it is the first in-person bishops' meeting since 2019. (CNS photo/Bob Roller)

In November, the U.S. Conference of Catholic Bishops approved a teaching document on the Eucharist at their fall meeting by a vote of 222 to 8, with three abstaining. The bishops had approved the drafting of the document in June, sparking an internal debate about whether it should be used to sanction pro-choice politicians. That week, America covered the issue from various perspectives, including an interview with Senator Dick Durbin, a Catholic who supports abortion, and an episode of “The Gloria Purvis Podcast” featuring Archbishop Salvatore Cordileone of San Francisco, a staunch pro-life advocate. Our coverage elicited hundreds of comments. Here are some samples.

We would like to acknowledge Senator Durbin’s lifelong dedication to public service and his commitment to advancing many policies and programs that recognize the underprivileged and marginalized. In these areas, we are grateful for his contributions to causes that are of great importance to the church and her faithful. However, Senator Durbin’s comments in the America interview must be corrected, out of concern for his soul and out of concern for the confusion and scandal his words and actions present to the faithful of the church.

Senator Durbin suggests that the standard for worthy reception of the Eucharist is a “well-formed conscience.” This is untrue. Rationalizing one’s actions does not equate to a well-formed conscience, and one’s own self-assessment does not erase the objective reality of one being outside of communion with God and the church. Pope Francis recently affirmed this reality. Noting that there is no theological ambiguity in the matter of pro-abortion politicians, the Holy Father said, “Those people who are not in the community cannot take Communion, because they are out of the community. It is not a punishment: Communion is linked to the community.”

The Most Rev. Thomas J. Paprocki, Bishop of Springfield, Ill.

The Most Rev. Kevin W. Vann, Bishop of Orange, Calif.

(For the full letter, visit www.americamagazine.org/durbin-communion.)

Many no longer regard the church as the ultimate moral authority on a number of issues. I think that the “culture wars” the church is engaging in is an attempt to reclaim lost credibility. Unfortunately, [church leaders] have decided that the way to do this is to become players in the secular world of politics. It really doesn’t matter if President Biden or Speaker Pelosi are mentioned by name in the forthcoming document because the harm has already been done.

Senator Dick Durbin on being denied Communion over abortion stance: ‘I am careful when I go to a church’
Jim McDermott

As I read the interview with Senator Dick Durbin, I was struck by the depiction of the church as an organization rather than the mystical body of Christ. Either view affects how one sees these topics. Everyone is welcome in the body of Christ, so it makes me sad to hear that the senator feels unwelcome. At the same time, he is held to a different standard than your average Catholic because he is obstinately supporting and advancing a practice that is heterodox to not just a teaching of an institution, but the commandment of God to not kill. His last line about conscience is troublesome. Against what is that “well formed conscience” measured?

Mixing politics with the faith is pure poison, and the church would have been grievously harmed had the bishops decided to subordinate the one, holy, catholic and apostolic church to any political party, no matter which one.

When a believer is made to feel unwelcome in the church for any reason, a greater sin has been committed. And that sin can be committed not only directly but indirectly. We are a church of sinners; we welcome sinners. The sooner we keep that reality in the forefront of our minds, the sooner faith, hope and charity become the true and obvious hallmarks of our church. You can’t bring about conversion by exclusion. Many regard the Catholic Church as an instigator of much evil for its history of exclusions. And these instances of excluding our own only reinforce their impressions.