Abortion is integral to upholding systems that oppress women. That’s why I support the new Texas law. 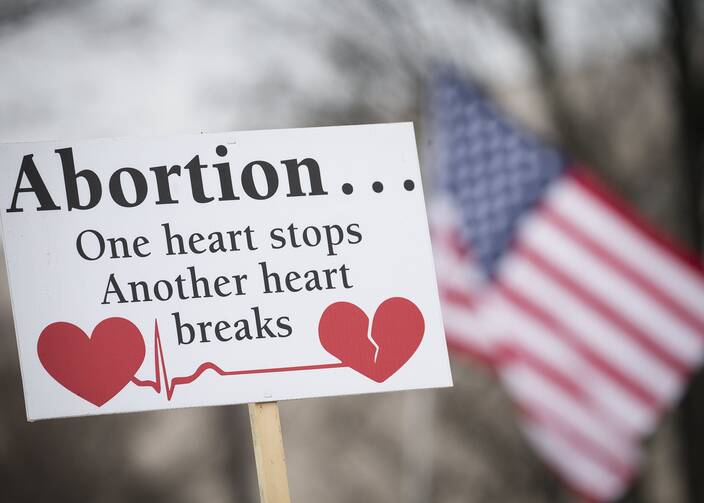 A pro-life sign is displayed during the 2019 annual March for Life rally in Washington. (CNS photo/Tyler Orsburn)

Years ago, an older lady with gray hair walked up to me and whispered in my ear that 40 years ago she had an abortion.

I had just spoken at a parish about the Catholic Church’s teaching on abortion. I spoke about the Lord’s mercy and forgiveness, the power of the sacrament of reconciliation and hope after abortion. She told me I was the only person she had ever told about her abortion since that day four decades ago. We hugged each other. I gave her the contact information for Project Rachel, a post-abortion healing ministry. She left. I never saw her again.

Since I am a woman and I also talk about the circumstances that may lead to abortion, similar encounters have become more commonplace over the years.

After more than 20 years of pro-life ministry, including counseling women outside of abortion clinics, I have heard many women and girls talk about why they aborted.

After more than 20 years of pro-life ministry, including counseling women outside of abortion clinics, I have heard many women and girls talk about why they aborted. Coercion, abuse, manipulation and hostility toward pregnancy are frequent themes.

I have heard and witnessed a variety of situations: a husband threatening to beat his wife to death if she dares to remain pregnant; a mother or father forcing an abortion because they believe it is best for their daughter’s future; a family threatening to expel the woman from the home if she does not abort; a boyfriend offering marriage in exchange for the abortion and then breaking up with her after the abortion; a private high school responding to pregnant girls with threats of expulsion; a college not offering practical resources for pregnant women; and a well-to-do husband preferring the expense of a new luxury car rather than welcoming a new child.

Aware of the harm done to women and the grave evil of abortion, I wondered how the new Texas Heartbeat Act addresses such women. So I read the complete text of the law.

Aware of the harm done to women and the grave evil of abortion, I wondered how the new Texas Heartbeat Act addresses such women.

First, the Texas law mandates that the physician determine whether the unborn child has a heartbeat, and if the child does, the physician is prohibited from performing or inducing an abortion.

Second, the act permits abortions for a medical emergency. The reason for the abortion must be noted in the pregnant woman’s medical records and in the physician’s notes.

Third, private citizens can bring a civil suit against the physician and anyone aiding or abetting abortions that are not medical emergencies. Citizens have six years from the date of the abortion to file suit. Defendants would be liable for damages of a minimum of $10,000 for each abortion that violates the Texas Heartbeat Act.

While some view the law as sneaky and immoral because it allows private citizens to bring suit, I don’t agree.

In other words, the law does not imposeany penalties on the woman who had an abortion.

While some view the law as sneaky and immoral because it allows private citizens to bring suit, I don’t agree.

I believe the act is moral because none of its elements are evil.

Others assert that the Texas Heartbeat Act is unjust because rich women can secure abortions outside of Texas therefore only the poor, especially poor Black women, are “stuck” bearing children.

As Catholics, we do not believe abortion is a just action nor do we believe that being pregnant and giving birth are unjust actions.

We believe abortion violates the nature of women, that is, our natural power of becoming pregnant and giving birth. A law is not just if it runs counter to the nature of a thing, in this case, a woman. Abortion, then, also cannot be a right for those same reasons. We are not owed abortions because it is an act contrary to the nature of the female being. So, the Texas Heartbeat Act does not deprive women, rich or poor, of a natural right and as such it is not unjust.

Given my experience with women who have been coerced, manipulated and abused because of abortion, I see the Texas Heartbeat Act as a means of justice for these women. This law centers a woman’s abortion as grounds for civil action against her abusers. This is just. This is one step among many that can be taken to make abortion unthinkable in our culture.

Rebuilding our world to embrace femaleness, our way of being, as the model of perfection for women would be just and right. Abortion thwarts this renewal.

Abortion is integral to upholding systems that oppress women. Imagine the law, businesses, educational institutions, the military, the economy, the very structure of our society not having abortion as a buttress. Imagine our world making way for women truly as we are and, in justice, giving us what we are due because of our womanhood. This is not just financial and material support but wholesale rethinking of our attitudes, practices and systems in our society and the church.

Gone is the idea of maleness as the model for human perfection. Rebuilding our world to embrace femaleness, our way of being, as the model of perfection for women would be just and right. Abortion thwarts this renewal.

In the latest episode of the “Gloria Purvis Podcast,” Helen Alvaré and I discuss how society has made abortion integral to women’s putative success, and yet the reason that many women choose abortion is because the system isn’t working for them. They do not have the opportunity, the pay, the protection, the support systems needed. If we want to make abortion unthinkable, change the systems.