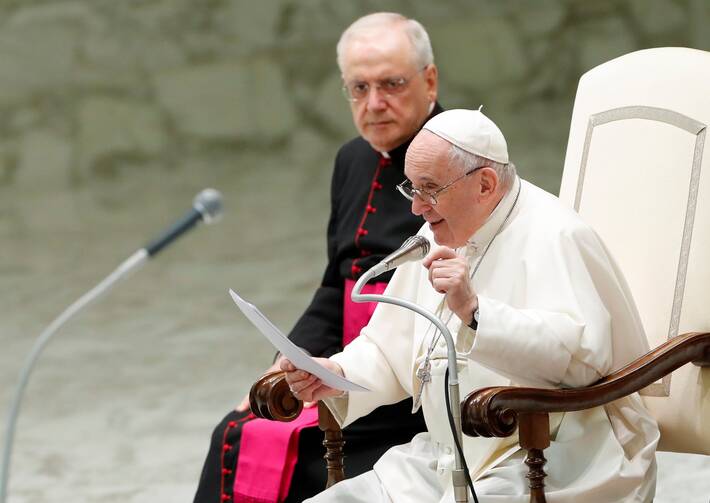 Pope Francis gestures as he speaks during the weekly general audience at the Vatican Oct. 20, 2021. (CNS photo/Remo Casilli, Reuters)

This weekend, Pope Francis gave a speech to grassroots activists that some are already calling an important contribution to Catholic Social Teaching. At America, we called it “Pope Francis’ 9 commandments for a just economy.” The pope called on everyone from tech giants to arms manufacturers to stop their destructive and extractive behaviors and instead put their energy toward activities that would build up a better post-Covid society.

We contacted every diocese in the U.S. about their synod plans. Here’s what we found.
Colleen Dulle, Doug Girardot

In the same talk, a video message sent to the “popular movements”–grassroots activist groups around the world–the pope called Black Lives Matter activists “collective Samaritans” and called for a shortened work week. On this episode of “Inside the Vatican,” host Colleen Dulle and Vatican correspondent Gerard O’Connell contextualize the pope’s comments and explain how his relationship with grassroots activists differs from past popes’.

In the second half of the show, Colleen is joined by America O’Hare Fellow Doug Girardot. In the last month, Colleen and Doug contacted every diocese in America to find out what they had planned for the recently launched global “synod on synodality.” The two discuss their findings, their experience reporting the story, and their unexpected appreciation for Eastern Catholic eparchies.

We contacted every diocese in the U.S. about their synod plans. Here’s what we found.