A Franciscan sister joins the fight for Indigenous rights in Brazil 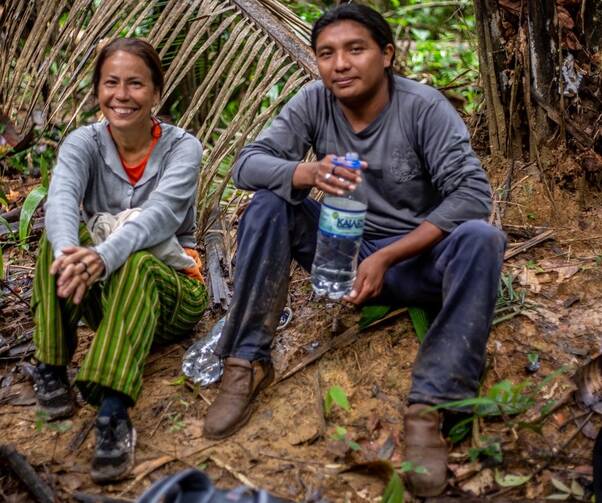 A sister in Rondônia State in the Brazilian Amazon region and a missionary among Indigenous peoples, Laura Vicuña Pereira Manso, C.F., is an unpretentious woman who has devoted her life to the nation’s urban poor and Indigenous people. Maybe that is why Pope Francis invited her to attend the Synod for the Pan-Amazon Region in 2019 and to be a member of the recently established Ecclesial Conference of the Amazon Region.

During the preparatory work for the Amazon Synod, its organizers heard Amazonian community leaders say many times that the daily life of the local church is built and nurtured mostly by women like Sister Laura. In a region of vast distances, weak infrastructure and a relatively small number of priests, religious and laywomen are the mainstay of Catholic spirituality.

The daughter of migrants from northeast Brazil, Sister Laura experienced that reality from an early age. Her mother, a Catholic community leader, had close contact with the Franciscan Catechist Sisters, a Franciscan-inspired congregation founded in 1915 in the southern region of Brazil. They arrived in the Amazon the same year as Sister Laura—1969.

Organizers of the Amazon synod heard community leaders say many times that the daily life of the local church is built and nurtured by women like Sister Laura.

“I saw those nuns among the people, promoting actions to defend their rights, and that always attracted me. I wanted to be like them,” she told America.

At 13 she joined the congregation. Shortly after she began to meet members of the Brazilian bishops’ Indigenous Missionary Council (known by the Portuguese acronym C.I.M.I.), an organization that advocates for the territorial and human rights of Indigenous peoples in Brazil.

“They frequently came to our house after spending months in the forest among the Uru Eu Wau Wau, a people that had been recently contacted by the non-Indigenous society,” she recalled.

The expansion of agribusiness in the Amazon in the 1970s, promoted by the military junta that ruled Brazil between 1964 and 1985, led to conflicts with Indigenous communities. Attacks against entire villages and the spread of diseases cost the lives of thousands of Indigenous people those years. The C.I.M.I. was a focus of the church’s effort to protect Indigenous groups.

“The people from the nearby cities wanted to kill the Uru Eu Wau Wau,” Sister Laura said. “The C.I.M.I missionaries would tell us all about their work. I soon realized that I wanted to work with them. And I began to recognize my own history.”

A descendant of the Indigenous Kariri people, she almost never heard her family talking about their ancestry.

In a region of vast distances, weak infrastructure and a relatively small number of priests, religious and laywomen are the mainstay of Catholic spirituality.

“The Indigenous from the Northeast were massacred over centuries,” Sister Laura said. “Our family history was erased. My parents never mentioned it, due to the discrimination we always suffered.”

But traces of the Kariri’s resilience and determination survived, she said.

Sister Laura would go on to work with Indigenous youth, helping generations of Indigenous men and women pursue an education.

“The other day, a Karitiana Indigenous woman told me that she was only able to obtain a degree in education because of Sister Laura’s help,” said Terezinha Dalcegio, C.F., the regional coordinator for Sister Laura’s province. “Now she is studying to get a second degree in law.”

Working for many years at missions in the Brazilian states of Mato Grosso and Amazonas, Sister Laura became active in the defense of Indigenous peoples’ claims to their traditional lands.

In Brazil, many Indigenous communities have been displaced from ancestral territories. Some reoccupy their lands informally; others have been forced to settle elsewhere. In both cases, the official demarcation of the territory, thus its protection from outsiders, must be completed by the government, a process that can take decades.

Incursions by illegal miners and loggers and by ranchers who want to expand their pastures are common. President Jair Bolsonaro has frequently declared his intention to open Indigenous lands to use by agribusiness and other economic interests. During his presidency, territorial violations have grown exponentially.

What the women of the Amazon want is not so much the possibility of ordination, Sister Laura said, but a “ministerial church” that values women’s service to others, celebrating their talents and skills.”

“Since 2017, I have been working with the Karipuna, who have been terribly threatened by invaders,” Sister Laura said.

When she visits the Karipuna, Sister Laura often hears heavy machinery being run by invading loggers operating nearby, accelerating the deforestation of the territory. The evidence of ecological destruction can be seen everywhere in the territory, she said.

“At times, we have to hide in the woods in order to escape from them,” she added.

Adriano Karipuna is one of the members of the community assisted by Sister Laura. (Many Indigenous people use their community’s name as a surname.) He told America that the logging teams work day and night, devastating vast areas of the territory.

“Sister Laura began to help us years ago,” he said. “She has denounced the illegality of the invasion to the [judicial authorities]. But [the land invaders] are not simple workers. There is big capital behind them; otherwise they would not have so much equipment.”

Despite the challenging situation the Karipuna are facing, Adriano hopes that through community organizing and demonstrations in coalition with other Indigenous groups that C.I.M.I. helps coordinate, his people can call Brazil’s attention to the ecological and humanitarian threat posed by these territorial incursions. Sister Laura has been an inspiration in that effort, he said.

“She is a warrior. She dedicates herself to our cause and struggles against these atrocities practically alone, given that C.I.M.I.’s team is very small,” Adriano said.

In Brazil, many Indigenous communities have been displaced from ancestral territories. Some reoccupy their lands informally; others have been forced to settle elsewhere.

“She is active in different fronts, always advancing her vision of overcoming this patriarchal and misogynistic society,” he said.

“An old saying goes: ‘Ordinary people doing little things in unimportant places can achieve extraordinary transformations.’ That is what she has been doing, provoking great transformations,” he said.

With the outbreak of the coronavirus pandemic in 2020, Sister Laura collaborated with the Karipuna in defining and declaring a quarantine barrier around their village, a measure that helped contain the disease. Adriano said the Karipuna have experienced only seven Covid-19 cases and no fatalities.

When Sister Laura returns from the Karipuna territory to the urban community of Porto Velho, where her congregation’s house is located, she participates in an intense church life.

With the outbreak of the coronavirus pandemic in 2020, Sister Laura collaborated with the Karipuna in defining and declaring a quarantine barrier around their village, a measure that helped contain the disease.

“She is always involved with the community’s activities. I think church life is a kind of food for her soul,” Sister Terezinha said.

“As a woman who was born and raised here in Rondônia, she is a role model for many girls,” she said.

Maybe those girls know that, despite a chronic lack of support, women are a central element in the Amazonian church.

“Although it is not clear to everybody, the church in the Amazon would cease to exist if the women went away for good,” Sister Terezinha said. “Communities and movements depend on them. But there is much misogyny [in church and society] still.”

It is that reality that Sister Laura tried to describe during the synod in Rome.

“For me, the synod came to make concrete some aspects of the Second Vatican Council,” Sister Laura said. “One of them is the preferential option for the poor. The poor in the Amazon has the face of a woman, an Indigenous, a quilombola,” she said, referring to a member of a community who descended from escaped enslaved African people.

What the women of the Amazon want is not so much the possibility of ordination, she said, but the creation of a “ministerial church” that values women’s service to others, celebrating their talents and skills.

What the women “want in the Amazon and in the church,” Sister Laura said, is “to be recognized by what we already represent.”

The church may take more steps in that direction, she said, through the Ecclesial Conference of the Amazon.