Could Indigenous demonstrations against corruption lead to lasting change in Guatemala? 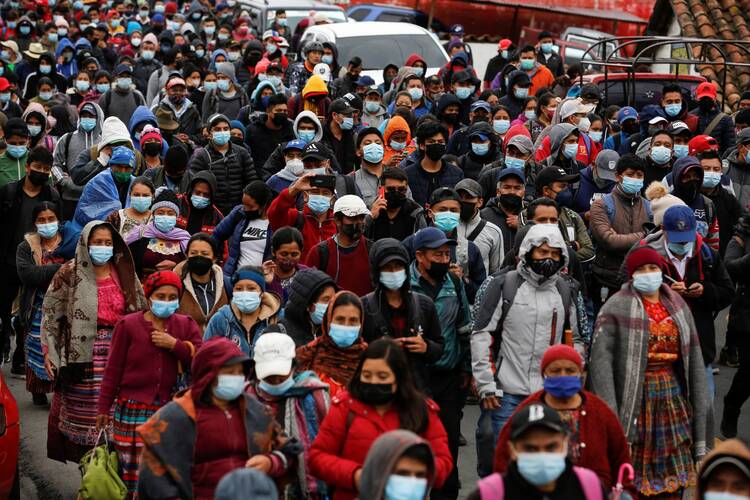 Thousands of Indigenous activists and small growers demonstrated in Guatemala on Sept. 15 against President Alejandro Giammattei’s administration and the country’s legacy of colonialism and racism. The day had marked the bicentennial of Central America’s independence, but protesters said they had no reason to celebrate that independence.

The divides in the Central American country are many: About a fifth of the population still supports the controversial president, while a majority disapproves of his administration. Most of the opposition comes from the countryside, while the government can count on support in the cities.

Guatemala’s historical social inequality has only worsened because of economic deterioration intensified by the Covid-19 pandemic.

Organized groups of Indigenous communities and subsistence farmers have been denouncing the president’s alleged corruption and calling for his impeachment, but other social actors have been seeking dialogue and reconciliation. The same split appears in the Catholic Church.

The political impasse has provoked increasing repression by the government and its supporters, according to Mr. Giammattei’s opponents.

“Like its Central American neighbors—El Salvador and Nicaragua—Guatemala is consolidating into an authoritarian state,” said Jorge Santos, the general coordinator at United for the Protection of Human Rights Defenders in Guatemala. “We are going through serious backtracking on democracy.”

At the beginning of September, the human rights advocacy organization released a report that described an atmosphere of political violence that has been created in Guatemala. According to United, there have been 551 cases of aggression against human rights advocates in the first six months of 2021, including five murders, three attempted murders, six illegal land invasions, 125 acts of harassment and 270 acts of the criminalization of activists, including illegal arrests and unjustified prosecution.

“Giammattei is an autocrat. No dialogue is possible with him. He is capturing the state, and now we can’t say that there is a proper separation of powers in the republic.”

He pointed out that the government declared a state of emergency 11 times in 2020, which allowed security forces to treat opposition groups especially harshly.

“Giammattei is an autocrat,” Mr. Santos said. “No dialogue is possible with him. He is capturing the state, and now we can’t say that there is a proper separation of powers in the republic. The judiciary and the Congress are totally aligned with the executive.”

According to Mr. Santos, the president’s seizure of the separate powers of government has been backed by economic interests that have been pressing for Guatemala to expand its export commodity markets in mining, African palm oil and sugarcane.

“Those businesses do not help to improve the Guatemalans’ life. Poverty will rise even more this year,” Mr. Santos said. According to the World Bank, about 85 percent of Guatemalans are either poor or live near the poverty level.

“Most city mayors, judges appointed by corrupt politicians and members of the military back Giammattei. The government is also supported by organized crime and drug cartels,” the Rev. Víctor Ruano, a parish priest in Jutiapa, a municipality near Guatemala’s southern border with El Salvador, told America.

Father Ruano has been a fierce critic of Mr. Giammattei’s administration, especially after the dismissal of anti-corruption prosecutor Juan Francisco Sandoval in July. According to a New York Times story, Mr. Sandoval was investigating accusations of bribe-taking by the president and listening to the testimony of a person who allegedly delivered a rolled-up carpet stuffed with cash to Mr. Giammattei’s house.

Rev. Víctor Ruano: “Most city mayors, judges appointed by corrupt politicians and members of the military back Giammattei. The government is also supported by organized crime and drug cartels.”

Mr. Sandoval’s anti-corruption unit linked the apparent carpet bribe to a plan by a Russian-backed mining company to receive Mr. Giammattei’s permission to partially operate a port in Guatemala, according to the New York Times.

The president had been regularly attacking Mr. Sandoval publicly, and the corruption investigator was eventually fired by Attorney General Consuelo Porras. He left the country with all the evidence he had gathered and handed it over to U.S. law enforcement officials in Washington.

“Mr. Sandoval was the judiciary’s last anti-corruption holdout,” Father Ruano said. “Now people are sure that impunity will prevail. It’s the consolidation of a narco-kleptocracy.”

Since July thousands of demonstrators have gone to the streets to protest against the Giammattei government. The protesters, most of them small growers, students and members of Indigenous groups, demanded the president’s resignation.

The president and secretary general of Guatemala’s bishops’ conference released a letter on July 25 condemning the dismissal of Mr. Sandoval, charging that his removal had caused “irreparable damage to the country.” The bishops said that the “process of judiciary administration in Guatemala has serious failures,” adding that the loss of credibility would provoke a “rising indignation of the citizens” and “growing social protests.”

The bishops’ position was welcomed by protesters, but a second letter calling for dialogue that followed a few days later caused great dismay. The bishops wrote: “We reaffirm that it is not the president’s resignation that the people must ask for, given that it would mean a serious regression in our democratic process, but instead they should remind him of the commitments he vehemently assumed in his inauguration speech and demand that he fulfills them."

Many Catholic protesters expected the church to give them full support. But “there is a great part of the church that keeps its distance from [the protests] and even sees them as contrary to the faith.”

Now some protest groups say “in the event of a national dialogue to solve the political crisis, they would not accept the bishops’ mediation,” said José Luis González, S.J., the coordinator of the Jesuit Migration Network of Central America.

The bishops’ declaration raised criticism even among the clergy and churchgoers. “My father, a 90-year-old man, asked me: ‘What happened to the bishops?’” Father Ruano recalled.

“Indeed, the first statement was very suitable. But the second one generated broad repudiation. Maybe it was not the right time to say what they said, although we respect their opinion,” Bishop José Benedicto Moscoso of Jalapa told America.

Bishop Moscoso said that many Catholic protesters expected the church to give them full support. But “there is a great part of the church that keeps its distance from [the protests] and even sees them as contrary to the faith,” he said.

Father González emphasized that some priests and bishops—including Bishop Moscoso—have sided with the people. The Society of Jesus released a statement on July 30 calling for Guatemalans to peacefully demonstrate against the government.

“I think [the bishops’ permanent council] feared violent reactions by the people,” Father Ruano said, pointing out that “Guatemala faced civil war for 36 years and a sufficient process of reconciliation and reparation has not been carried out.”

Solutions to transform the nation’s political impasse seem distant, many believe change will be driven by the subsistence farmers and Indigenous peoples.

Even as the opposition appears divided on how to deal with the president, the street protests have continued. On Sept. 20, several opposition groups asked for Consuelo Porras’ immediate resignation after the U.S. State Department announced sanctions against her and a close collaborator. Both are forbidden to enter the United States because of allegations of obstructing corruption inquiries.

“People are sick and tired of so much corruption,” said Mario Arévalo, the executive secretary for Caritas Guatemala. “The government diverted millions of quetzals [Guatemala’s currency] that should have been used to offer better healthcare services for the Covid-19 victims”

Adding to the social tension, Mr. Arévalo said that the Covid-19 vaccination rollout has been too slow. By the beginning of October, only 15 percent of Guatemalans had been fully vaccinated—2.5 million out of 18 million—and only 27 percent had received at least one dose.

Behind nations like Iraq and Bolivia and neighbors like Nicaragua and El Salvador, Guatemala scores poorly in the U.N.’s Human Development Index, a global measurement of life expectancy, education and standard of living, Mr. Arévalo pointed out. “Most of the [Guatemalan] people live in the informal economy,” he added. “The health care and education systems are nearly collapsing. A few families retain all the nation’s wealth.”

According to Mr. Arévalo, Guatemala’s Caritas network has been helping the poor with food and medicine since the beginning of the pandemic, despite a lack of funds itself.

“But we are not able to respond to all social problems in Guatemala,” he said.

While solutions to transform the nation’s political impasse seem distant, many believe change will be driven by the subsistence farmers and Indigenous peoples, the social groups that are currently mobilizing the demonstrations.

“We have never learned how to be citizens,” she told America. “We have a chronic lack of ethical reflection. The church is a very appropriate space to do that.”

One of Ms. Falla’s activities is to teach people how to produce radio shows. The community radio programs that result often deal with themes connected to Pope Francis’ encyclical “Fratelli Tutti.”

“People are outraged about how the state has cancelled social services [especially programs connected to food safety and healthcare] in a moment they need it so much. After decades of civil war, we need to bring back confidence and solidarity to all levels of society,” she said.

Ms. Falla explained that Indigenous movements that have mobilized during the recent demonstration hope to rewrite the Guatemalan Constitution to create a plurinational state, that is, one that recognizes that Guatemala is made up of several different Indigenous nations. Mr. Santos said the idea has been developing as a way of establishing a new social pact in the nation, one that can include the voices of all its peoples and protect their rights and natural resources.

“Despite the systemic racism that the Indigenous peoples face in Guatemala, they are currently leading the opposition to the current authoritarian regime,” he said.