St. Francis taught us that animals are our brothers and sisters. So let us weep for the newly extinct species. 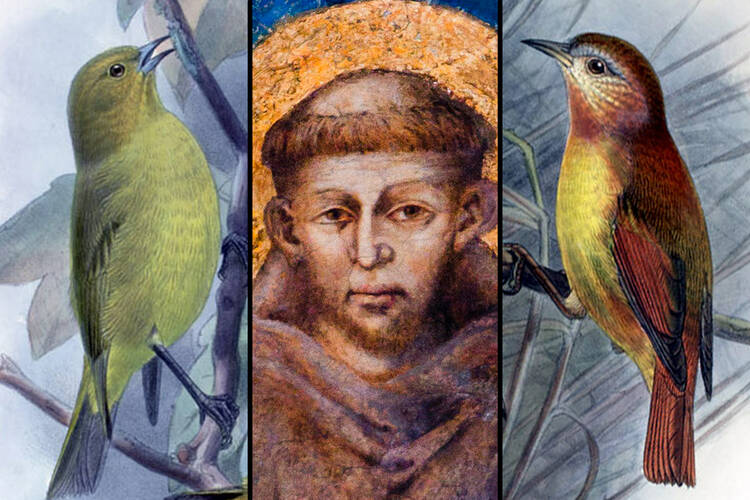 On the Hawaiian island of Kauai there lived a bird called the O’o (pronounced just like it looks) the last surviving species of a 15- to 20-million-year-old line of birds. The O’o’s appearance is a little like a cartoon bird: inky black with a yellow eye and pitched forehead that gives it a wonderfully cranky expression.

In 1987, a natural historian recorded the song of the bird; its call has a toy whistle quality that seems to brighten the air. But as this 2015 Discovery Channel documentary revealed, the bird recorded was the last known O’o in existence. The species no longer exists.

On Sept. 29, the U.S. Department of the Interior declared the O’o one of 23 animal and plant species it believes is now extinct. After a 60-day period of consultation from the public, the department will issue a final judgment, which will likely see the bird join 650 other U.S. species as being declared officially extinct.

On Sept. 29, the U.S. Department of the Interior declared that the O’o is one of 23 animal and plant species it believes is now extinct.

Most reports of the news focused on the extinction of the Ivory-Billed Woodpecker, known as the “Lord God bird,” because its bright red head feathers supposedly made people cry out, “Lord God!”

But each of these species has a story to tell both about the delicate and surprising wonder of life and about its destruction.

On this feast of St. Francis of Assisi, who taught that animals are our brothers and sisters, all of us children of God on the same road, we take a moment to give praise to God for some of our siblings now forever gone from this planet, and to try and deepen our union with all of God’s creation.

In 1973 a group of students from the University of Hawaii travelled into rainforests on the northeastern slope of the island of Maui. Because of the challenges of the landscape, these areas had remained largely untouched by humanity. High above the ocean, at an altitude of 6,500 feet, the students were shocked to discover a small finch-like bird that had never been seen before. It had brown feathers, a white chest and neck and a black head with deep brown eyes that suggested a kind of soulful wisdom.

On this feast of St. Francis of Assisi, we take a moment to give praise to God for some of our siblings now forever gone from this planet.

What they had discovered was a new species of the honeycreeper bird; in fact, the most ancient of all of Hawaii’s honeycreepers. DNA tests would suggest that it evolved from the main Hawaiian line almost 6 million years ago, long before most of the islands of Hawaii even existed.

Fossil records would also indicate that the “po’ouli” or black-headed honeycreeper used to live at lower elevations and ate spiders, tree snails and other insects. But when mosquitoes bearing an avian form of malaria arrived in the early 19th century via whaling ships, the birds were forced higher up into elevations where the temperatures were too cold for the insects. The strategy worked until rising global temperatures allowed the mosquitoes to survive at higher altitudes.

When another Hawaiian honeycreeper, the Molokai creeper, was first discovered in the 19th century, it was given the scientific name Paroreomyza flammea, because the birds’ brilliant orange and red colors made them look like balls of flame flying from tree to tree. The feathers of these five-inch birds were used in the capes and leis of Hawaiian royalty.

But they too struggled to survive the plague borne by the mosquitoes, which caused internal lumps that lead to paralysis and eventually death by starvation. The last time anyone saw a flying ball of flame on Molokai was 1963. No one ever recorded its song.

In Central Texas, the San Marcos gambusia lived along a half-mile stretch of the San Marcos River. This tiny fish preferred the quieter and more shaded parts of the river, where the temperatures showed little change and it could find the insect larvae and other invertebrates that it lived on. The gambusia were known as “mosquito fish” for their appetite for mosquitoes; a single gambusia, though only a few centimeters long, can consume hundreds of thousands of mosquito larvae. In fact their mouth has evolved in such a way as to make it easier for them to pull larvae from the water’s surface.

The last time anyone saw a flying ball of flame on Molokai was 1963. No one ever recorded its song.

The Scioto madtom, a tiny orange-yellow catfish, also lived in just one place, the Big Darby Creek in central Ohio. It was only ever seen 18 times, the last in 1957. Almost nothing is known about its life or death, due to its elusiveness. It, too, may have died out as a result of pollution and competition with other madtoms. Some scientists hold it was the only animal actually endemic to Ohio. “No other fish has been searched for more persistently by researchers in Ohio than this species,” according to the Ohio Department of Natural Resources.

Among the species now believed to be extinct are also eight kinds of mussels that had habitats in the southeastern United States. I don’t know about you, but I’ve never given mussels a first thought, let alone a second. But it turns out they are extraordinary in many ways. They can live 100 years. Though some species do migrate (very slowly), they mostly spend their existence buried in the floor of the rivers and streams where they live, with only the edges of their shells and their feeding siphons poking up.

Among the species now believed to be extinct are also eight kinds of mussels that had habitats in the southeastern United States.

The mating process of mussels is strange and seems incredibly unlikely to succeed, the undersea equivalent of spitting in the wind and hoping it makes a baby. Males discharge sperm that is then taken by the current to nearby females, who keep their eggs stored in their gills. Once fertilized, those eggs grow into tiny larvae no bigger than grains of sand called glochidia which then have to attach to the gills of nearby fish; the infant mussels will stay until they develop shells of their own. Some adult mussels actually have a part that looks like a tiny minnow to attract fish so this process can happen.

If there are no fish nearby, or if the flow of the water is obstructed, the glochidia fall to the river floor and die. Likewise, if the water has too much silt or other matter in it, the siphoning mechanism by which the adult mussels draw in the plant matter they live on will get clogged and they starve. Without lots of other mussels around to enable their mating process to succeed, species die.

The things that have destroyed these beautiful creatures are in some cases just as interesting and unexpected as the animals themselves.

For the dusty green four-inch Maui akepa birds, it was the yellow Himalayan raspberry shrubs brought to Hawaii for their tasty fruit in 1960. The plants spread rapidly and choked out the native growth the akepa relied on for nectar. They also drew insects and frogs that started to kill the insects the bird ate. Like other Hawaiian birds, the akepa were forced to go higher and higher until they basically ran out of places they could live. The last one was seen in 1988; its call was a slight whistle that ended on a long trill.

Pope Francis, in his apostolic exhortation “Evangelii Gaudium” describes the extinction of a species as “a painful disfigurement” of our planet.

For the little Mariana fruit bat in Guam, extinction was in large part a result of the Second World War. Military activity on the island saw habitats destroyed. The war also introduced firearms to Guam, which made it much easier to kill the bats. And military vessels accidentally also brought the brown tree snake to Guam and the Mariana Islands. Other than human beings and feral pigs, Guam had no real natural predators of its own, so the tree snake quickly took over, not only wiping out most of Guam’s forest species—including both the fruit bat and another bird on the Department of Interior's list—but endangering the lives of children and even causing power outages.

Pope Francis, in his apostolic exhortation “Evangelii Gaudium,” describes the extinction of a species as “a painful disfigurement” of our planet (no. 215). Spinning through the darkness on this little rock, we are all part of a delicate, interdependent web. Break enough strands, whether small or large, and the whole thing begins to disintegrate.

In the case of most of these species, though, the disfigurement seems pretty miniscule—a few tiny fish living in a few tiny places, some small island birds and bats and mollusks no one ever saw anyway. And it all happened long ago: The last time anyone saw a little Mariana fruit bat was 1968.

Editorial: ‘Fratelli Tutti’ challenges the American way of life. Are we listening?
The Editors

But the disfigurement the pope talks about is not just the practical one of our continued capacity for existence. It is not specifically about us at all—even though we are a proximate cause of the demise of every species listed above—but about this mosaic of life and beauty that is our world.

Every species lost is a unique life form created by God. And meant to be here, regardless of the destruction wrought by humanity’s notions of progress; a glimpse of him that will never again be seen or felt.