Analysis: How Texas’s new abortion law is a dramatic departure from legal norms 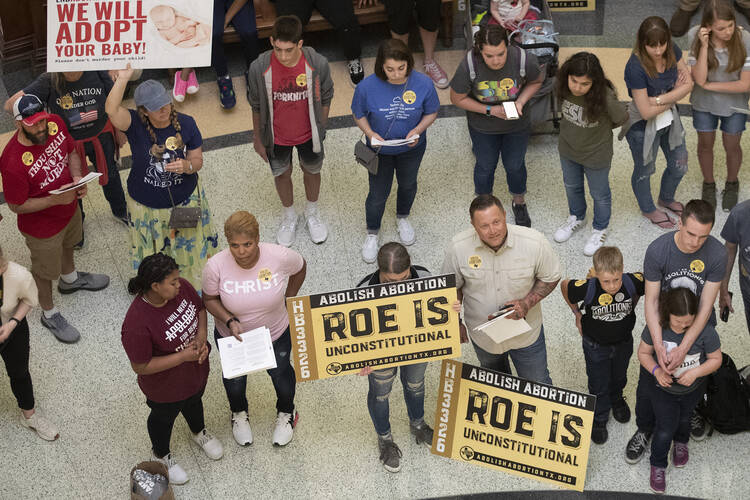 In this March 30, 2021, file photo, anti-abortion rights demonstrators gather in the rotunda at the Capitol while the Senate debated anti-abortion bills in Austin, Texas. Young people on social media have found a way to protest Texas' new law banning most abortions by focusing on a website established by the state's largest anti-abortion group that takes in tips on violations. (Jay Janner/Austin American-Statesman via AP, File)

It was bound to happen and it did. A little over two weeks after Texas passed its fetal heartbeat law, a San Antonio doctor revealed in a Washington Post opinion column that he performed an abortion in defiance of the new law. He was promptly sued in two separate lawsuits. These cases will permit a direct constitutional challenge to the controversial law.

The Texas Heartbeat Act is an extraordinary departure from legal norms. Rather than imposing government sanctions on abortion providers, the law empowers “any person,” other than a government official, to sue everyone involved in performing or “aiding and abetting” an abortion in Texas if that abortion is performed after the detection of fetal “cardiac activity.” That would be before most women and girls would know they are pregnant.

The law stipulates that it “may not be construed to authorize the initiation of a cause of action against or the prosecution of a woman on whom an abortion is performed or induced or attempted to be performed or induced.” Anyone found liable under the law must pay a minimum of $10,000 to the plaintiff plus the plaintiff’s legal fees, which could be hundreds of thousands of dollars.

The Texas Heartbeat Act is an extraordinary departure from legal norms. The law empowers “any person” to sue everyone involved in performing an abortion after the detection of fetal “cardiac activity.”

There is nothing unusual in permitting a private right to sue as a tool in enforcing law. Many federal and state laws supplement government enforcement by authorizing private lawsuits against violators. Numerous environmental laws, for example, permit “citizen suits” for court injunctions to stop and remedy pollution.

Like the Texas Heartbeat Act, these statutes award attorneys’ fees to successful litigants. Unlike the Texas law, however, environmental plaintiffs do not receive any financial reward for their efforts, unless they have been personally harmed by the pollution.

False claims acts, which authorize private lawsuits against those who have defrauded the government, include monetary incentives for plaintiffs, but the government receives most of the recovered funds. Other “private attorneys general” and private enforcement laws require plaintiffs to be personally “aggrieved” by the challenged action.

The Texas Heartbeat Act dispenses with these usual safeguards. Although defendants must pay the legal costs and fees of successful plaintiffs, wrongfully sued providers and friends and family members of pregnant women are specifically denied the right to recover their costs.

In a truly Machiavellian move aimed to chill practitioners into compliance without permitting judicial review, Texas completely privatized enforcement of the Heartbeat Act.

That means that even if it is determined that an abortion was not performed, a defendant did not aid and abet an abortion, or an abortion was permitted under the medical emergency exception—because there was a “danger of death” or “serious risk of substantial impairment of a major bodily function”—defendants bear the financial burden of their exoneration.

The Texas Heartbeat Act departs from typical legislation in another important respect. In a truly Machiavellian move aimed to chill practitioners into compliance without permitting judicial review, Texas completely privatized enforcement of the Heartbeat Act. The law specifically prohibits any Texas state or local official from enforcing or threatening to enforce the abortion restrictions. Without a government defendant to sue, abortion providers lost the ability to challenge the law prior to themselves being sued.

The tactic has been successful thus far because the federal Fifth Circuit Court of Appeals accepted Texas’s no-state-actor argument and the Supreme Court acquiesced (for now). Nevertheless, the logic behind this argument is flawed. Simply put, courts have already ruled that judicial enforcement is government action.

In New York Times Co. v. Sullivan, a case that made it more difficult for public figures to sue for defamation, the Supreme Court stated, “[a]lthough this is a civil lawsuit between private parties, the Alabama courts have applied a state rule of law…. The test is not the form in which state power has been applied but, whatever the form, whether such power has, in fact, been exercised.”

Similarly, in Snyder v. Phelps, the Supreme Court held that a lawsuit seeking damages for the state law claim of intentional infliction of emotional distress, brought by a father of a fallen Marine against church members who picketed his son’s funeral, violated the First Amendment. Although these cases involved active lawsuits, the same analysis should hold true when a state legislature uses the threat of litigation to prevent potential defendants from exercising their constitutional rights.

There are several pending state and federal challenges to the Texas Heartbeat Act. An injunction was issued in a Texas state court case, Planned Parenthood of Greater Texas v. Texas Right to Life, and an Oct. 1 hearing is scheduled in a federal case brought by the Department of Justice.

The outcome of that case may moot the Texas Heartbeat Act, but Texas’s scheme to avoid judicial review of a law designed to prevent citizens from exercising what courts have already defined as their constitutional rights offers a cautionary tale. Those who favor its novel private enforcement strategy should consider how they would be affected should it be used to enforce a law they disfavor.

California, for example, could resurrect its Reproductive FACT Act, which was struck down by the Supreme Court because its disclosure requirements violated the First Amendment rights of pro-life pregnancy clinics.

By transferring enforcement from the state to private litigants, California could cure the law’s constitutional defect because, as argued by the Texas Heartbeat Act’s supporters, the First Amendment would not apply, as the state has no “enforcement connection.”

More: Abortion / US Politics / US Church