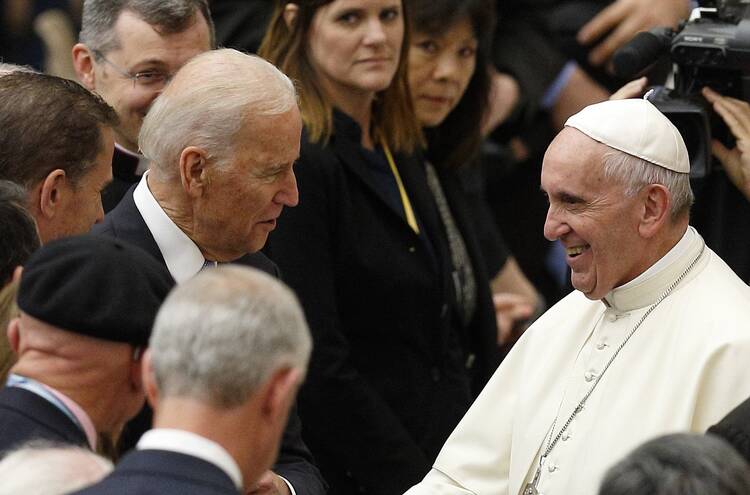 On his flight back to Rome from Slovakia, the pope was asked by America’s Vatican correspondent, Gerard O’Connell, about the debate in the U.S. church over whether politicians should be denied Communion because of their support for abortion. The hosts of “Jesuitical,” Ashley McKinless and Zac Davis, discussed the implications of his remarks on this upcoming Friday’s episode of the podcast. Below is an early transcript of their discussion.

[Listen and subscribe do Jesuitical on Apple Podcasts, Spotify, Android or wherever you hear your favorite podcasts]

Z: Pope Francis was asked by America magazine’s own Vatican correspondent, Gerard O’Connell, about what he thought on the debate about pro-choice politicians, Communion, the president and other people and whether they should be denied Communion on the grounds of their stance on abortion.

A: And the pope’s first response was that he has never refused the Eucharist to anyone ever.

Z: He actually had a very funny story where he was like: I went into a nursing home one time and I said, “Who wants Communion?” And everyone raised their hand. As a woman took the host and consumed it, she said, “Thanks so much, I’m Jewish.” And he said, “Oh, I gave you a Jewish one, too”—which I thought was very funny, very playful. But it went into a pretty serious answer about this question.

The pope’s first response was that he has never refused the Eucharist to anyone ever.

A: First, he revealed his own stance on denying Communion, which is that he doesn’t do it. Then he said, “Abortion is murder.” He did not want to mince words there. This is not about him not being concerned about the issue of abortion.

Z: He was pretty strong about that point, which is not a shock. He has said things like this before. The pope is definitely consistently pro-life and against abortion. But then he got into the question of how to deal with politicians who do not hold this view.

A: He specifically said that he wasn’t commenting directly on the situation in the United States because he didn’t know enough about the situation, which is a good reminder that the Catholic Church does not revolve around the United States. And what we think is the most pressing concern is not the pope’s top priority.

Z: But it is the top priority of a lot of bishops in this country, [that is] how to address this question [of pro-choice Catholic politicians]. And he answered, “What’s the theology on the Eucharist?” It is what he said before: It’s not a prize for the perfect; it’s medicine for sinners.

The Catholic Church does not revolve around the United States. And what we think is the most pressing concern is not the pope’s top priority.

Another thing I thought was really interesting was when he said, every time in history that bishops have not confronted the problem as pastors, they take sides politically. Even outside of the abortion issue, anytime that there’s a church teaching that has the stakes raised so much that bishops feel like they need to take political sides in it, it typically goes poorly. I thought that was an interesting observation because I think a lot of the complaints you are seeing in the church today are that sometimes the bishops are not political enough on some issues or that they are pretty myopic about the issue of abortion. And they’re too political on that and not political on other things.

A: This is something Pope Francis knows about. When he was a Jesuit provincial in Argentina, it was during a military dictatorship. He had to decide how to interact with that government, which was very far from ideal. But it just seems like in other countries there is not this same focus on [whether] the church can taint itself by associating with politicians that don’t hold positions that are consistent with the church.

Why are American Catholics obsessed with the politics of Communion? (Hint: Because we’re American.)
Matt Malone, S.J.

Z: Drawing other lessons out of this: One of the things that the pope is clearly trying to communicate is that for the church in today’s world, we have to be pastors and not politicians. And so what do shepherds do? He says, “Be a pastor. Be a pastor, and don’t go around condemning.” They must “be a pastor with God’s style. And God’s style is closeness, compassion and tenderness.” Which is not a clear-cut answer. That’s not, “Here’s how you do it.” It is messy. But, honestly, the business of Jesus is messy and trying to figure out how to address this is admittedly a difficult one. But the pope is saying that, I think as I read this, the approach that the church in the United States is trying to take with this proposed document on the Eucharist and politicians and abortion is not the right one.

The business of Jesus is messy and trying to figure out how to address this is admittedly a difficult one.

A: I was talking to our colleague about the pope’s statements. He made an interesting point: The attitude among some bishops in the U.S. church seems to be a lack of trust in bishops as pastors. [The pope] is not telling them what to do as pastors. He is telling them to be pastors. It seems like some bishops are nervous about that because when there is not a clear rule people can make different decisions. So there is just this fundamental lack of trust—that, when put in that position, being “pastoral” will mean confusing people about doctrine.