Why are American Catholics obsessed with the politics of Communion? (Hint: Because we’re American.) 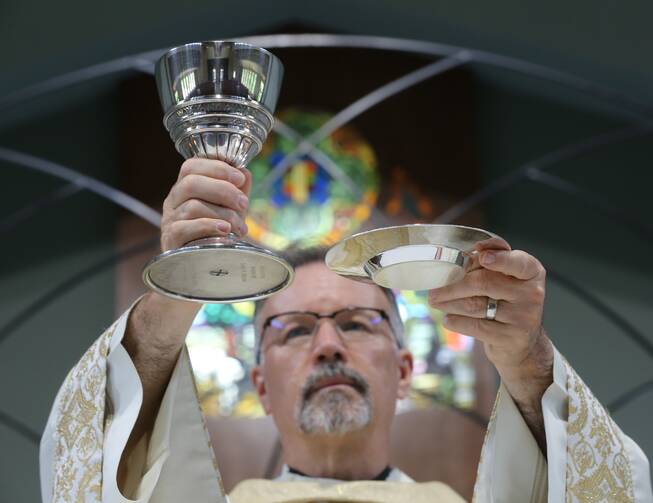 A priest raises the chalice and Communion host in this illustration. (CNS photo/Bob Roller)

A significant minority of the Catholic Church in the United States are once again engaged in a vigorous debate about whether Catholic politicians should be admitted to holy Communion if they hold public policy positions at odds with fundamental Catholic values. Abortion is the issue that predominates. Some believe that a Catholic politician who votes for pro-choice policies should be barred from Communion. Several prominent Catholic commentators have weighed in, including Archbishop Samuel Aquila and Bishop Robert McElroy, who took different positions. And the U.S. Conference of Catholic Bishops is expected to consider this month a document about this and related questions of “eucharistic coherence.”

If you are experiencing déjà vu, you’re not alone. The question I have been most frequently asked during my visits to Rome is why American Catholics seem singularly obsessed with this issue—not with abortion per se, which is a grave matter of life and death that should concern us all, but with the question of who should and should not be admitted to holy Communion based on their politics. To my Roman questioners, the United States appears to be one of the few places where this debate takes place with such regularity, not to mention passion. Much of the rest of the Catholic Church, they point out, has made up its mind.

The United States appears to be one of the few places where this debate takes place with such regularity, not to mention passion.

It is well known, for example, that St. John Paul II, while celebrating the Eucharist with the family of British Prime Minister Tony Blair in 2003, distributed Communion to Mr. Blair, who at the time was not only pro-choice but an Anglican. And I am aware of no evidence that would indicate that Pope Francis has ever publicly denied Communion to a Catholic who presented him- or herself for Communion. That’s quite telling, especially when one considers that Francis spent a lot of his early priesthood ministering in an overwhelmingly Catholic country that was then ruled by a murderous dictatorship. Presumably, if ever there were a moment for Francis to publicly deny Communion to a politician, that would have been it, but there is no record that he did that.

Which brings me back to now. In the midst of this great debate about whether politicians should be excluded from Communion, has anyone bothered to ask whether this actually happens? I mean, we’ve all heard the odd story or two—some well documented—about a pro-choice politician who has been turned away from the altar, but if we took a poll of every pro-choice and Catholic member of Congress, what percentage of them would report that this has happened to them? I’d venture to guess very few. And if we conducted a poll of Catholic priests, deacons and eucharistic ministers and asked whether they would deny Communion to a pro-choice politician who presented him- or herself, what percentage would tell us that they would? My guess is very few. And, not to put too fine a point on it, what percentage of those ministers of Communion would answer the same way regardless of whether there was a diocesan policy about such matters?

The all-engrossing debate will rage on, mainly because the issue touches on what it means to be a Catholic and an American.

I suspect that the data from this imagined survey would demonstrate that at least at a practical level, American Catholics have settled this question. And yet, the all-engrossing debate will rage on, mainly because (and this is the answer I give to my friends in Rome) the issue touches on what it means to be a Catholic and an American.

It is the question that has vexed Catholics from the moment we first stepped forth onto the shores of this culturally Protestant country. Which comes first: church or country? At the end of the day, that is what we are really talking about. It’s what we are always talking about, whether we know it or not. Think about it: Do U.S. senators question whether an Episcopalian should serve on the U.S. Supreme Court, given that the Episcopal Church in the United States strongly opposes the death penalty? Did anyone ask Justice Elena Kagan during her confirmation hearings whether she could be impartial on the question of Roe v. Wade, considering that the Rabbinical Council of Conservative Judaism is pro-choice? Of course not. Yet questions like these are routinely asked of Roman Catholics. But here’s the thing: They are asked of us because we ask them of ourselves. Amy Coney Barrett’s Catholicism was a matter of public debate mainly because Catholics publicly debated it. Why? Such debates don’t really happen elsewhere in the Catholic world.

My point is simply this: When it comes to Communion and pro-choice politicians, perhaps Bishop McElroy is right. Or maybe Archbishop Aquila is right. Or maybe they’re somehow both right and both wrong. Or maybe, just maybe, they’re asking the wrong question. And maybe that’s why we seem unable to ever answer it.

[Read this next: What a 60-year-old excommunication controversy tells us about calls to deny Biden Communion]